Wow, we have definitely fallen off the blogging wagon this past week and decided to buckle down with our coffee and tea this morning to catch our favorite audience up on our most recent travel events. After returning from Key West we all needed a couple of days to rest and recollect our thoughts back in Nassau. We spent the week in Nassau catching up on sleep, doing laundry, and attending to the seemingly unending list of administrative duties.

While in Key West, Steve discovered that a handful of the Nashville songwriters were heading down to the Abacos the following week/weekend and suggested that we put together a trip and meet them for a few days. With the decision made, it took Steve less than a day to arrange for airfare and find us a cottage to stay in for the weekend in Hope Town. The Abacos are string of islands located in the northeastern corner of the Bahamas teeming with beautiful water, beaches, and wildlife. Hope Town is one of the original settlements in the Abacos which today is a refuge for boaters and those seeking the serenity of the islands.

We took off from a small private airport on Thursday afternoon in seven seat Aero Commander 500 where I had happily jumped in the co-pilot seat to check off another lifetime first. 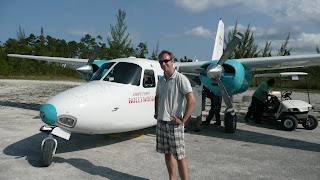 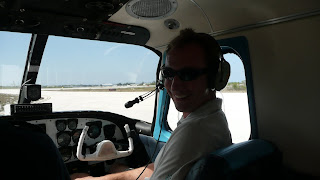 The flight lasted about 35 minutes and provided for some really great views of the islands from 6000ft up. We landed smoothly at Marsh Harbour and jumped in a taxi to rendezvous with Kylie at one of the local watering holes named Snappas. After rejuvenating ourselves with an ice cold Kalik we jumped back in our cab and made our way to the ferry which would carry us over to Hope Town. We pulled into the harbor at Hopetown to be greeted by this exquisite light house (which by the way is still operated by an onsite "keeper" who burns vaporized kerosene and manually cranks the rotating beacon): 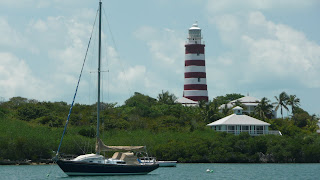 We got off the ferry and were warmly greeted by a young gentleman who walked us about a 100 yards to the "Crows Nest" where he informed us there was no key, because well, it's Hope Town, why would you lock your house? It was late in the day and all of the local stores were closed but lucky for us we were next door to Captain Jacks--a favorite local watering hole. We sat on our patio/dock taking in the view of the harbor peppered with boats from all over the world. 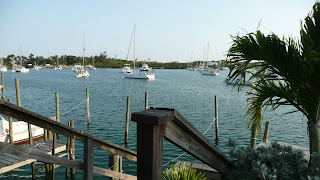 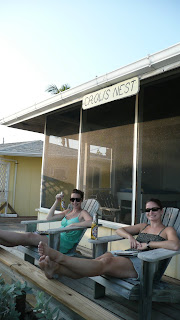 A golf cart and supplies (aka beer) were procured and we made our way to meet up with our other friends staying at the southern end of the island. They had rented a 27' center console motor boat which became our primary mode of transportation for the next two days. We scoured over the islands stopping at whatever beach looked the prettiest. The water was crystal clear so we simply would lay anchor, jump overboard with snorkel gear and swim to the beach or nearby reef--whichever suited your fancy. The scenery was absolutely stunning and I am kicking myself for not bringing a camera with me. (Luckily, our friend Shannan did and I hope to have some pictures to share with you in a week or so.) We swam through a beautiful reef park, visited the prettiest beach I have ever seen, where the water was so clear you thought you were in a swimming pool, and had a great time drinking Blasters at Pete's Pub.

I cannot emphasize enough how much I would recommend a vacation in either the Abacos or the Exumas where you rent a cottage/house and small boat. It is well worth the slight premium you will pay over staying at a resort--I guarantee.

After our long days in the sun and water, bed came early for Catherine and I. We did however enjoy a couple of nights sitting on our dock and admiring the sunset and stars. 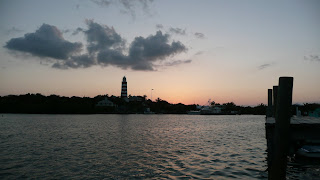 It was very hard to leave on Sunday. All we wanted was a few more days on that boat and to spend more time in the water, but alas it was time to move on. We made our way back to the airport and loaded up in Abaco Air's other member of the fleet a Britten-Norman BN-2 Islander. Apparently we had not gotten enough adventure during our Abaco trip because all nine passengers became instantly alert when 15 minutes outside of Nassau our little plane gave a noticeable lurch which clearly indicated something was very wrong. In fact there was something very wrong, our right engine was completely out of fuel and was puttering out rapidly. How about a picture to put this in perspective? This is not the actual engine that died, but it gives you some sense of how close you are and how weird it is to see that propeller stop spinning when you are up in the air. 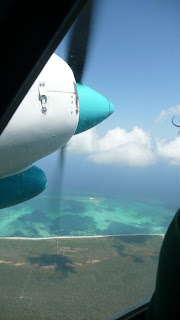 We were fortunate, the pilot did an excellent job. We made an emergency landing at the Nassau airport and were greeted by four fire trucks which all scrambled down the runway as we touched down. I think most of our nerves were shot when the plane pulled to a stop, but we were safe. I made a mental note to myself to make sure I always fly on planes with two engines and we packed up for home.
Posted by GOY at 5:43 PM