Yann loved the "class". He had to do five specialty dives over a day and a half including one deep dive and one underwater compass navigation. He said the first day was pretty silly in terms of the certification part of it. He did a wreck dive, an underwater naturalist dive (he identified some fish), and a boat dive (he identified some parts of the boat). A nice day of diving, but nothing new for him. 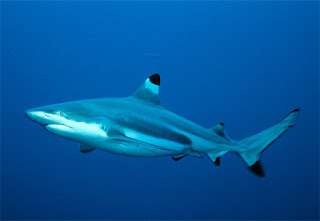 However, the next day was the deep dive and underwater compass navigation. He was supposed to dive to 120 feet. Once he and the instructor got down there, a black tip reef shark decided to check them out. The shark headed straight towards them and came within about five feet. Yann said he started to get pretty nervous and accidentally made it down to 130 feet, surpassing his previous record depth by 45 feet. He also said the underwater compass navigation was pretty easy; he just had to swim in an equilateral triangle and square to show that he could figure out the compass headings.

I, on the other hand, am not sure how I feel about diving. I'd like to think that maybe I'd learn to like it since I was even convinced that I hated snorkeling the first time I tried it.

I spent the first day in the classroom watching videos and reading the PADI book. Like a good little nerd, I got 100% on my quizzes and 98% on my exam--thank you Rice University.

The second day was a morning in the pool and an afternoon on the open water. The pool stuff was okay, I guess, but it's hard to get a feel for anything in five feet of water. My instructor also seemed more interested in getting the lifeguard's digits than in making sure I knew what I was supposed to be doing. The afternoon's boat trip was miserable. It was choppy and windy and I was really anxious by the time we got to the site. Once I got in, my brain definitely had issues reconciling being underwater and breathing. I AM NOT A FISH! Anyway, somehow, I got through it. It was only 20 feet, so that probably helped. I told Yann that I'd go ahead and finish my certification, but I didn't ever want to dive again.

The next morning was an even more miserable boat ride. We were going directly into the wind and just got beaten to death. I was even more of a wreck by the time we got there. Add that to the idea of going down to 60 feet....I started panicking when I got in the water. My instructor was trying to calm me down, but I definitely did not trust that 25-year-old twerp. I also had a hard time clearing my ears. Finally, after about three tries only getting down to 15 or 20 feet, I was done. My instructor was pissed and I got back on the boat with no intention of getting back in the water ever again. However, the second site was calmer (and only about 25 feet) and somehow Yann's instructor talked me back into the water. He was very trust-instilling and fatherly and, while I was still anxious, I managed to make it through the last few skills I had to do.

I guess I did it. I'm not sure I'll ever dive again, but Yann is convinced that if we go out on a clear day to a fairly shallow site, I'll try it again and learn to love it. We'll see. :)

We had dinner at Bobby Flay's restaurant at the Atlantis, Mesa Grill, with Steve to celebrate. We shared the shrimp and corn tamales and tuna tartare to start. Then Yann had the pork tenderloin, Steve had the filet mignon, and I had the snapper. The guys shared a bottle of Stag's Leap petit syrah and I stuck to a couple glasses of sauvignon blanc. I liked the snapper best, but Yann and Steve preferred the pork tenderloin. Regardless, it was a fantastic dinner--yum! 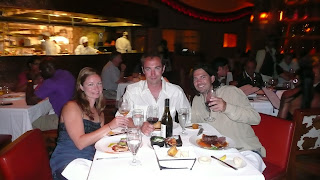 Posted by Catherine at 9:50 AM