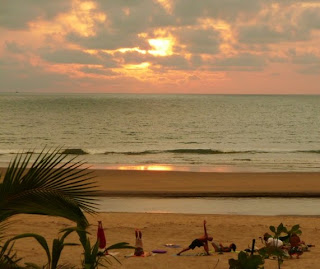 When we first started planning the Indian leg of the trip, I was going through a really lazy phase (and there have been many) and just wanted to find an ashram where I could scrub floors, do yoga, chant, and hang out for a month. However, I sent out a few emails to some people who are from or have visited India and they all said the same thing—-that there was a lot more to India than just yoga. Plus, I also had Charlie’s voice in the back of my head saying, “what, Catherine, you’re going to do the Eat, Pray, Love version of traveling around the world?” Anyway, we compromised and decided we’d see a bunch of sights in the beginning. Then, if I wanted to just find somewhere to do yoga until our visas ran out, I was allowed.

Goa had appealed to us for many reasons: the beach, the laid back vibe, and, the LP promised, there was yoga everywhere. When we arrived in Mandrem, we’d taken three yoga classes, all of which were very basic. The third one, in Palolem, Yann said was too basic even for him!

I found a place that did twice daily classes that was right around the corner from our hotel. By Indian standards, it was pretty pricy. However, at less than ten bucks per class, it was a bargain compared to back home. And it was WAY cheaper than actually staying at the mosquito-infested retreat that hosted the classes.

I’ve really enjoyed the classes, despite the mosquitoes (which really are that awful—I wear DEET to every class and still get bitten). They’ve rotated six instructors in the past two weeks, so there’s a variety of different styles and paces. All of the instructors are foreigners, but there’s definitely been more of a focus on the mindfulness and less on the exercise than any classes I’d taken back home (and the only other place I’ve ever taken classes, in Egypt). They also have a month-long teacher training class that’s currently in session and I’ve seen their schedule—-it’s a *lot* of meditation! [I’d actually considered taking the training, but our visas run out about half-way through.]

There’s another place down the road that also offers twice daily classes and they seem to have perpetual teacher training sessions as well. It looks about the same—-a bunch of youngish white women!

Maybe it’s different if you head up north to Rishikesh (where George Harrison tried to push the rest of the Beatles to seek enlightenment) or actually commit to an ashram, but it doesn’t seem like Indians do yoga down here. It appears to be something marketed to tourists who came to India to cleanse their minds and bodies… And since that’s how we’ve been treating it (hell, we’ve even been on the wagon for more than four weeks), I’ll take it. It just doesn’t feel very “authentic”. : )
Posted by Catherine at 10:39 AM