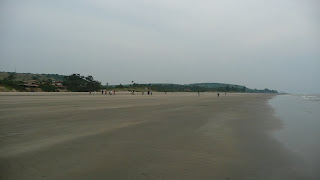 We arrived in Mandrem on Saturday. As we drew closer, I started to get more nervous. I just really wanted not to hate it and to be settled for a few days if not longer! We drove down a very sleepy road with a few restaurants and one clothing shop. At the end was Vila River Cat—-highly recommended by the LP and TripAdvisor.

Rinoo welcomed us effusively and sat us down to coffee and a sandwich while he proceeded to talk our ears off for over an hour. From the snippets I caught, Mandrem sounded pretty sleepy and perfect. There was even yoga at the hotel right across the river. Now if only he would shut up long enough for us to check out the beach!

Finally, we settled into our room and headed out to explore. First, we went across the river where the yoga classes were. The evening class was already underway, but I confirmed that they had yoga every day at 8:00 AM and 4:00 PM—-perfect. It turned out to be a yoga retreat center, so, while we were there, we checked out a couple of the eco-lodges. A couple seemed to have roaches and the whole place was mosquito-infested, presumably from being situated on the river. And then there was the exorbitant price—-no thanks!

We walked out to the beach and it was absolutely gorgeous! Perfect, really—-wide, flat, firm, and clean. It was also pretty deserted. Then we walked around “town” a little bit. The only thing that was really lacking was internet. However, that had been the case in Palolem (and, surprisingly, so many other places in India—-we’d really expected decent, if not awesome, internet here), so we figured we’d just deal with having to go to the internet café. We decided we could see staying in Mandrem for a couple of weeks.

The next day, we looked at the place next door to our hotel and they had a room right on the beach for about half the price. Like Palolem, there were tons of huts in Mandrem, but our new place had to be the best bargain on the beach—-solid construction, oceanfront, and reasonable price! (And, in my opinion, another major bonus was not listening to Rinoo every time we came and went.) We went ahead and reserved it for sixteen days once our stay next door was over. 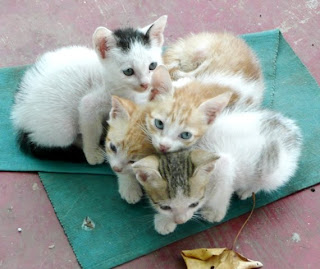 [The one drawback to leaving Rinoo was leaving the cutest kittens ever. There’s a reason it’s called Vila River Cat—-they feed quite a few strays and one had month-old kittens!]

We also walked up the beach about forty-five minutes to Arambol-—what appeared to be a backpackers’ haven. It was nice that there was somewhere else to walk to, but we were pretty psyched to be where we were. 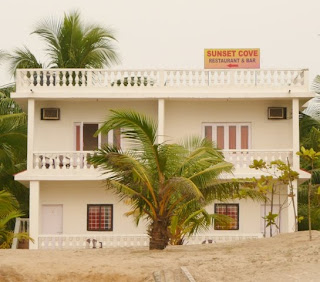 Posted by Catherine at 9:01 AM