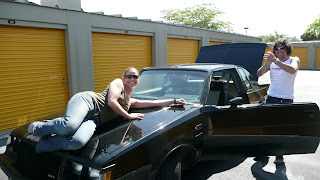 When Yann and I arrived in Miami on Tuesday morning, we spent a few hours online and on the phone taking care of administrative details while we waited for Steve to arrive from Nassau. He got in around 3:00 and we all piled into a cab to Billy Bob's Storage about 30 minutes north of Miami. Awaiting us in the storage facility was Steve's partner's 1988 Grand National: our ride down to Key West.
I'll be honest, I'm a girl and not really into cars. I didn't even know what a Grand National was. Hopefully, Yann will post something about this separately, since I know I'm not giving it the awesomeness I'm told it deserves. I also don't get why I had to post this very unflattering photo of myself laying on the hood. But I'm just going along with it. :)
The ride down was pretty and fairly uneventful. We made it in about 3-1/2 hours. Once we checked into our hotels and got cleaned up, we headed out to meet up with Kylie and her crew. At that point, they were well ahead of us and after dinner, shots were in order. We joined them for a few hours, but since Yann and I had been up since 4:30 AM, we called it quits just after midnight. I think most everyone else made it to closing and beyond.
Wednesday was gorgeous and relaxing. After our sandwiches at the vegan deli (we were seriously vegetable-deprived in DR and were so excited not to eat anything fried), we met Kylie and Steve at the pool at the Mango Tree Inn where they are staying. It may be my favorite pool ever--totally surrounded by trees and orchids. We had the area to ourselves and just chilled out and drank a few beers. Around 2:30, Kylie headed in for a nap before her performance that night. Yann and Steve went out to meet some people and I moved over to our pool to read.
As an aside, I think I expected more beach in Key West...I mean it is an island afterall. However, so far my experience is that it is far more of a pool and party town. Kind of like New Orleans in a sub-tropical setting. Or maybe I've already gotten spoiled in the short couple of weeks in the Caribbean!
A few hours later, we got cleaned up and headed out for a night of music. It was an absolute blast. Kylie played around 9:00 with two other guys. Awesome! Later that evening, Dr. Scott joined us and Robin made it in yesterday afternoon.
Yesterday was more sun and more music (including the lovely Courtney Jaye before dinner at Louie's Backyard), as I suspect today and the weekend will be as well. We are having a great time, but I suspect our livers are anxiously awaiting Monday! 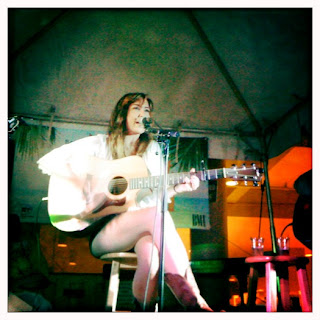