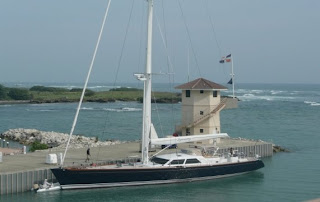 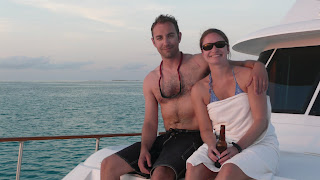 Since Yann's last post, we had a gorgeous trip from Provo to Ambergris Cay, the site of last Wednesday night's anchoring. I have never seen water so clear. At some point, Ross or Yann mentioned that it was like snorkeling without having to get wet.

Once we anchored (and by we, I mean Yann and Ross), the guys lowered the tender into the water, we grabbed our masks and snorkels and zipped around a bit until we found some interesting looking coral heads. I'll go ahead and put it out there, at this point, I'd never snorkeled before. I got into the water and felt panicky enough in the current and not really being able to use my snorkel, that I got back into the tender pretty quickly. Yann said it was one of the prettiest reefs he'd ever seen--not because it was so colorful and spectacular, but because it was so old and unspoiled. We then found an area with less current and, this time, I managed to snorkel--awesome! I'm really looking forward to doing so again.

After we'd had enough of the water, we figured we'd motor around the island. Sounded like a quick and easy enough jaunt, but no one had anticipated the amount of reef circling the island just barely under the surface. Major props to Ross for navigating the underwater maze in the early evening sun and returning us to Hammerhead with the tender intact.

For dinner that night: mahi mahi caught the day before and oh my goodness was it awesome! We were missing some essential grill part, so we did them on the stove, but it was definitely the best fish ever.

The next day we arrived at Ocean World Marina in Puerto Plata. We cleaned up the boat a bit and Yann and I settled into the apartment where we'd stay for the next four nights. The next four days were super relaxing. Yann and I hired a driver one afternoon and saw the sights in Puerto Plata and we had some serious beach time. We also sampled the local restaurants, had some awesome fish and the best ceviche ever. And a lot of Presidente.

So not only is Ocean World a marina, but there is also a casino and "adventure park". One of Ross' friends had arranged for us to see the show at the casino on Friday night. It was spectacular--they call it Las Vegas style, but I believe that Vegas actually stole this style from the Caribbean. Anyway, it was really fun: full of feathers and sequins and scantily clad women...what's not to like? And the men had some really...um *fancy* outfits. (Guy, we wanted to bring one back for you, but we just didn't have the room for all of the sequins and tulle)

Then yesterday, Kim had arranged shark/stingray and sea lion encounters for us in the adventure park. I'll admit I was a little skittish about swimming with the sharks and stingrays, but the sea lions were soooo cute. That was a really great afternoon--thanks, Kim!

Now for the cool part. Yann and I left our apartment last night for dinner and noticed that an ENORMOUS sailboat had pulled into the marina. We gawked for a few minutes and then walked on to dinner. About halfway through delicious grilled grouper overlooking the ocean, a bunch of guys walked out onto the deck and settled down at the bar. We decided they definitely looked like the crew of the huge sailboat. Once we finished our dinner, we ordered a couple more beers and made our way to the bar. I interrupted their conversation and it turned out that they were, in fact, the captain and crew aboard Symmetry, a 100ish-foot Cookson. They had arrived from St. Maarten and were headed on to Ft. Lauderdale. We had a lot of fun talking to them and managed to score an invite to check out the boat this morning before we leave. Hopefully, they'll still be up for it in the sober light of day! So we're off to do that and then we're leaving for the airport to fly to Miami!

I'll try not to let so much time lapse between blog entries...I recognize this was a kind of long and boring one. :)
Posted by Catherine at 9:28 AM