I'd like to share a brief(ish) rant on the health-related stuff. I've been very privileged never to worry about health insurance. During my time living at home and through college, I was covered under my dad's very nice and flexible BCBS PPO plan. Arthur Andersen covered me under an HMO policy. E&Y gave me my own first very nice and very flexible PPO plan. And once I started at Constellation, I was covered under a BCBS PPO plan. It was awesome. I saw whatever doctors I wanted to see, my prescriptions were covered, and aside from having lasik five years ago, I doubt I ever spent more than 500 bucks a year on health-related bills. Even my acupuncture was covered!

Obviously, on this trip, we didn't plan to have regular doctor's visits, but we did want to make sure we were covered in case of a real emergency. We were thinking high deductible, low monthly payments. After two solid months of following up with BCBS and waiving coverage on some minor pre-existing conditions, we are covered for our trip. This is also after Yann spent about three hours one afternoon on and off hold trying to get confirmation that we would, in fact, be covered on our trip. We got a lot of conflicting information. In retrospect, two months and a couple of long and irritating conversations doesn't seem so bad, but I was very concerned that were going to be denied coverage or that various bureaucratic issues (including trying to deal with the medical underwriting process while out of the country) would keep us from being insured. I really feel for people who have much more difficult pre-existing conditions and who aren't able to cover their medical needs during the lapse period between coverage. Dealing with insurance companies is not fun. And paying for coverage out of pocket is egregiously expensive.

THEN we got to deal with the joy of getting our prescriptions filled. In addition to the normal travel stuff: antibiotics, anti-malarials, anti-diarrheals, altitude sickness drugs, etc., I also have a couple of drugs I take on a daily basis that I'd decided would be easier to pay for out of pocket than to try to get filled throughout our trip. No one seemed to understand that I really did want a year's supply and that I really understood the implications of paying out of pocket. It took about a week of following up with doctors and pharmacies to be assured that everything was filled. It then took about three hours of arguing with the pharmacist in person and waiting for them to correct all of the mistakes to finally leave with all of our drugs.

The easy part (in my opinion anyway, Yann would NOT agree) was getting all of our vaccinations. We've definitely heard from various sources that we got overvaccinated, but I don't care. In the cases of weird neurological system-attacking diseases, I'd rather be safe than sorry. So thank you to the kind folks at the Hopkins Travel Medicine clinic who vaccinated us against hepatitis A and B, meningitis, Japanese encephalitis, rabies, typhoid, and yellow fever. And thank you to all of the scientists who came up with this stuff. I'm amazed by medical researchers.

All I have to say is that, between all of the vaccinations and drugs, I feel kind of bionic. 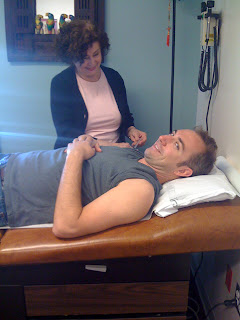 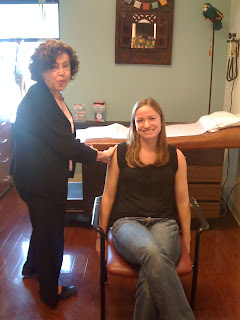 Posted by Catherine at 7:30 PM