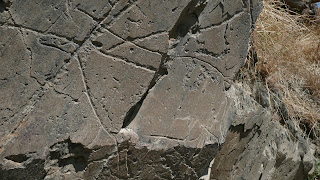 We left Manteigas bright and early and headed for the infamous Duoro region of northwestern Portugal. While at breakfast we sipped coffee and consulted our trusty Lonley Planet guide to devise our attack for this next destination. After a bit of reading we agreed to defer what promised to be a lot of wine tasting and instead spend the afternoon visiting the Paleolithic carvings located at Vila Nova de Foz Coa. It took us a little over two hours of winding through the mountains and interpreting our road map against post signs but we managed to find our way up to the town. There are three entrances to the archeological park and it took us a while to actually find one that appeared to be open. A neighboring vendor informed us the tour office was closed until 2pm and invited us in to his shop to spend some coin. Being completely starved, we politely told the gentleman that we were off to find food but would be back when the offices opened. Fortunately we found a little café not far from the park entrance—and trust me, we were pretty much in the middle of nowhere. Walking into the café we proudly displayed our week-long honed Portuguese skills which resulted quickly into relying upon Catherine speaking in French to figure out what was going on. Salted cod was what was going on and we accepted our lunch option with big smiles surprised at how un-salty the dish tasted—in fact, it was quite good cooked with potatoes, olives, and a bit of parsley. 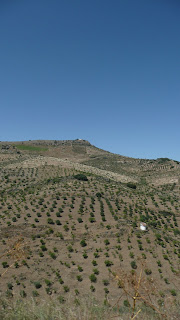 Back at the park’s tourist office at 2pm we were warmly greeted in English and informed that we could join a tour being led in French at 4pm that afternoon (yes, we should have made advanced reservation like Lonely Planet told us). However, as luck would have it a Dutch couple agreed to take a tour in English and the four of us piled into our guides 4X4 and headed down into valley to view the art of our ancestors which was carved in the stone over 10,000 years ago. 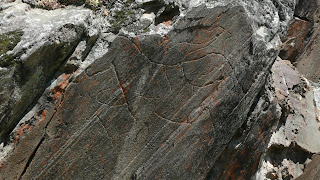 The five of us piled in a 4x4 jeep and made a 15 minute trip down 350 meters from the small town into the valley. Our guide did an excellent job of explaining the region's history, the story of how civilization had come to live here in the upper Paleolithic era, and some personal anecdotes of her own life and the Portuguese culture. 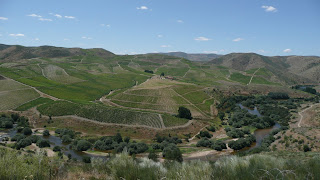 The archeological site was guarded by 24 hour security to prevent the findings from being compromised by vandals--crazy that people are the worst enemy, eh? The guide walked us along the river valley and sat us down in front of large flat rocks where she proceeded to point out the carvings of different animals in the stone.

Luckily we were shown sketched highlights before having to look at the rock and were able to pick out the three significant types of animals in display--goats, horses, and aurochs (an ancient ancestor of the ox). 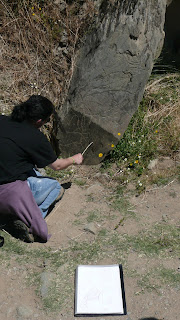 By the end of the tour we were basically pros at picking out the carvings and identifying the right animal. As our final test the guide pointed up on the hill near where we had parked and asked us to find the deer etched in the red rock. 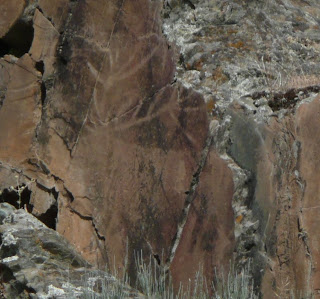 The tour was quite good (exceeding both of our expectations) and we managed to learn a thing or two about the region’s rich history.
The tour ended early enough that we had time to drive over to our next stop in wine country and find lodging in Pinhao. 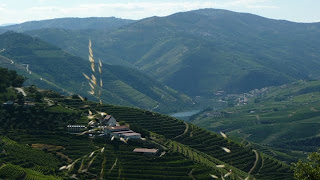