Vila Nova de Foz Coa was a pretty quiet little town aside from the paleolithic art that we saw. Not that it was a bad thing, but we decided we may as well drive further west that night and stay in a different small town on the way to Porto (all in about 3-4 hours away). The drive was absolutely beautiful and we stopped for several photos along the way. The slopes down to the Douro river are extremely steep and rocky and heavily planted with grapes, olive trees, and almond trees. Despite the dryness, it is really green.

The trusty Lonely Planet promised that Pinhao was an unremarkable small town on the river, but a good place to base ourselves if we were interested in checking out some of the local vineyards. It is one of the sections of the Douro region that seems to be the most densely populated with vineyards open to the public. As we got closer, it didn't look unremarkable at all, but quite charming. Since we were arriving on Sunday, I was concerned that most things would be closed on Monday (it seems that many touristy things are), so we decided to stay for two nights. We found an inexpensive hotel (Ponto Grande) across the street from the train station and got settled in before taking a walk down by the river and finding a couple of glasses of jug wine for just one euro (that's for both, not each)!

There was some sort of festival going on in town (we never figured out what it was for) that night and it seemed that all of the restaurants had closed early. We finally found one that was open (Ponto Romano) and it wound up being really fantastic. The waiter recommended the octopus, the veal, and an inexpensive bottle of wine. 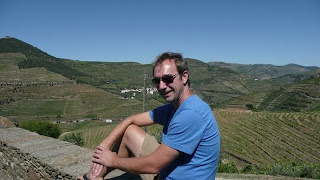 Feeling a bit internet-starved the next morning, we walked over to the fancy hotel (the Vintage House) and bought an hour of wifi to do a little trip planning and check some email. The restaurant looked good and we made a reservation for that evening. The concierge was also nice enough to recommend two vineyards that he knew would be open despite it being Monday. We decided to grab a quick lunch and check them out. Over lunch (which was quite long since this was during the game where Portugal kicked North Korea's @$$ in the World Cup), we noticed a couple adjacent to us with an identical Lonely Planet. I guess Yann was already getting tired of me, because he started up a conversation with them as they got up to leave. They turned out to be from Ottawa and on the last week of their three week-long honeymoon. We chatted for a bit and found out we were headed to one of the same vineyards that afternoon--maybe we'd see them again. 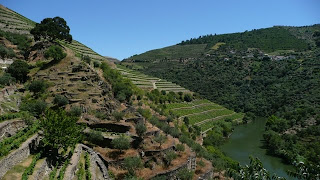 Our first stop was Quinta do Panascal who supplies grapes to Fonseca (among others). Before this trip, my only experience with port had been when someone brought a bottle of Taylor's over to our house to drink after dinner and I thought it was okay. I have to say honestly that even though I still don't love port, I think I now have more of an appreciation for both the process and the taste. Over the period of our two days in Pinhao, one day in Lamego, and two days in Porto, we visited Quinta do Panascal, Quinta do Seixo, Quinta da Pacheca, Caves de Reposeira, and the tasting rooms in Vila Nova de Gaia for Vasconcellos, Calem, Taylor's, and Croft. 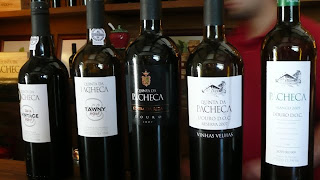 Unlike wine-tasting in California, each place offered a tour and explanation of their port-making process, so after hearing about it more than five times, it's cool to know more about it. A lot of these places still have groups of men stomping the grapes during harvest season! Our only complaint was that they really are only port-tastings--the only place that let us taste their table wine was Quinta da Pacheca, which may be the reason that it was our favorite (that and the fact that we kind of stumbled on it and it was much smaller than the others). I guess the upside to that is that you don't get much of a buzz tasting port (it's just too sweet to drink that much of it) and driving around to these vineyards is TERRIFYING with all of the super-steep drives! 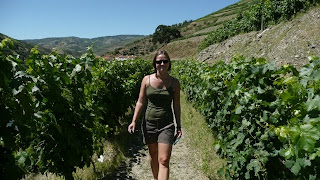 When we went to Quinta do Seixo, we ran into the couple from Ottawa again and invited them to join us for dinner. The Vintage House has a garden that is right on the Douro and is a beautiful spot for dinner. I think the food itself is a little overrated and definitely overpriced, but it was nice to have some company for dinner. They'd started their honeymoon in Paris and had been driving all over Portugal for the last week or so. We had a nice, long dinner and were eventually informed that we were free to move into the bar area (meaning: get OUT already!) 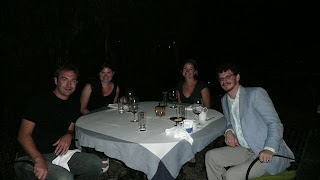 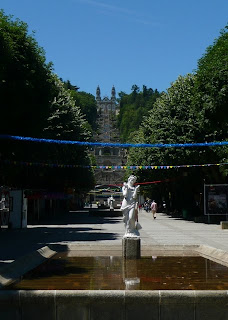 The next morning we were off to Lamego. It has this amazing church, Igreja de Nossa Senhora dos Remedios, with a bazillion steps leading up to it and hand painted tile murals. 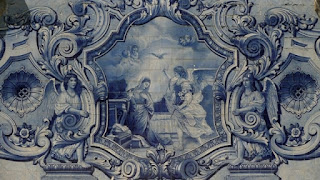 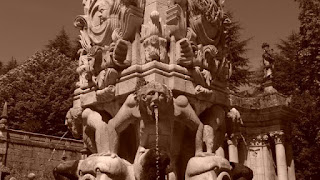 Afterwards, we inquired at the tourist office about tasting sparkling wine and also found out about a vineyard that also offered lodging and dinner, Quinta da Timpeiro. It wound up being perfect for that night. We'd done the tasting at Caves de Reposeira and it was about a half km away. We checked in and read by the pool until it was time to shower for dinner at 7:30 (super-early by Portuguese standards and a bit of a relief). 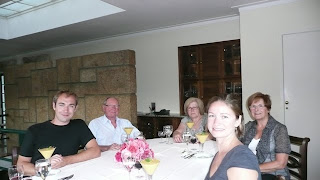 Dinner wound up being an older couple from Belgium, the innkeeper, and us. It was a simple, but very delicious, meal of vegetable soup, braised chicken, rice, salad, mango mousse, and fresh cherries. Yum! 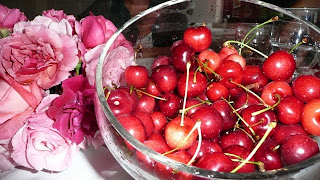