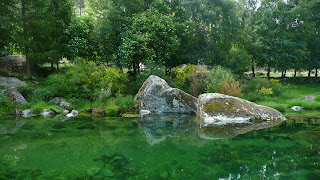 Our major goals in Portugal were eating and drinking. We knew we needed to fly into Lisbon, so we figured we ought to check it out at least while we were there recovering from jet lag. After that, the plan was to make a beeline to Porto for easy access to food and wine (and probably some port as well). However, we’d heard that the hiking in the middle of the country was supposed to be pretty good, so my job was to figure out where to spend our weekend on the way up north.

The Lonely Planet indicated that Portugal’s parks department is highly underfunded. Parque Natural da Serra da Estrela seemed to be the one with the best infrastructure despite the fact that its last trail maps were published in 2006. Of the small bordering towns, Manteigas sounded the prettiest with the best access to the park.

We arrived in Manteigas with minimal difficulty. Like Lisbon, the rest of Portugal does not seem to have the best marked street signs and Yann did stop once to ask some locals for directions. I know this will only get more difficult once we get into third world countries, but I doubt we’ll do much driving on our own there! I have to give my husband major credit here, while I’m better with languages, he is much better at communicating without a common language. 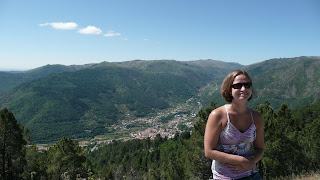 When we got into Manteigas we stopped at the parks department first since they are closed on weekends. As expected, they didn’t have any trail maps. Unexpected, however, was that French would come in handy here. I only speak enough Portuguese to order dinner and the ranger spoke very little English. Even though I haven’t spoken French since my first semester at Rice, we managed to get trail directions. After this experience, I’m even more excited to get to Morocco. I plan on having a separate entry ranting about how I hate not speaking the local language….

I’d already reserved our hotel room (yes, I AM the planner) at Casa das Obras. It is a completely charming converted old home that reminds me of a castle with its thick stone walls and cold air. It also has a pretty garden and pool across the street and a HUGE house dog—an Estrela Mountain Dog. I’d never heard of these guys, but they are sweet and cuddly and enormous. Hopefully, Yann will be kind enough to insert a photo. 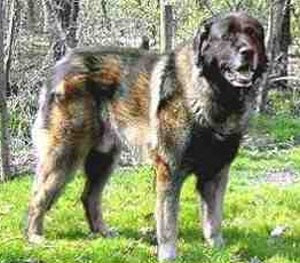 This morning we went on what Yann called the best hike of his life and I may have to agree. It started with the best breakfast ever of local goat cheese and honey, fresh bread and fruit salad, and a selection of cured pork products. Yann also got one of those custard tarts that he loves. This little inn is fantastic in its attention to detail. Even the calla lilies on the table were cut from the garden that morning. 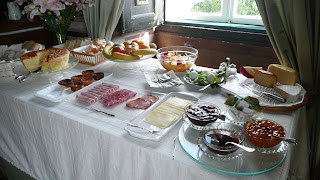 Side rant: I love Portuguese breakfast. I’ve been eating awesome cheese and ham on wheat bread every morning—YUM! 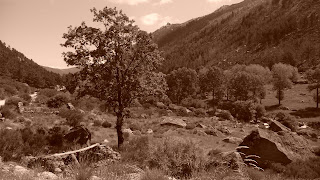 The “hike” started out at as a little bit of a disappointment. We walked about 4 km along a road and then along a goat path for another 4 km. However, the scenery was absolutely gorgeous. We were in a valley surrounded by mountains of beautiful plants and granite. Somewhere along the way, there was a local watering hole and a couple of small waterfalls. It was also pretty cool to see the local farming culture. At one point we happened upon a flock (do goats live in a flock? A herd?) of goats (including one baby goat which was the cutest thing EVER—I’m such a girl, I know). Not far away was their shepherd. He shouted to us in Portuguese and we waved stupidly saying hello and not understanding a word. 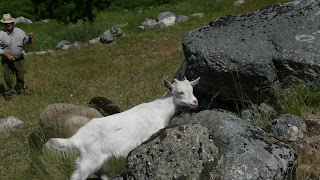 He finally got us to follow him up to his little house where he pulled out two rounds of his goat cheese. If only we had a way to store it, I probably would have bought four (or ten!) rounds! 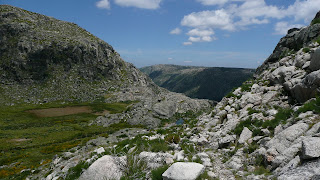 Anyway, after we got to the real part of the hike, it was pretty cool. I’d imagine our total elevation change over our 5 or 6 miles in was about 3,000 feet, with most of it in the last mile or so. 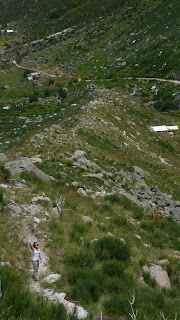 It was also much better-marked than we expected. The blazing wasn’t the greatest, but there were plenty of rock piles to keep us on the path. We ended with a ham and cheese (local goat, I’m sure) sandwich overlooking the valley. When we headed back, we saw two other hikers at the very end—the only two we’d seen all day! What an awesome hike: strenuous, cool mountain culture, baby goats, cheese, and some very unspoiled scenery. 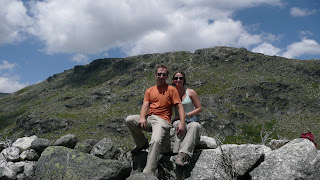 Now I’m off to shower before dinner at Dom Pastor, which promises a delicious meal incorporating local meat and cheese. We’re off to the Douro region tomorrow.
Posted by Catherine at 11:13 AM