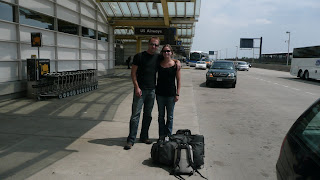 It is done now, we have officially moved east with no plans of turning back. We bid DC farewell early Monday afternoon for a short flight up to Philadelphia to catch our transatlantic over to Lisbon. It was a little surreal pulling up over the National Mall and heading away from home for what we hope will be at least one year. After 7 years working/living in the DC/Baltimore area it is the longest either of us have lived anywhere since leaving college. Although a little strange, we did not have a morose departure but rather were both excited
beyond words. 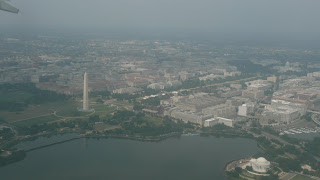 My idea was to make sure we were feeling ready for sleep by the time we left Philadelphia so drinks were in order. While my wife behaved herself
I worked to tie-on a reasonable "sleeping buzz" in preparation for the 7 hour flight. I have never made an international flight where the excitement
did not keep me awake, but finally managed to get to sleep after a couple of night-caps and listening to the first couple chapters of Jared Diamond's
book Guns, Germs, and Steel.

Wheels touchdown just before 8am Lisbon time and we made a remarkably quick exit through customs. Seriously, a dude jamming out to last night's favorite
techno jam gave us each a quick glance and stamped our passports. It reminded me of traveling in the states prior to 9/11 which was a much more pleasant
experience.

Our good fortune was temporarily shaken when we headed to the airport's ATM and watched one of our three debit cards eaten for security purposes. And for
this, I will cuss SunTrust bank until the day I die. But who they should really watch out for is Catherine who had spent nearly a half hour on the phone
with them last week explaining our travel plans.

It was an easy ride into the city by bus and we arrived at our hotel around 10:30am. They told us the room would be ready in a half-hour so we set about
to find some coffee and take a quick stroll through the neighborhood. As it turned out our location was fabulous and we were sandwiched in between the water,
two great neighborhoods, and the water. 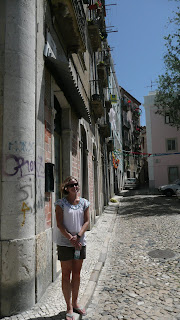 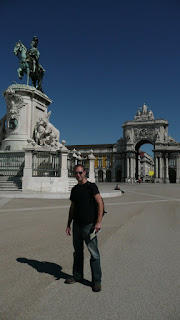 Dead tired we meandered back to the hotel and took much needed showers. The remainder of the day was spent hiking up the hill to Castelo de Sao Jorge
and exploring the local neighborhood. Our goal was to stay awake until 9pm and try to get back on a normal sleeping schedule. Exceeding our expectations we
made it until 10:30pm after an excellent Portuguese fish stew and a fantastic Duoro red wine. 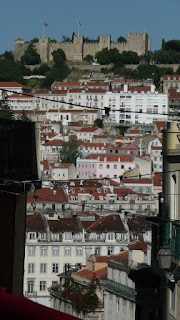 We managed to awake 12 hours later and have spent the day touring the neighborhood of Bairo Alto and the botanical gardens. Tonight we are heading back
to Bairo Alto to nibble away at the infamous night life described in our extremely handy Lonely Planet guide.

PS: Pictures to come shortly.
Posted by GOY at 3:24 PM