Porto: Gateway to the Duoro

After three days of winding (and I mean literally winding) through the Duoro valley and taking in the beautifully hand-built terraces of the vineyards we followed the river west towards the Atlantic and the historic city of Porto. I believe most people who visit the region make this trip in reverse, start in Porto then travel out into the Duoro, but I thought it was nice to follow the path those world renown grapes take every year starting in the vineyards, floating down the Duoro, and then being stored on the hill-side across from Porto in Vila Nova de Gaia.

Thus far on our journey navigating through the country side had been relatively easy and we found that the map we were given worked fine to get us from point A to B (granted, at times you had to be paying very close attention to signage). The ease of driving completely crumbled when we pulled into Porto and spent close to an hour trying to get from the interstate to our hotel downtown. I think we made about 5 passes at trying to find the right street to turn down and get to our hotel. By the time we actually found our accommodations we were both laughing at the ridiculous difficulty of navigating the city by car. 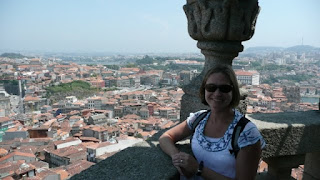 But all was well, our hotel was smack dab in the middle of the city and conveniently situated between the main avenue downtown and the waterfront where later that evening the city would transform into a sea of frolicking locals dancing, hitting each other on the head with plastic hammers, eating fresh grilled sardines and celebrating St. John's Day--Porto's biggest party. 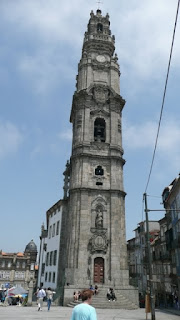 We had already mentally committed to indulging in the festivities and staying up to see the fireworks at midnight so we decided it was best to get some walking and sight-seeing in that first afternoon. Our first stop was at the Torre dos Clerigos a 76m high tower built in the 1700's which provided a birds eye view of the city. We climbed the alleged 225 stairs to the top (Catherine counted steps and disagrees with this figure)snapped a few pictures and made our way back down to take in the street vendors preparing for the nights festivities with displays of fresh garlic, garlic flowers, and plastic hammers that make a squeaking noise when used to bludgeon the nearest random stranger. 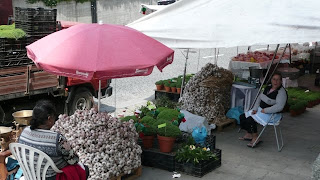 From the tower Catherine led us to our next stop at the old church Igreja de Sao Francisco. On the outside it looked much like your average run-of-the-mill several hundred year old European church, but boy was I ever surprised after we paid our admission and stepped inside. 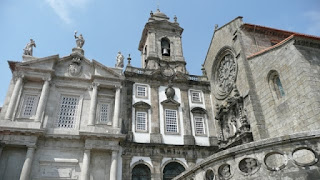 I have never in my life seen an more ornately decorated interior space. Every square inch (less a few areas vandalized by Napoleon's troops) was covered in gold plated wood carvings of cherubs, flowers, angels, and biblical scenes. Pictures were not allowed inside, but I was able to find this thanks to the information super highway: 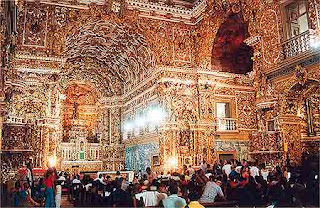 The city was awash with a festive spirit and we continued our walk along the water and across the bridge to check out the port houses that lay on the other side of the river. We searched dutifully for the two recommendations made by the LP but ended up lost and retreating back to sample ports readily accessible on the riverside. 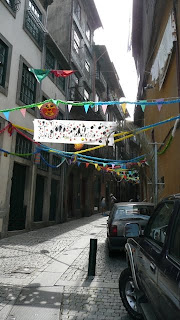 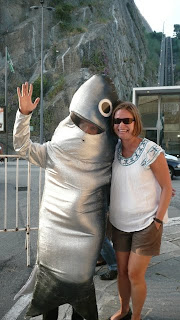 Heading back to our hotel to change clothes and prepare for the festivities we decided that dinner would consist only of items purchases on the street. Armed with warmer clothing and better walking shoes we took to the streets to join the party. We purchased plastic hammers to defend ourselves (and randomly smack the natives of our host city) and wandered through the city streets enjoying the sites and music that were reminiscent of a tame Mardi Gras. We had a lot of fun enjoying snacks that ranged from foot-long hotdogs covered with lettuce, corn, potato-chips and mustard to the infamous grilled sardine which is coveted as one of the country's oldest and most favorite snacks. Fireworks set off at midnight and lit up the sky directly over the Duoro river as everyone cheered and danced. Too bad we didn't have our camera along. 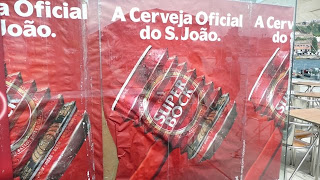 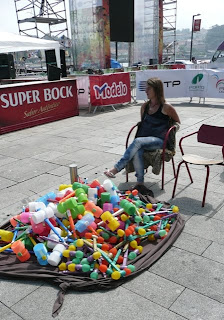 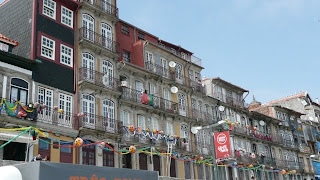 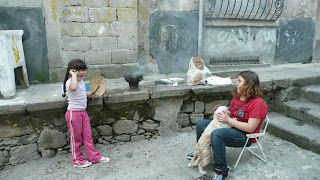 We spent our next day recovering from the indulgences of the festivities and creating a lengthy walking route around the city. One stop included finding the elusive Taylor's port house which had been on our list from the previous day. As we followed signs up the hill we were turned away half-way up due to construction. Luckily there was a map explaining an lengthy detour up the steep hill and towards the tasting room. As luck would have it, just as our spirits were falling out from behind a wall walks a gentleman whom inquires about our heading. The gentleman happens to be Adrian Bridge, the owner and managing director of Taylor Fladgate. He was extremely pleasant and walked us down the hill towards the tasting room while apologizing for the inconvenience caused by the construction of the group's latest hotel which had caused the original detour. After delivering us to the tasting room he instructed his staff to lead us down the shorter route back to the river once we were done. The tasting was interesting and fortified our week long education in the process of making port wine. I think we both have a new appreciation for this spirit for which we previously had no interest. 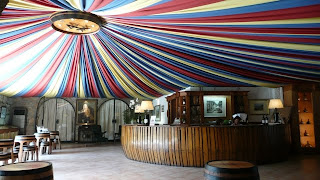 The remainder of the day was spent walking around the city and enjoying a quite evening before we headed south the next morning. And with that we wrapped up our visit to the world's oldest demarcated wine region.
Posted by GOY at 5:07 AM