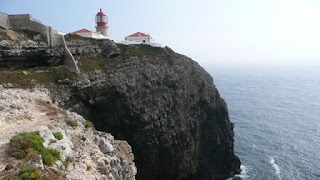 Woohoo--the beach!
On Friday, we left Porto to drive down to Sagres, the beach town that holds the southwesternmost point in Europe. According to the Lonely Planet, going to the beach without exploring all of the small towns in the Algarve (the southern region of Portugal) is to miss the point. Whatever, we came down here for three days to hang out on the beach, read, and do some trip-planning. [It's kind of weird, even though I know it seems like this entire adventure is one big vacation, it seems like we're going to have to plan to relax at times as well...we're still figuring out how we're going to set up routines to maintain our sanity....]

Our main criteria for picking a hotel was convenience and internet access. That may sound lame, but in trying to plan our next stages, the internet is definitely a necessity. So since we've been here, we've taken care of a lot of stuff for Morocco (that's our next stop), done a little reading, and done some sight-seeing. 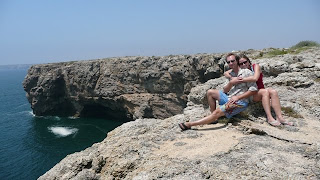 First, we went to the Fortaleza de Sagres, which was really cool. The fort itself wasn't that exciting, but the views were *amazing*. I don't know how high the cliffs are above the water, but we guessed 500 feet and that you'd probably die if you fell in. Shockingly, there were locals fishing over the edge! We actually also saw some scuba divers down there as well--BRRR!! Yann got some amazing photos (and I suffered many near heart attacks as he insisted on getting too close to the edge). Charlie and Dad, you'd love the photo opportunities. 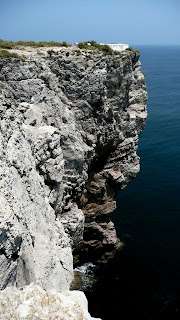 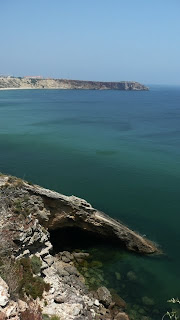 Afterwards, we went to the Cape of Saint Vincent, the southwesternmost point. I have to say it was really anticlimactic and we thought the views from the fort were a lot cooler. They also had the area at the actual point blocked off. Our plan was to chill out on the beach and return for the spectacular sunset over the Atlantic (having grown up on the east coast, that is just weird). However, at that point, the haze had completely set in and there was nothing to see. The wind was super chilly, so we just went to dinner. The octopus here is *awesome*. 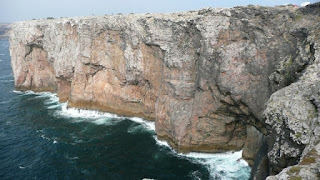 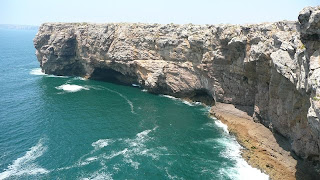 [Side note: if you ever come to Portugal, I'd highly recommend that you try the farinheira, just as a culinary experience. We find it absolutely repulsive--it's "sausage" made of flour, roasted peppers, pork fat, and a *ton* of salt. It made its way onto our cheese plate last night--yuck.]

Today is our last day at the beach and we're going to try to call some family this evening while we have this awesome internet connection. We've found that skype's phone calling feature is great. It sounds pretty good and it's only $0.02/minute to call the states. Tomorrow, we're taking a bus to Algeciras, Spain, where we should get the ferry to Tangier, Morocco on Tuesday. Then we'll take the overnight train on either Tuesday or Wednesday to Marrakesh! 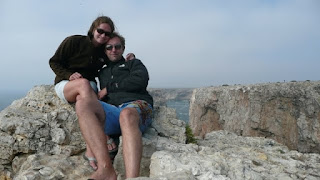 Posted by Catherine at 6:08 AM