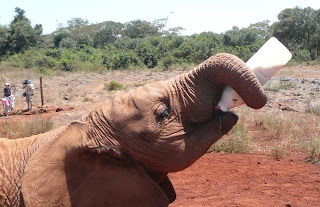 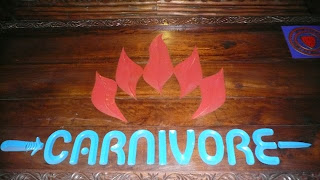 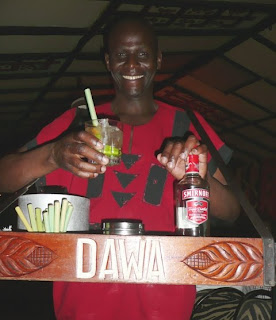 Carnivore is a dining institution in Nairobi. Tiffany had recommended it as a “must do” while we were in Kenya and I was naturally intrigued by the possibility of eating as much grilled game meat as I possibly could in one sitting. So on the eve of our last day in Kenya we set out to tackle the meaty dining challenge at Carnivore. Immediately upon arrival we were served Dawa cocktails and instructed about how we should use the white flag placed in the middle of our tower of sauces to surrender once we had had enough. After a few limited bites of lettuce we prepared out stomachs for the onslaught of charred flesh and ordered a bottle of full bodied red wine which happened to be blended specifically for the restaurant. No surprise, we were stuffed within an hour with our clear favorite being the ostrich, however, crocodile was the most exotic. 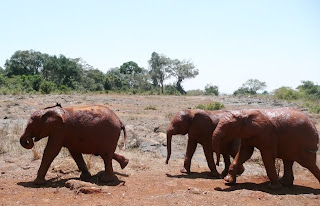 Our last day in Nairobi was spent taking in some of the other animal attractions we had missed before leaving on Safari. We visited the elephant orphanages and laughed over the group of 1-2 year old baby elephants who were having an absolute blast playing in a mud pit. They were like dogs and it was absolutely hilarious. They are all rescued animals typically from poachers but sometimes simply found abandoned. Once they are rehabilitated they are then released back into Kenya’s larger wildlife parks. 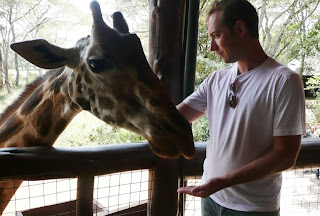 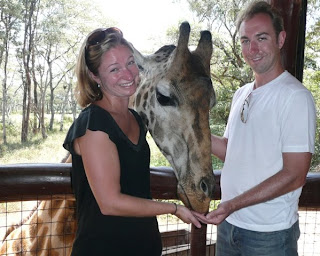 Next stop on our tour was the giraffe center where we were lured by the promise of both feeding and petting giraffes atop a custom constructed patio--how touristy right? We shamefully ponied up our money and made our way up the stairs where we let a long dark tongue slobber all over our hands but with a great picture of our very temporary giraffe friend. We wrapped our morning having lunch at the Karen Blixon estate and then sped back towards our hotel in order to beat rush hour traffic.

We packed our beds and sought out some amazing Indian food for dinner excited to move on in our global undertaking. Madagascar, here we come.
Posted by GOY at 4:48 AM