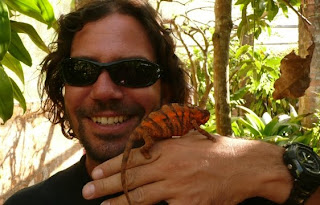 [That was an actual quote overheard at our super-swanky beach hotel in Ifaty. I don't know if it was a joke or if the guy's girlfriend really was that dumb.]

Waking up in Morondava on Saturday was super-awesome (minus my wicked hangover from the million THBs and glasses of wine from the previous night). We were about to ditch Rija once and for all. After flying back to Tana, Mamy would pick us up at the airport. Yann and Steve wanted to stop by the craft markets to find some malagasy instruments and then we'd be on our way to the Andasibe-Mantadia National Park, our last park of the trip.

Rija picked us up with a different driver--I guess he'd realized Yann was serious about not wanting to break down for the *ninth* (or more!) time on the way to the airport. Rather than just dropping us off, Rija came in with us to get us checked in--y'know, because we'd never gotten on an airplane before. Considering his lack of interaction to this point, I'm not sure why he chose this point of the trip to pick up his service skills. Perhaps it was damage control against my posting *scathing* reviews on tripadvisor.com or lonelyplanet.com! (I'm not actually going to post scathing reviews. But if I get around to it, I will post something as honest and diplomatic as possible. I know I appreciate it when other people do!)

Back in Tana, we collected our bags and met Mamy without incident. Yann and Steve reminded him about the trip to find instruments and we settled into the car. "So," asked Mamy, "how was the river?" The three of us immediately burst out laughing. I believe Steve was the one to respond with some colorful language. Mamy laughed and laughed and laughed as we told him the story over the next few hours. Apparently, we weren't the first ones to have had similar experiences.

At the market, Yann and Steve shopped hard--there was all kinds of cool stuff: drums, bamboo harps, bamboo and zebu horn maraca thing-ies, guitars, and on and on. In the end, Steve wound up with a guitar shaped like a zebu which was really awesome--*way* cooler than the one shaped like a lemur. Unfortunately, I think their excitement came through and the merchants wanted crazy amounts for everything else.

After that, we were on our way to Andasibe. Since we were getting a late start, Mamy proposed that we delay our long hike until tomorrow morning, but that there was a nature reserve where we could stop along the way. It wouldn't be expensive and we would see some reptiles, including crocodiles. We agreed quickly and didn't think anything more of it. 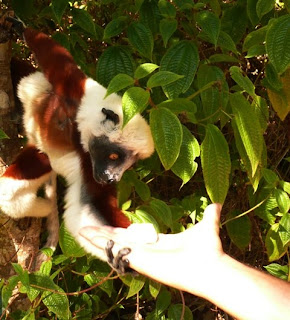 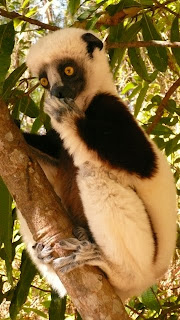 A few hours later, we pulled up to Mad Exotic Reserve Peyrieras. We paid our entrance fees, hired a guide (Philippe), and were off. Our guide quickly pointed up to another group of people--oh cool, they were looking at lemurs! It was amazing how close you could get to these guys; they were the tamest ones yet. Our guide pulled out a banana, broke off a piece and tried to hand it to me. Huh? Oh, *that's* why they were so tame--they got fed by the visitors! I'm not a big fan of being too close to wild animals (and then there's also the fact that feeding them is just wrong), so I passed on the whole experience. Yann and Steve, however, let temptation get the better of them and, despite the political incorrectness of the whole thing, they said it was pretty awesome. They'd hold out the banana in their palm and the lemur would grab their hand, pull it to its mouth, and eat the banana. Yann's first comment was, "Oh, they have soft little hands!" 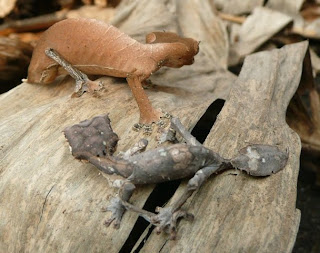 Then we moved on to the reptiles. It looked like these guys had trapped all the local lizards, snakes, etc. and put them in cages. Everything was available for poking, prodding, petting, feeding, and man-handling: geckos, boa constrictors, chameleons, frogs, bats (the poor bat looked so scared), and various insects. Yann and Steve were stone-cold sober and giggling like little kids. At one point, they remarked that the reserve should be called "The Guilty Pleasures Park". We all knew it was wrong that we were there, but there was just no way to pass up the opportunity. (although I'm a little surprised no one was bitten) The only limit was with the crocodiles--you weren't allowed in their pen.

On our way to Andasibe, we told Mamy we'd skip the night hike. We felt like we'd seen enough mouse lemurs, chameleons, frogs, and snakes on our other walks and maybe we'd engaged in enough inappropriate interactions with animals for the day.

Once we arrived, we got settled into our bungalows where Steve realized that Rija had screwed up his return ticket for the end of the trip--he'd only have 25 minutes to make an international connection. WTF?! And this guy is a travel agent?! Steve figured there was nothing to be done at this point, so he'd have Mamy talk to Rija while we went on our hike in the morning. 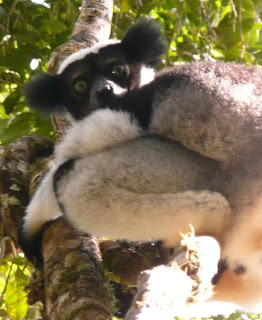 The hike the next morning was pretty awesome: we saw a ton of brown lemurs, some small nocturnal lemurs that were sleeping, plenty of birds, and the indri--the largest lemur. Indri are only found in this particular region of Madagascar, so we felt really lucky to see them, especially so close. They are also really loud and use their cries to stake out their territory. When we stumbled on them and they all started making noise, it seriously sounded like some sort of emergency siren!

When we got back to the car, Mamy had bad news for Steve. Our plan had been to drive to Mahambo tonight, get the ferry to Ile Sainte Marie tomorrow, spend two days on the water, and fly back to Tana. Since the flight the day earlier was full, Steve would have to take the ferry back to the mainland and drive back to Tana with Mamy. Basically, he'd get to Ile Sainte Marie, spend eighteen hours, and turn back around to catch the ferry and then drive for twelve hours. Ugh! 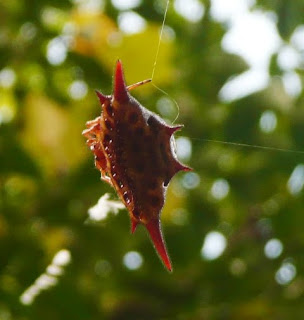 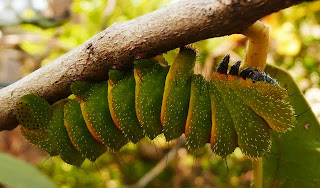 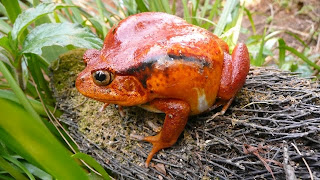 Posted by Catherine at 8:09 AM