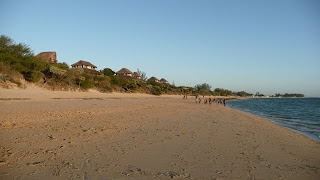 On Tuesday, we left Ranohira bright and early to get to Ifaty on the southwestern coast. We were both really psyched. It was supposed to be very pretty, remote, and full of really bizarre plant life. We'd also finally get to see some baobabs!

Around noon, we stopped in Toliara for some lunch and then continued the last 40 km to Ifaty. Considering how popular Ifaty is with the tourists, I was shocked at the condition of the road--the 40 km took about an hour and a half!

We'd decided we'd splurge a little on our hotel in Ifaty and had two recommendations we wanted to check out. Mamy was heading back to Tana after he dropped us off, so the plan was to drive all the way north to look at the less expensive one and, if we didn't like it, we'd go back to the more expensive one on Mamy's way out of town. Unfortunately, we ran into some car trouble along the way. Mamy was confident he could fix it no problem, but didn't want us to have to wait on him. After minimal arguing, we got into a taxi to go to the hotel in the north.

There was absolutely nothing wrong with the Bamboo Club, but it was completely deserted. And maybe not quite as nice as what were hoping for. I mean it was clean and on the beach and they could arrange diving for Yann....but after about twenty minutes, we decided we just really didn't want to stay there. As inexpensive as Madagascar is, we really really really wanted to stay in the nice hotel. (and by "we", I probably mean "I".)

Unfortunately, at this point, the driver had already left. It was really embarrassing to tell the reception (in broken French) that not only did we not want to stay there, but we'd also like him to arrange transportation for us to go to another hotel. I felt like a real ahole. The guy was much nicer than he needed to be and made a few phone calls. Finally, he told us that one of his security people would walk us to the village where we should be able to find a ride.

Along the way, the security guy kept telling me that if we couldn't find a taxi, we could do something that I didn't understand. I assumed he meant maybe find a ride with someone he knew? I'd really have preferred to walk the three-ish miles, but knew that we'd probably be hassled a bit. 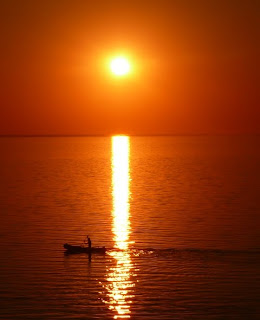 When we reached the village, we waited for a few minutes and he told me again that we could do the thing that I didn't understand. Next thing we know, two young guys roll up in a cart pulled by two zebu (very similar to cows). This was our ride! We negotiated the fare (about five bucks) and climbed in.

The ride was fairly uneventful except for the fact that zebus (or these zebus anyway) have digestive issues, liquidy bowels, and are a bit ornery. Our two drivers alternated beating these poor animals with a stick and "steering" them with their tails. And their tails are right by....right. Gross!

After our hour-long bumpy ride (where we noted that Mamy was no longer stopped, so he must have finished his repairs), we rolled up to the fancy boutique hotel. Yann paid our drivers and I talked to reception. They had a bungalow on the beach available and they could arrange a dive for Yann the next day--perfect. 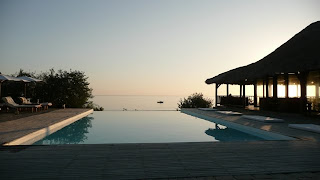 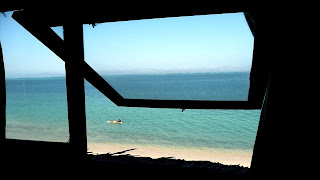 We were walked out to our bungalow and oh my goodness I got over my embarrassment about leaving Bamboo Club. This place was absolutely gorgeous. It was set right back from the beach and hidden by a bit of spiny plant life. There were two levels with THE most gorgeous view of the Mozambique Channel from our bedroom.

We quickly got settled in and went for a long beach walk. We got back right around sunset, which we enjoyed with a cocktail on the deck of the restaurant overlooking the water. Life was pretty awesome!

The next day, we did beach stuff: slept in, Yann dove (and was very excited to see six humpback whales frolicking at the surface), I read, and we got two long beach walks in--magnificent! 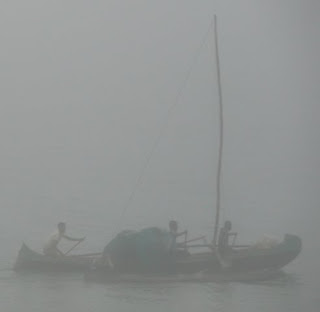 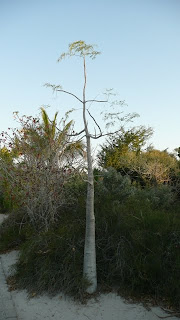 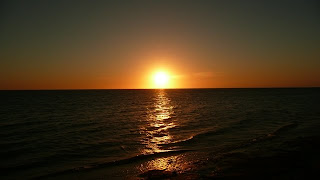 Posted by Catherine at 9:33 AM