To the East Coast 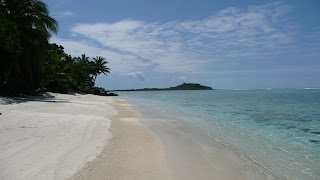 Our hotel in Mahambo, La Pirogue, was incredibly lovely. Of course, Yann and I got the only room without hot water and I had the embarrassment of politely asking about it three times before finally not so politely asking to change rooms at 10:30 PM. Man, I hate to be unreasonable shrew, but this whole trip was so full of cold showers and we'd been hiking that morning...I just couldn't deal. We were starting to feel like it was time to move on from Madagascar. 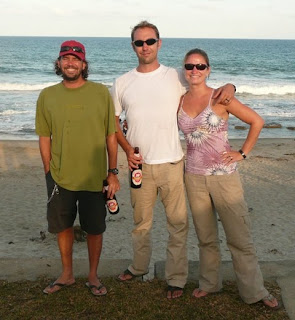 Over dinner, we managed to convince Mamy to come to Ile Sainte Marie with us rather than waiting on the mainland. We also managed to teach him some very impolite language over dinner and a few (too many) beers. Ah, making our mark on the world! 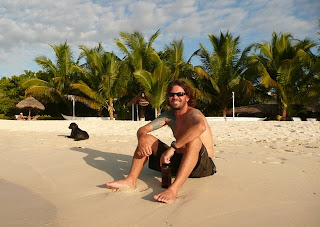 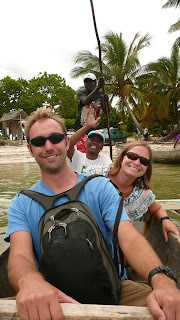 The next morning, we got up really early to catch our ferry. Good thing we were on time because the ferry was only two hours late. A driver met us and took us to the end of the island. We were actually staying on Ile aux Nattes, a smaller island directly to the south to which there was no bridge, so guess what was awaiting us after we got out of the car? That's right, another canoe--our favorite! We piled in and the piroguer paddled us about twenty minutes away to a very lovely group of bungalows. The white sand beach was wide, deserted, and absolutely gorgeous.

We settled in and had one of our favorite meals so far: calamari stuffed with local fish in a tomato sauce--delicious! The rest of the day was beach stuff, walking, swimming, reading, napping... Upon showering for dinner, we discovered that there was no hot water, again. However, here, they'd bring you a bucket of scalding water, so you could mix your own standing bucket bath. It was actually really awesome! 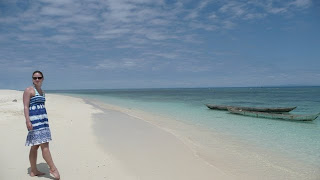 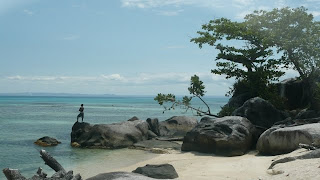 That night, we bade Steve farewell over one last zebu steak--he had to leave around 5:00 the next morning. Between our multiple THBs, the discovery of some French wine (the owner was French), and a lot of cursing of Rija, it was a fun time. I suspect the blog-inappropriate stories of the past two weeks will be around (and embellished) for years to come!

Yann and I spent a quiet day and half on Ile aux Nattes before flying back to Tana. The next morning, we walked the entire circumference of the island and it was every bit as remote and beautiful as we'd thought originally. And that's where we decided that the best and worst parts of Madagascar are exactly the same. It's expensive and difficult to get to, which makes it unspoiled, deserted, and amazingly gorgeous. And since there are so few tourists, it isn't very expensive once you get there, but it's also a little rugged, even in nicer accommodations.

Anyway, if you have the time and the money for the plane ticket, I think we all highly endorse Madagascar. It was definitely Yann's and my favorite country so far! 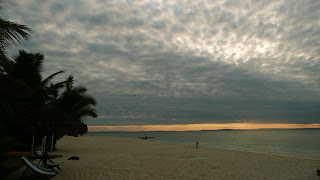 Posted by Catherine at 9:14 AM