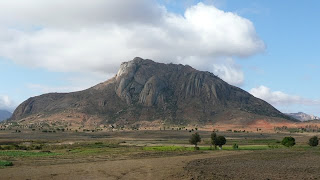 We got a fairly early start today—our guide, Manal, met us at the hotel around 7:00 AM and, after breakfast, we were on our way to the Anja Reserve. We’d read that the main attraction was the abundance of ring-tailed lemurs. Apparently, they are some of the most sociable lemurs and there are about twenty groups of them living in the reserve. Also, we were in luck since a bunch of babies had just been born. 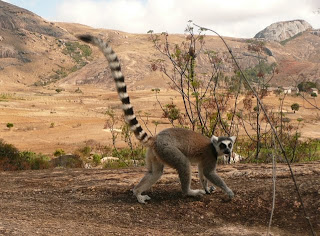 We’d only hiked in about ten minutes when we saw two of them sunning on a rock. This later turned out to be four—at first glance, you didn’t see the two babies nursing. And then off to the side, were a whole bunch of other ones. And then in the trees, there were more—ring-tailed lemurs were everywhere!

Manal told me that the lemurs typically get up and bask in the sun for an hour or so before they go looking for food—sounds like a pretty good life to me. After Yann had taken about a million photos, we walked for ten or fifteen more minutes and found another group of them. 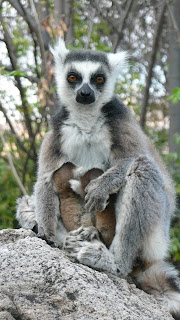 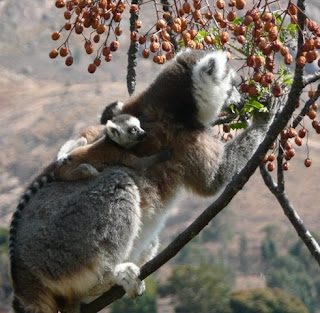 It isn’t too exciting to tell you that we kept seeing lemurs, but I’d estimate that saw at least sixty, with about ten of them being babies riding on their mothers. Here are the highlights:

* They are really really really cute.
* The babies are even cuter. Manal told us that up to six weeks they cling to their mother’s chest and then after that they ride on their backs. To us, it looked like they just hung on to whatever they could grab. The mothers didn’t seem too movement-restrained by them.
* They love to sunbathe. My favorite is when they sit on their hind legs and bare their chests to the sunlight. With their front paws resting on their…knees? Do lemurs have knees?...they look like they are meditating.
* They let you get extremely close to them, probably about ten feet away.

We also saw some really cool chameleons and a few birds, a sand martin? and some black kite, but that all took a backseat to the lemurs, unfortunately. It was also just a really nice hike. As always, it’s nice to be outside moving around.

Randomly, we ran into a group of Brits with one of them harnessed to a rope in a tree. It turned out they were making a documentary. They’d already gotten their lemur footage and were now doing some scenic shots. Unfortunately, they seemed pretty busy; otherwise we’d have tried to find out what their documentary was about. I’d be interested to hear what the new, unique angle was on the lemur documentary.

Afterwards, we got back in the car to go to Ranohira, close to Isalo National Park. As we drove, the scenery started to change into barren desert with the occasional twisted-limb, barbed tree. Along the way, we stopped for some real Malagasy food—yum!

A few hours later we arrived in Ranohira and checked into our very charming stone bungalow. We met our guide for tomorrow’s hike in Isalo National Park and it sounds like it’s going to be great: about 12 km of waterfalls, canyons, new plant life, lemurs, birds, and other fun stuff! 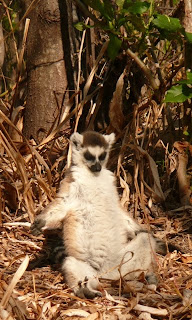 Posted by Catherine at 4:24 AM