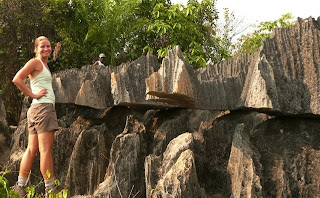 Well, as Yann mentioned, the first cool part about being at Tsingy was the sheer awesomeness of accommodation. I'm sorry if we sound like divas, but maybe we all do have a little bit of princess in us! They even agreed to wash some of our river-repulsive clothing overnight. Anyhow, shortly thereafter, we went to the park to meet our guide, Philippe, and hike the shorter trail (Petits Tsingys) that was in the section of park closest to the village.

Philippe gave us a brief lecture about fady (taboos) in the park--keep it fairly quiet and don't point at the spiky limestone formations (the tsingys) or anything else since we would be surrounded by sacred things. Since the river had been such a letdown for viewing wildlife, we had no trouble agreeing to keep quiet. 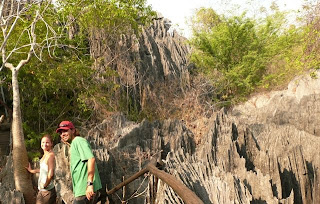 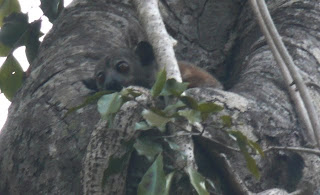 Philippe led us in and around the tsingys and it was just really gorgeous. We didn't see a ton of wildlife aside from one small lemur, but we did get a nice hike in and with some amazing views. He also pointed out some tombs and ceremonial areas used by the local Sakalava tribe.

As we headed back, Philippe asked if we were interested in a night hike. Yann and I had done one in Ranomafana and, while I don't think it's the coolest thing ever (and it can't be that nice for the animals to have blinding lights shined on them), it's definitely worth doing and Steve definitely needed to see a mouse lemur (and chameleons, frogs, and snakes). The only trouble was that Rija was supposed to cook us dinner that night. His cooking thus far had not warranted ever changing plans, but it was still kind of a delicate subject to broach. Finally, we told him that we would pay for our own dinner (we actually didn't even realize that this meal was randomly included in our tour) at the hotel and catch up with him in the morning. 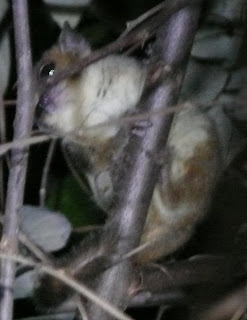 About an hour later, after grabbing flashlights and insect repellent, we headed back out. We saw everything that Philippe promised: mouse lemurs, frogs, a snake, and about a million chameleons. Steve proved to be quite the naturalist and pointed out the most visible mouse lemurs. Man those things are cute! Yann also found some sleeping flies. How he found them, I have no idea! 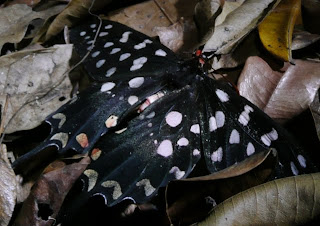 We told Philippe we'd meet him bright and early for the next day's hike at Grands Tsingys, about an hour away. Back at the hotel, we'd pre-ordered dinner: zebu meatloaf for all three of us and paired it with some South African wine--delicious! 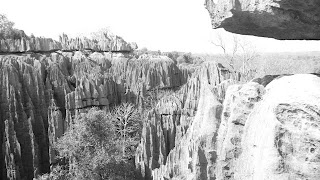 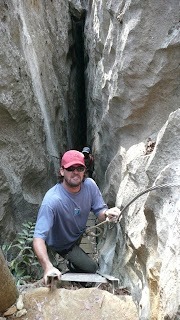 This is going to shock you guys...the next morning, we broke down on our way to Grands Tsingys. I'm not sure whether it's hilarious or ridiculous. The best part was that the reason he stalled out to begin with was just plain crummy driving in too high of a gear going up a series of bumps in the road. Philippe laughed his head off about the car, the driver, and us. Okay, maybe it was a little over the top even for a developing country if Philippe thought it was that crazy.

Finally, we made it and set off on our hike. Philippe had brought us each a climbing harness--cool, we didn't know this hike would be so hardcore! Well it turned out not to be *that* cool...you could clip into various lines along the way, but it was absolutely unnecessary. However, it was an extremely gorgeous hike--even more impressive than the previous day. The coolest part was that we decided to exercise our obnoxious American genes and insist on passing a few slower and much noisier groups ahead of us as we were leaving the tsingys and entering the forest. About twenty minutes afterward, we saw *two* groups of six white lemurs each (and each with a baby). Definitely worth my cringes! 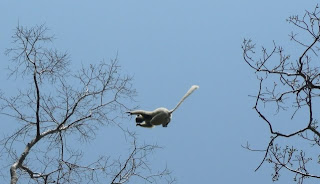 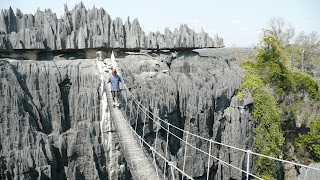 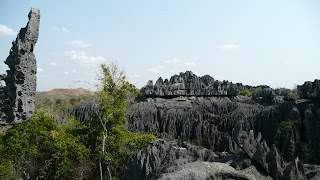