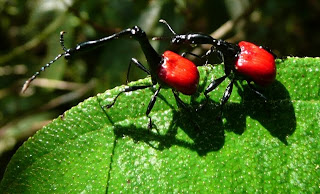 It is definitely true that you need someone who speaks at least a little French in Madagascar in general and someone who speaks Malagasy in the villages. English definitely had not been taking us very far. Mamy had told us that our guide claimed to speak English, but we could be the judge of that and that we didn’t have to hire him.

After breakfast, we met Jeannot, who was pretty darn quiet. We weren’t sure he spoke, period. However, the whole situation was so awkward; we figured at least he knew the way and that would be good enough. We made our way over to the park, paid our fees and were on our way. 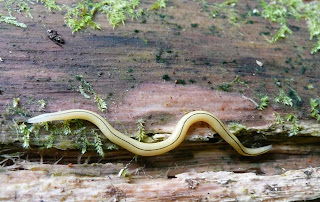 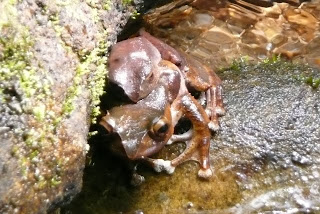 Luckily, Jeannot perked up a bit once we got going and he turned out to be very nice and informative. Within about ten minutes, we had found a golden bamboo lemur!

Along the way, he pointed out various plants, small lizards, and insects. As we were turning away from a leaf-tailed gecko, I saw a dark brown furry tail—what was that? It turned out to be two female red-bellied lemurs. I could not *believe* how close they let us get to them! 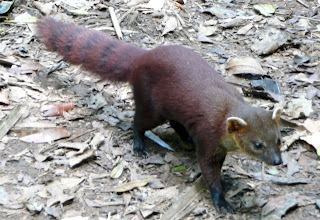 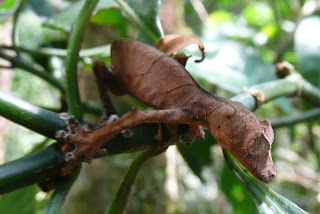 It turned out to be a great hike. Having not been very active in about two weeks, it was a really nice workout and we got to see plenty of cool critters and plants. All in, we saw: a golden bamboo lemur, two red-bellied lemurs, seven brown lemurs, one greater bamboo lemur (the largest of the bamboo-dwelling lemurs), giraffe beetles, frogs, crayfish (no crawfish in Madagascar), magpie robin, a leaf-tailed gecko, common geckos, and a weird yellow worm that Yann “discovered”. As for the plants, we saw: pineapple plants, raffia trees, banana trees, giant tree ferns, a million other ferns, orchids, huge bamboo, elephant ears, pallisandre , and probably so many other things that I will never remember.

After chilling out for a couple of hours that afternoon, we went out for our night hike. We took headlamps along and even if we hadn’t been looking for animals, I’d have wanted one—I don’t think I’d ever been anywhere so dark in my life! We saw several mouse lemurs (the smallest lemur, they are *so* cute), about a million small chameleons, quite a few large chameleons, and a bunch of frogs. I don’t know how Jeannot was able to pick out all of these things in the dark, but it was really cool. 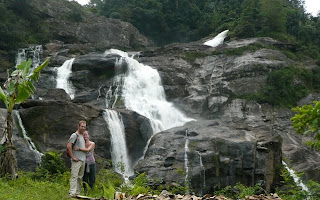 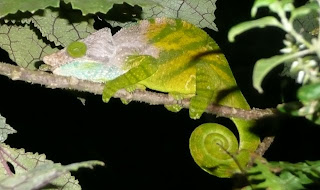 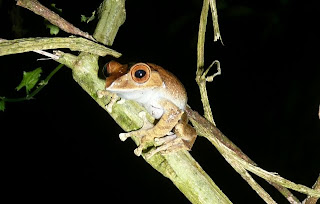 Posted by Catherine at 4:16 AM