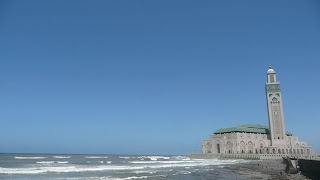 I'll be honest, Casablanca is not one of my favorite cities. We weren't planning to visit, but as we were making plans to leave Morocco, it seemed to make the most sense from a timing and cost perspective. Last Wednesday, we arrived by train from Fez to spend three days before our flight to Cairo on Saturday night.

When we arrived and headed towards the taxis, we were intercepted by a young man who led us toward his taxi. Yes, it would cost us 50 Dh and, no, he wouldn't turn on the meter--NO ONE does that in Casablanca. Oh well, par for the course leaving the train station with our backpacks looking oh so American. Later, it turns out ALL taxi drivers in Casablanca run their meters and that ride from the airport should have cost 10-15 Dh. But sometimes it's just easier to be happy that you're hotel-bound and not haggling over four dollars.

Our hotel was the trusty LP's choice in budget hotels. It was neat and clean and management was extremely welcoming and helpful--even going so far as to write down hotel and street names in Arabic in case we needed to ask for directions. That night, we had a wonderful fish dinner near the port and hit Rick's Cafe for a post-dinner drink (yes, that was for you Dad and Debbie. :) It was actually a really pretty bar and restaurant with a piano player to complete the nostalgia. However, the restaurant has only been there six years and the inspiration for the movie was actually Tangier...)

The next day we visited the Hassan II Mosque: the third largest mosque in Africa and one of only two open to non-Muslims. Everything about it was over the top--the half billion dollar construction took seven years and one-third of it is suspended over the water. It was really ornate and beautiful and boasts the tallest minaret in the world at 210 meters. It can hold up to 105K worshipers and our guide says it gets close to that during Ramadan. It even has a retractable roof! I'll let Yann's photos speak for themselves once they get uploaded. 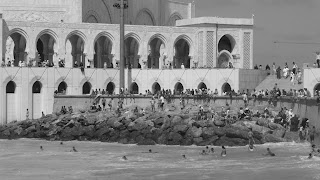 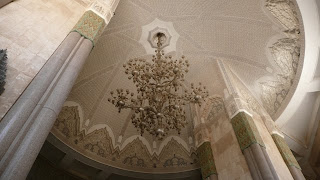 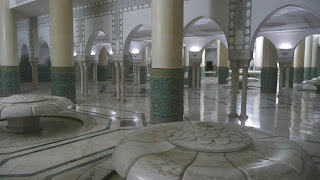 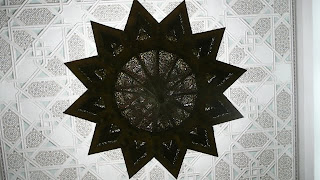 The second night, we had dinner at a Mediterranean-influenced French restaurant that was really amazing. I even got to have cheese for dessert--I was so excited! And the third day, at lunch, we discovered the best shwarma place ever and had Spanish tapas for dinner. Since the desert tour, we didn't eat much traditional Moroccan...but we did eat a lot of really great food in Casablanca. 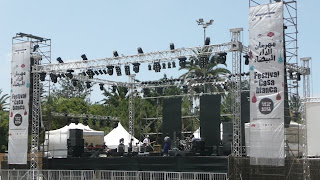 Another cool thing is that our visit just happened to coincide with the Festival de Casablanca: a four-day-long music festival. We hadn't heard of most of the bands, but Sean Paul (the reggae, dancehall, hip-hop guy that I'm not very familiar with) played on Thursday night and Missy Elliott was slated to play on Sunday night after we left. We missed Sean Paul, but we did see two bands we didn't know on Friday night. One was Moroccan heavy metal.... It was fun and definitely different. There was a VERY small area blocked off where you had to pay to get in. The rest of it was just people standing around, taking it in for free. The shows didn't start until 10 and definitely went well past 1, but everyone was out: kids, grandparents, everyone... 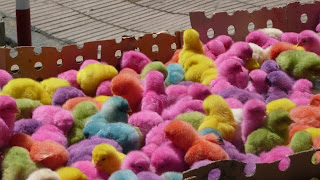 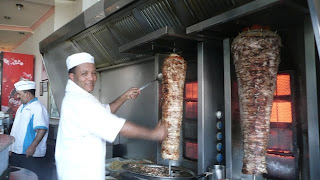 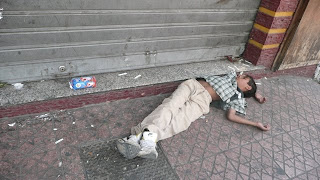 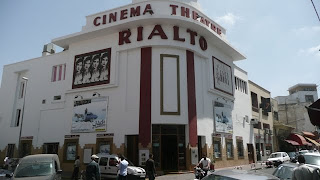 I guess I didn't make Casablanca sound so bad--great food, random music festival... However, for the most part, we just didn't know what to do with ourselves. It's the financial center of Morocco, so we knew we wouldn't do a ton of sightseeing or anything, but it just wasn't that much fun to be there during the day. Crossing the street was a very terrifying activity, but I'm sure there's much more of that headed our way. It also just seems like a very manly city. You would see women sort of walking around sometimes, but if you stopped for a coffee (or definitely a drink), there were none around. Well, except for the ones for hire. Finally, it was just absolutely filthy. Not particularly polluted, but just very littered, grimy, dead cats in the middle of the sidewalk.... Yann agreed that it was the filthiest city he'd been to, but next on the list is Cairo, so I'm sure the rankings will change quickly!

(note that the kid is napping, not dead) 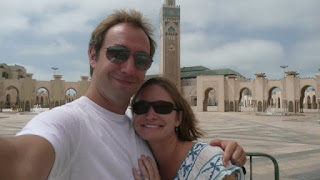 Posted by Catherine at 3:55 PM