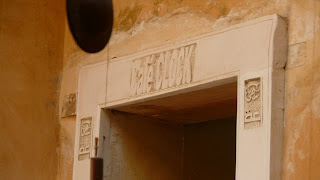 Long before we arrived in Morocco, Catherine had stumbled upon a web-site outlining a culinary tour of Moroccan cooking that was based in Fez. You spent a week with at a cooking school and spent your days between the kitchen and touring the local souqs, vineyards, olive plantations, etc. As she was describing this to me I became increasingly interested and excited and finally asked if she would be up for giving it a try. As it turned out, the next week long course would not take place until September which did not fit into our travel schedule. The upside was that the cooking school offered classes throughout the week on a regular basis and we could sign up once we made it to Fez.

We decided on two days of cooking class; one day as part of a group class and a second day in a private class with dedicated instruction. Fortunately the cooking school was located at a restaurant in the medina which we had already visited and which was not too far from our inn--no need to get lost! Arriving at 9:15am Monday morning, we were warmly greeted by the very outgoing Mike who was a British expat running the multi-faceted Cafe Clock. After a quick chat with Mike, we were served tea and introduced to our instructors for the day. The other couple who were supposed to comprise the rest of the group had backed out due to illness so we were going to two days of private instruction, what luck! 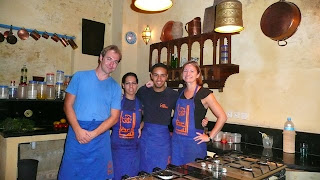 Our young instructors, whose names escape me at the moment (sorry guys), set us down and went over a menu of items for us to pick from and determine what we would be cooking that day. Catherine chose to make a Zaalouk Salad (marinated eggplant), vegetable couscous with lamb, and a coconut macaroon for desert. I selected the traditional Moroccan soup, Harira, a chicken tagine with cured lemon and olives, and a "special" undisclosed desert which the female chef said she had just learned. 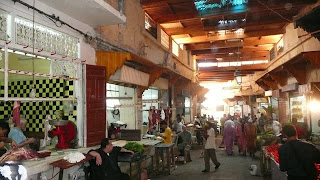 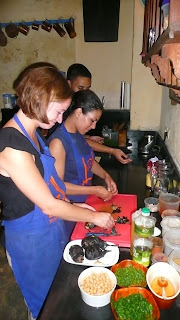 Our instructors spent the next hour walking us around the medina's food market explaining each of the vendors products, traditional cooking ingredients, and purchasing many of the items we would need for our dishes. Morbid as it may sound, I was most impressed by our visit with the chicken vendor who with expert skill grabbed a chicken from the floor, weighed it, pulled back its wings, said a prayer, then slit its throat. After a minute of letting the blood drain he doused the entire animal in boiling water, plucked its feathers, disemboweled it, and had it placed in a bag for us to carry away--talk about fresh meat! 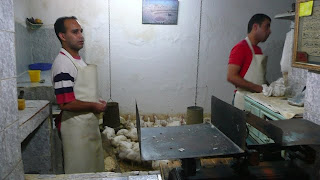 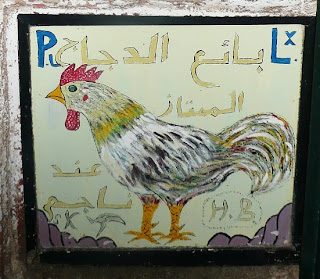 Back in the kitchen we watched (occasionally chopping and stirring) as our instructors prepared all our our dishes including a green called Bkoula which I had inquired about in the market. By 2pm we were ready to eat and proceeded to absolutely stuff ourselves filling tasting the 7 dishes we had prepared that morning. We skipped dinner that night instead opting for a glass of wine and a book in bed.

Day two started similarly chatting with Mike and enjoying some mint tea. He informed us that we were in for a treat because our instructor was going to be Cafe Clock's head chef Souad. Souad was a lovely lady who wore a constant smile and beamed with life. We greeted one another and sat down to discuss our game plan for the day. Catherine and I had discussed it the night before with Dar Roumana's assistant manager Gail (whom also extremely helpful and actually worked regularly with Cafe Clock) and had decided that we wanted to learn how to make Moroccan breads, pastries, and spicing. Initially our desire had been to learn how to hand roll couscous, but we were talked out of this due to the laborious process and time that it would take--nearly impossible for a one day class. After our discussion and another short walk through the medina we had decided with Souad to focus our efforts on making traditional Moroccan table bread, a spicy onion bread, savory pastilla (pastry stuffed with chicken), and sweet almond pastries. 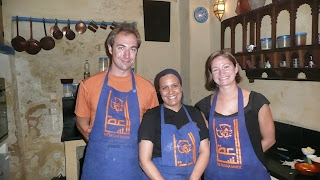 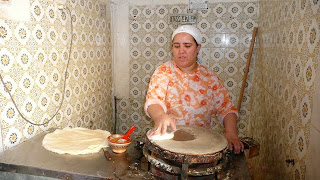 We cooked all morning and Souad did a wonderful job entertaining us with stories of Moroccan culture and also ensuring that we were being very hands-on in the kitchen. We labored through the morning hot with perspiration but cheerily chatting away as we kneeded dough, rolled pastries, and prepared our savory chicken stuffing. Our breads turned out to be delicious and the pastilla was the best I have had--success! 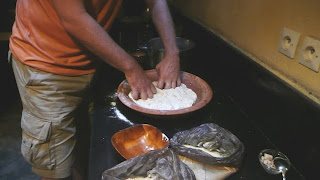 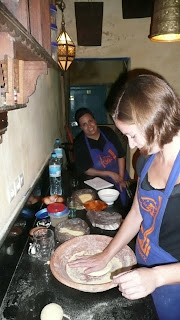 As of today, Catherine and I are confident that we will be able to prepare a traditional Moroccan feast for friends and family when we get home--that is, if we can still remember it in a year! Luckily, Catherine is trascribing all of our notes, I took a ton of pictures, and enough of our schooling will reside in memory to share these tastes with you at a later date. 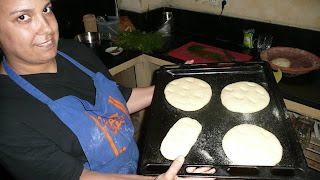