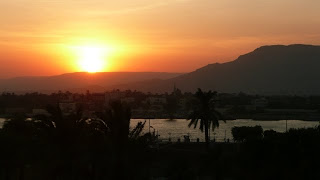 I have to start this entry giving major kudos to the guys as Nefertiti Hotel in Luxor (I suppose I'd do them better to write a review on tripadvisor). Their hotel is neat and clean with surprisingly spacious rooms at only $17/night. The internet is free, the laundry inexpensive (oh how I've learned to appreciate clean laundry), the food in their restaurant delicious (best falafel ever), and the view of the Nile (and the sunset) from their rooftop terrace spectacular. More than anything, the staff there are super-friendly and helpful.

We hadn't been able to decide what we were going to do regarding the beach in Egypt, but we knew we wanted to go for about a week. Closest was Hurghada, which is on the east coast of the mainland on the Red Sea and SW of Sharm el-Sheikh. Sharm el-Sheikh itself is at the tip of the Sinai Peninsula and the diving is supposed to amazing. However, it was supposed to be very expensive. About 80 km north of Sharm on the Gulf of Aqaba and directly west of Saudi Arabia is Dahab which was supposed to have great diving as well, but also supposed to be more laid back.

Our tentative plan was to take the bus to Hurghada (about 5 hours), spend a day or two there, ferry over to Sharm, spend as much time as we wanted there and maybe go to Dahab if the mood struck us. Regardless, we had a flight to Istanbul leaving Sharm on July 31.

As we were about to go to the bus station to buy our tickets, we happened to mention this plan to one of the guys at the hotel and we found out that the ferry to Sharm wouldn't be operational for the next two weeks! However, he offered to see about getting us a flight to Sharm (the bus would be 15-18 hours) and then arranging transportation to Dahab. He highly recommended hightailing it to Dahab immediately. We discussed a couple of alternative plans, but finally decided to go with his proposal. He also recommended and booked a hotel for us. It later turned out to be his cousin's place, but, whatever, best when everyone wins.... We figured if we didn't like Dahab, we could always return to Sharm since we were flying out of there anyway.

Anyway, on Friday night, everything went perfectly. A driver picked us up at the Nefertiti Hotel and we caught our flight out of Luxor at 10:30 without incident. A driver picked us in Sharm and delivered us to Shams in Dahab by about 12:30. The room was nice, clean, surprisingly large, and about 50 m from the beach. Score! 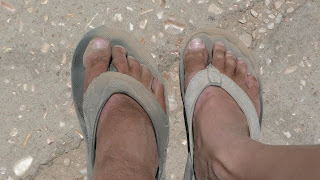 Posted by Catherine at 5:49 AM