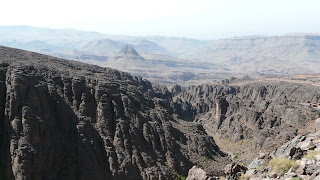 The next day we left early for Zagora. Even though it was only 200 km away, Brahim told us it would take about seven hours. Huh? It turned out that we were off-road for most of the drive through the Draa Valley. It was a pretty uncomfortable ride, but REALLY beautiful. 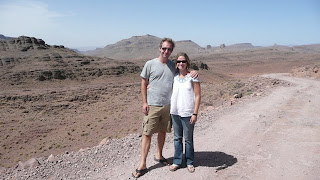 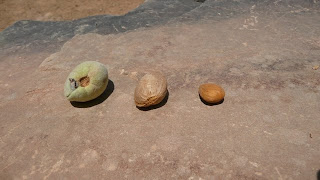 At one point along the way, we passed a man and his son picking almonds. He and Brahim conversed for a couple of minutes and then he handed us each a heaping handful of almonds. I asked Brahim if he knew him and he said, no, they just spoke the same Berber dialect and the guy was being friendly. After about thirty more minutes, Brahim stopped the car, picked up a small rock, and started cracking almonds. Tasty road snack! 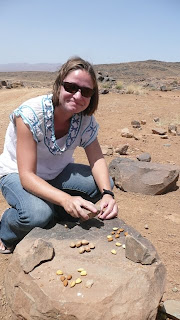 By about mid-afternoon, we made it to Zagora and were very excited for a dip in the pool--it was hot! A couple of hours later, we headed over to Tamegroute to meet a local guide, Abdou, who led us through the kasbah, over to the library, which held handwritten texts dating back to the fifth century (some were even written on gazelle skin), and then to the local pottery shop. Yann was pretty excited to see it and said that, despite the fact that the kiln is woodfired, etc. the process is nearly identical to modern processes. [We also thought it was pretty funny that our young guide shyly told us a dirty joke: What is the difference between a woman and a camel? You ride camels in the desert, you ride women everywhere else.] 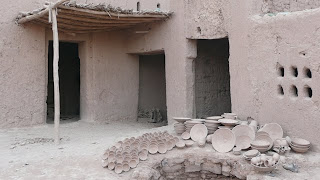 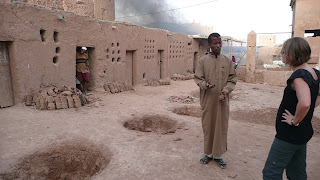 We'd been talking about how since we were spending all of this time among the Berbers, if ever we wanted to buy a Berber rug, wouldn't it be appropriate to do so from the source? So we told Brahim that we'd just like to take a look to see about prices and we'd probably try to buy something in a few days. He took us to the shop across from our hotel where the owner showed us around and finally took us into the rug room so he could ply us with sweet mint tea and hock his wares. Our dining room requires an odd-shaped rug (long and narrow, just like our house), so we didn't expect to find anything. However, after he showed us a few examples and we decided we liked the Tuareg (silk and goat hair) style best, he pulled out what we hope is a perfect fit (I had Yann lay down on it to approximate the dimensions). Coupled that with a gift for someone back home and the negotiating began. I stayed away from that...I am TERRIBLE at bargaining. Yann did a great job though. They settled on just over half of the original offer and probably about a 70-80% discount over what they'd sell for back home. Sweet souvenir!
Posted by Catherine at 8:43 AM