Marrakech (and its impish children) 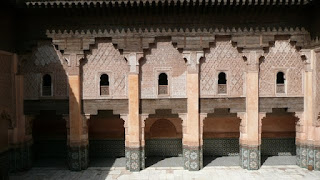 We walked off of the train in Marrakech in high spirits after getting more sleep that we had anticipated and knowing that our hotel would have someone picking us up at the train station. Awesome, no haggling with taxi drivers, just a quick ride to the hotel for a hot shower and some breakfast. The adventure gods would have none of this and sure enough, there was no one waiting to pick us up at the station. We walked around for about a half hour looking for someone and trying to figure out how to use a local pay phone (apparently requires its own type of card) until we finally decided that a taxi was our best option. We walked fearlessly into a crowd of cabbies in search of fare and chose the first guy we ran into. Showing him the name of our hotel he quickly smiled and said 50 dirham for the fare. I intuitively wanted to counter with 20 dirham until I received a most serious look informing me that we would not be haggling over a couple of dollars and further prolong the much needed shower. Fair enough, we loaded up and were off. We swerved through Marrakech and entered what we would later find out was the medina. Our cabbie eventually pulled over talked to a couple of guys on the street then pointed his finger out the window and told us the hotel was just up the hill but we would have to walk—-I snickered covering up how uncomfortable I was and told the guy no way, we paid him to drop us at the hotel. This might sound a little insensitive and whiney on our parts, but if you had never seen the medina and were randomly dropped off there you would have thought someone was trying to get rid of you! As we would come to find out, this is completely not the case; however, we were sticking to our guns and told him to take us back to the train station. He insisted that we were near the hotel, but also was acting extremely lost just judging by the number of people he was hailing on the street. We finally resolved the issue by paying him to call the hotel and get better directions. 15 minutes later we pulled up outside of a wall with our hotel’s name written on it—-halleluja! Of course the cabbie wanted extra money because we had given him a hotel that had two addresses (WTF?!) I gave him half just to be done with that awful trip. 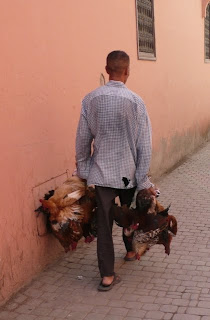 Safely in our hotel, we sipped on coffee and tea trying to calm our nerves and get our spirits back in order before our first big day in Marrakech. Feeling better after our showers we went to see the inn keeper and obtain a map that would help us located some breakfast. We were given two maps and some verbal instructions about how to find the “big” square which lay at the heart of the medina. We could not figure out the verbal instructions, but blamed the language barrier and decided to rely upon our map—-whatever, we were almost pros after dealing with the medina in Tanger. Wrong, wrong, wrong! It did not help that the local kids’ favorite game is to give tourists bad directions and watch them walk around aimlessly. Seriously, it seemed like every street we turned down we would be given two different sets of instructions from different people. I won’t lie, after the morning we had had and not having eaten since the previous day around 6:30pm we were both feeling extremely frustrated and helpless. We finally broke down and paid someone to help us find the big square which also proved to be a relatively futile exercise. But after nearly two hours of walking in circles and feeling more lost that perhaps either of us have ever felt in our entire lives we finally stumbled upon the square which lay less than 2km from our hotel. We promptly found a tourist restaurant and devoured some lunch regrouping for a second time that day. The bad news was our first morning in Marrakech absolutely sucked, the good news is that it improved rapidly for the remainder of our stay—-we simply needed to get oriented. 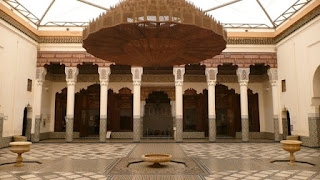 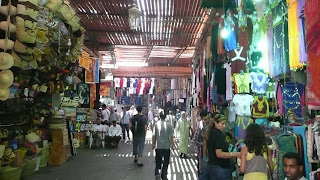 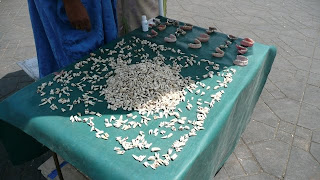 I have never seen anything in my life like this place and it is truly wonderful [after you take a deep breath, get over feeling uncomfortable, and quit saying “whoa” in your head]. Bellies full and nerves calmed we dove in head first and went immediately to find a snake charmer. It didn’t take long before we were deep in the throws of being hustled and complemented. 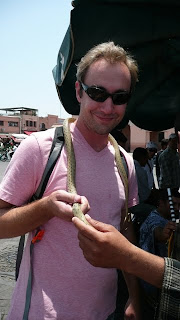 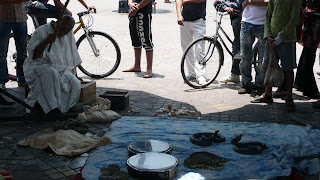 We were adorned with snakes, had snakes rubbed on awkward body parts accompanying a series of blessings, and finally treated to a brief musical interlude as two black cobras moved around a bit and attempted to strike at their handlers. Sad, but I saw no “dancing” snakes. We made our contribution to the snake gang and moved along to an orange juice slinger and had a glass of the fresh squeezed nectar—-cheap and delicious. Next we moved on to the very creepy tooth-dude table who sold individual human teeth and random dentures. We could only assume his inventory was created by people who no longer required these items and with that I’ll let your imagination run free. Of course, it was too creepy not to photograph so we paid a few dirham and were grumpily allowed to take a picture. Content we had done our duty to the square we headed into the souqs on the hunt for a head scarf to help protect Catherine’s head during our upcoming camel ride through the desert. 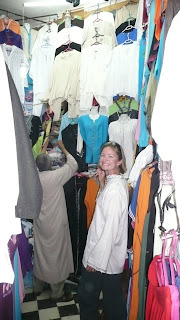 We had a blast wandering through the medina and looking at the souqs. Imagine walking through narrow cobbled streets that are hundreds of years old, built of clay, and are completely lined with shops all selling the local craft. Sunlight beamed in through the rough thatching that covered the walks and I realized I was starting to have fun. We wrapped up our long hot day of wandering the medina at one of Lonely Planet’s picks for a cocktail—-hello oasis! 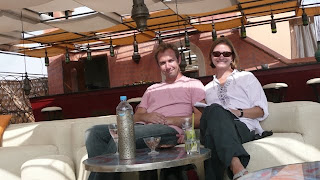 Café Arabe is one of the few places where you can get a drink (that is if you wanted your wife to be able to join you) and man did it hit the spot. Three flights up you are sitting on a terrace covered with modern furniture, being misted with water from above, enjoying a cold beer/glass of wine, and watching the sun set over the roofs of the medina.
Back to the hotel we got cleaned up and set out to test our newly acquired skill of navigating the tiny cobbled medina streets at night. Dinner was upscale traditional Moroccan and delicious. Our table was nestled back off of a small alley and sitting in a completely modernized courtyard. The meal was a scrumptious tagine of chicken with olives and cured lemons along with a vegetable couscous-—yum.
We slept in a little bit the next day, took breakfast at our riad (hotel), and then set out to find the Jardin Majorelle in the Ville Nouvelle. These gardens were a gift to the city of Marrakech from the famous fashion designer Yves Saint Laurent. Apparently he and his partner purchased the gardens/villa from the owner in the 1960’s with the hope of retaining its original vision to provide a garden oasis in the large city. It was impressive and I got a little overly excited taking pictures of weird cacti and succulents that made even the exotic fauna of the southwest US look tame. 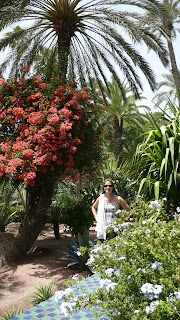 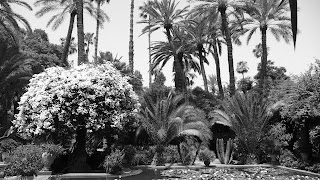 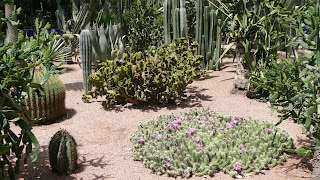 Next stop on our day of exploring the new village were a couple of art galleries closer to the town center. After a quick lunch we found both galleries which were quite small but full of interesting art. Most exciting was a high end interior design studio which exhibited a single artist’s (Yahya) work. The lanterns and wall hangings were absolutely amazing and still the most impressive thing I’ve seen thus far in terms of Moroccan art. If I ever have the chance to buy really expensive fixtures for a building/lobby/hotel/whatever, I will definitely consider flying back to pick up some of this stuff. www.yahyacreation.com

Our appointment to meet the desert tour guides was later that evening at the riad and so we walked back late that afternoon and took care of some blogging, emails, and other internet chores. Brahim and Mbarek were early for the appointment which was great for us because we were hungry and ready for dinner. Both gentlemen were very nice and informed us that we did not need any special clothing or gear for the trip. They also helped us rearrange our trip so that we would end in Fez which was our next stop for cooking school. We paid for our trip, sighed at the relief of handing over the wad of cash we had been carrying, shook hands, and agreed to meet the following morning at 9am.

It was only appropriate to end our stay in Marrakech by getting lost in the medina one last time. Overly confident in our navigational skills, we set out to find a restaurant in an unfamiliar area of the medina. After about a half hour and one to many long dark alleys we finally reached our destination—closed. We abandoned the thought of trying to find yet another new restaurant and headed back to the previously located Café Arabe. We enjoyed a delicious meal rocking out to good ole American alternative rock and watching poor Ghana fall at the hands of Uruguay in Johannesburg. 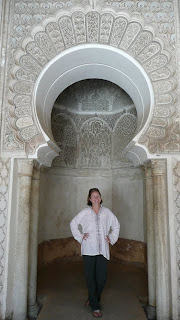