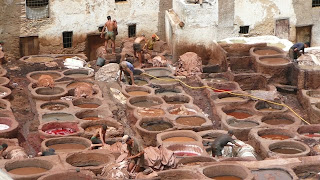 We didn’t do a ton of touring around in Fez—mainly because there isn’t a whole lot to see outside of the hustle and bustle of the city itself. There are a few small museums and a beautiful large mosque closed to non-Muslims. After the rug purchases in Zagora, we thought that it might be fun to ship a box home with some Moroccan items for the home (ours and anyone else we wanted to give a gift).

Fez is known for its leather handicrafts and one thing that Yann really wanted to do was see the tannery in action. The big site, the Chouwara tanneries, is in the NE part of the city. You can’t actually get into the pits themselves, but all of the shops surrounding have balconies offering views of the action.

Along the way, we passed Place as-Seffarine—the brass-working square. The artisans in the surrounding shops work mainly in brass, but also other metals, and there were amazingly beautiful pots, basins, trays—if only we could ship the entire city home! Typically, I am not a shopper, but once I realized how inexpensively we could score some really cool stuff for our house….well, I guess I am a girl after all. 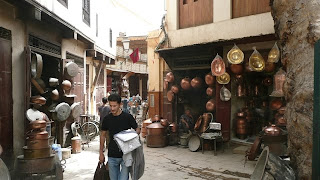 As we left the symphony of the pinging metal hammers, we tried to reorient ourselves towards the tannery. As usual, we felt turned around and lost in the medina. A guy about our age, Mohammed, produced a card of one of the shops overlooking the pits and offered to show us the way. Okay fine, we’d pay him a few dirhams to reach our destination. He led us through the winding streets and asked us about our stay so far in Morocco. It turned out he was from Merzouga—his father is Arabic and his mother Berber. What a coincidence—it seems like everyone we run into is from *exactly* where we’ve just visited! ;) 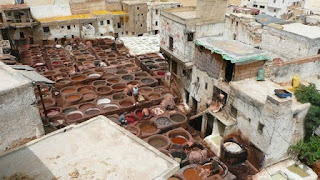 Upon arrival, he handed us each a bunch of mint (for the smell) and led us upstairs to the balcony. The pits were pretty spectacular: huge pits for bleaching and dying. Supposedly, all dyes are natural and all of the good leather is from animals that you also eat: camel, goat, sheep….bad leather is from donkeys.

Once he was done explaining the processing methods, he led us downstairs to where men were making (by hand, naturally) sandals, cushions, and bags. And then, on to the “showroom” where we were given the sales pitch!

We’d already decided we wanted to ship home a leather cushion or two. They are really cool—sort of smaller, classier versions of the beanbag chair and all handmade. Even if we don’t move back to our house in Baltimore, we thought those would be versatile enough to follow us anywhere. Plus, they’re pretty light and roll up well (they come unstuffed—you get to fill them with old clothes yourself).

Once we’d decided what we wanted, I left Yann and Mohammed to the bargaining. I’m starting to get less weirded out by the process and it’s actually pretty funny and good-natured. Mohammed kept calling Yann a Berber (which I think meant “cheap bastard”) and they finally agreed on a price. After everything was paid for and packed up, we were on our way. The shop owner or manager (he seemed to be the one in charge) tried to talk us into buying something else, but Yann motioned towards his full bag and the guy quickly let up with a shrug and a smile, like, well, it was worth a try….

An added bonus of full bags as you walk back through the medina is that everyone sees that you’ve already done your shopping and they don’t try to drag you into their store. :) 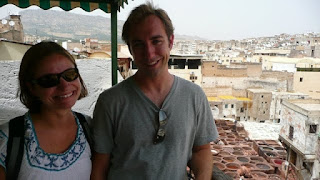 Posted by Catherine at 7:36 AM