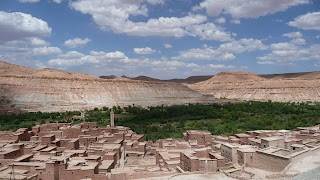 Before Yann and I started our trip, Ginny had emailed me about some things that her sister had done in Morocco over her honeymoon last year. (Sarah, if you are reading this, thank you very much!) One of them was hiring a driver to explore some of central Morocco. I went to the driver’s site and they had a few example tours—one of them was seven days exploring deserts and kasbahs and included one night out in the desert in a berber tent. Cool! I emailed the guy who sent us back a proposed all-inclusive trip and price. It seemed to fit the bill perfectly, so I called him to confirm in Sagres. He assured me that our driver would speak French and English and that we could pay him in cash (in euros) once we got to Marrakesh. 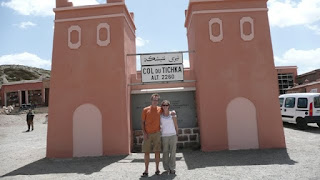 We met Brahim and Mbarek at our hotel in Marrakesh last Friday night. Brahim is usually the driver and Mbarek does most of the office/internet work. Brahim definitely speaks very little English and, as such, Mbarek was going to come along with us on the trek. However, during the five minutes that we spoke to them that night, it became pretty obvious that most of the information exchange was going to be in franglais between Mbarek and myself. I’m not sure I’m going to be able to keep up with the number of trip lessons, but definitely something we’ll keep in mind from now on is that we should confirm language expectations in the future.

Despite the language differences, we were still pumped for the trip, so we handed over the cash. That was too many euros to have been carrying around and we were VERY happy to get rid of them. Another lesson: try to arrange payment in local currency! 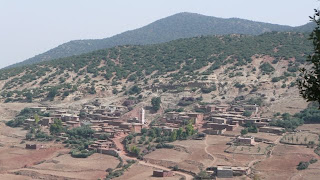 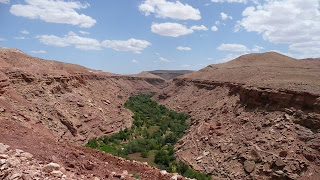 However, for a nominal fee, they agreed to end our trip in Fez instead of Marrakesh, so that would save us a very long train ride afterwards.

The next morning after breakfast, Brahim and Mbarek met us promptly at 9:00 and led us out to the Land Rover that would be our chariot for the next seven days. We started out east towards the Atlas Mountains. It was really beautiful and we made a quick stop at the highest point of the Tizi n Tichka pass. 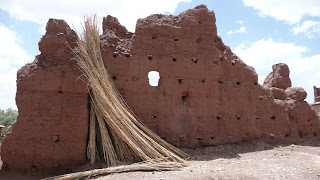 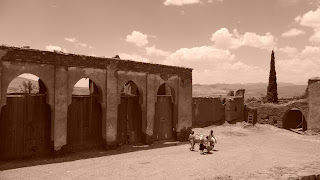 Next, we were off to the Glaoui Kasbah in Telouet. It turned out that it had been neglected for many years and was currently under reconstruction, so we didn’t get to walk around too much. I can’t remember where we stopped for lunch after that, but we had the most wonderful meal. It was a chicken tagine with walnuts and figs. 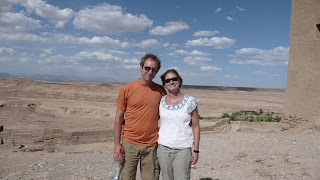 Then it was on to Ait benhaddou Kasbah where many films have been shot: Lawrence of Arabia, Jewel of the Nile, Indiana Jones and the Last Crusade, Gladiator, and about a million others. A local guide, Jamal, led us up to the top, where we had a beautiful view of the village below and another few smaller villages off in the distance. 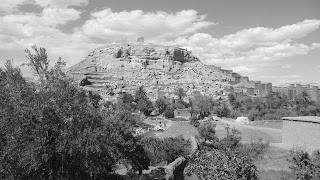 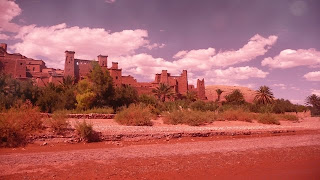 Brahim and Mbarek then took us into Ouarzazate where we would spend the night in a hotel. Along the way, they explained that the city of 80,000 is the Hollywood of Morocco and we took a few pictures outside of the studios.

We passed some very nice looking hotels and were looking forward to a nice evening and dinner. We finally pulled up outside of Hotel la Vallee and were more than a little disappointed. I’m still not sure that our sheets had been washed. Lesson #597: when purchasing an all-inclusive tour, confirm where you are staying and eating before you buy. 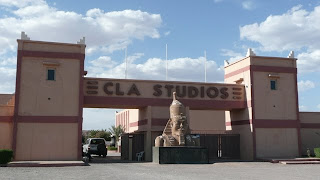 Yann changed into his swimsuit for a quick dip, but I still haven’t figured out how to dress in Islamic countries and didn’t feel comfortable hanging out in my bikini where there were no other women. So I settled for quickly checking my email.

Dinner was edible, but definitely left us with the impression of having been fed and watered, but little else. We hoped that our accommodations and meals would improve as the trip wore on….but, if not; we were definitely learning some lessons. As we went to sleep, I tried not to think about dirty sheets and bed bugs!
Posted by Catherine at 5:44 PM