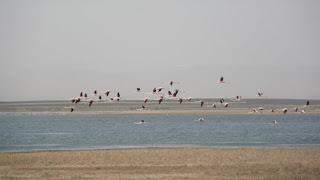 The next day was really cool, but I felt a lot of Western, voyeuristic guilt. We went for a really awesome 4x4 drive through the dunes. I know Yann was bummed that he didn't get to do any of the driving! (Seemed like driving in the snow to me...not fun!) We also stopped by the lake (which was very low since we're basically in the height of summer) and saw some real live flamingos. Maybe that's not that big of a deal, but I think flamingos outside of a zoo are pretty exotic. Brahim leaned on the horn to make the flock take off--pretty impressive.

Brahim randomly stopped at a well--were we getting water? Nope! He filled a trough and we watched the camels close in. I'm pretty skittish around wild animals, but it was pretty obvious that they are even more so. It was cool being so close to about twenty at once. 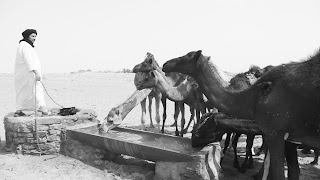 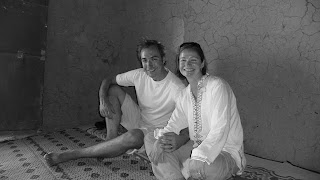 Then we stopped in for tea with a Berber family. It was really really interesting to see their home: the husband, wife, sister (that's a guess), and two sons (one about ten who was on his bike the whole time and one about three who was just adorable). They had quite a few goats running around and a few of them were babies--my favorite! The home was very simple with three or four rooms made of mud, but a lot nicer than a lot of the tents/shacks that we'd seen from the road. But I felt kind of terrible. The women were working (baking bread...the oven was fueled with camel dung...pretty neat) and basically out of sight. We chilled in another room with the father and the youngest son having tea. I'm not sure if I felt most guilty because I don't live in the desert without electricity or running water or if it was because I don't live only to work in the home and serve my husband or it was because I feel so lucky to have been born where I was or if it was because I may be simplifying something that I don't fully understand. Regardless, I think that's all I'll say for now. There'll probably be a post similar to my women's clothing post sometime soon where you can feel free to call me a Western, elitist ahole. :) I'll just sum it up with the fact that I feel fortunate that we had the opportunity to peek into a very different lifestyle.

Then we got to see the music of the Gnawa tribe (former slaves to the sultan of Marrakesh at the end of the seventeenth century). Again, I felt a little bit like a voyeur, but their performance was spectacular. (we got their CD :) ) It involves percussion (drums and castanet-like hand thingies), string instruments, singing, and dancing. Supposedly, if you go to the Gnawa festival in June, the dancing gets really elaborate with backflips and the like. 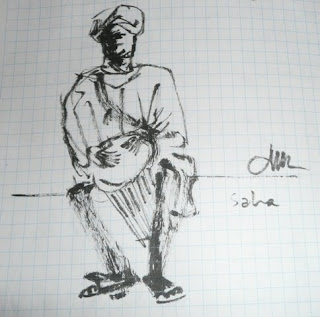 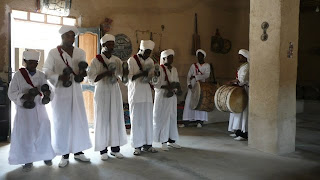 Afterwards, we went back to the hotel to chill by the pool for the hottest part of the day. I now understand why Moroccans are such mid-day nappers--the heat makes doing anything productive seem pretty impossible. Around 6:00, we headed over to another inn where we left our bags and met up with our camels. It turned out that we were headed into the dunes at Erg Chebbi with a group of seven Australian guys. They turned out to be a really fun (and hilarious) group of dudes. 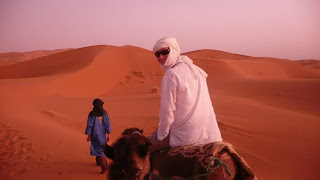 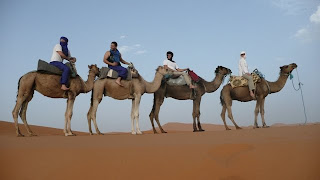 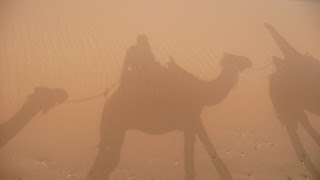 A sandstorm whipped through about five minutes after we arrived and I started to get nervous that the trip might be really uncomfortable. However, once it was gone, it was very still out (and stayed that way for the rest of the trip). We all got turbaned up in case more wind showed up. I don't mean to make fun of desert dress, but Yann and I looked pretty funny. The turban is a fully functional article of clothing, however! 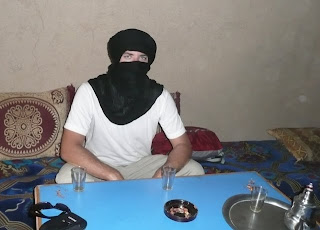 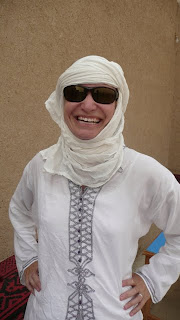 It sounds pretty cheesy: camel ride through the dunes to spend the night in a Berber camp under the stars. It was really amazing though. I still hadn't gotten over the otherworldliness of the dunes and I almost felt like our camel caravan looked like it had been photo-shopped into the background. The camels were funny....mostly pretty chill, but they seemed to have their moments of crankiness. And the guys complained incessantly about how uncomfortable the saddles were: this is one time that it was really good to be a girl! It was remarkably (relatively) cool as well...we lucked out with a cloudy sky.

We got to the camp around sunset after about a two-hour ride. Dinner was a delicious chicken and vegetable tagine. The Aussies turned out to be a really fun group of guys. They get together every four years and do some sort of trip centered around the World Cup. This time, they'd started out in Tanzania to climb Mt. Kilimanjaro, went to South Africa for some soccer, and had been in Morocco for a few days. Afterwards, they were headed to Fez, then Casablanca, then Cairo--incidentally, just like us...we'd be about a week behind them. 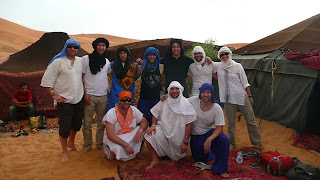 After that, the stars were really starting to come out. It was amazing...I've never seen so many. Yann's photos didn't really come out, but I don't think there's any way to capture the sheer magnitude of this sight anyway. We all slept out in the open and I think it finally cooled off around 3:00 AM. We woke up around 5:30 and decided to climb up on one of the dunes for the sunrise. It was really steep and we only made it up about 2/3, but that was good enough--gorgeous! 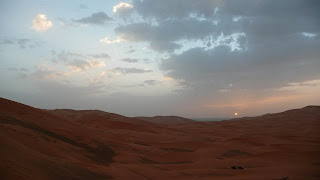 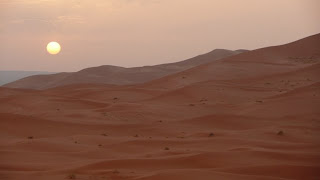 We ate breakfast and got going quickly--our guides told us if we waited it would be sweltering and we believed them!
Posted by Catherine at 8:44 AM