When we left Sagres on Monday morning, the plan was relatively simple: drop the car off at the airport in Faro, catch our bus to Algeciras, Spain, take the ferry to Tangier, Morocco on Tuesday, and take the train to Marrakesh on Wednesday. It would be a long couple of days of travel, but no big deal.

After dropping the car off, we caught a city bus to the bus station. Yann had booked our tickets online at about 40 euro apiece and we were all set to leave Faro at 1:15 and arrive in Algeciras at 8:15. We walked up to the ticket booth to check that we were in the right place and it turned out we'd missed our bus that had departed at 1:15 *that morning*. Lesson #1: remember the 24-hour clock. Since we'd booked our tickets online and had a connecting bus in Seville, Spain, our itinerary involved two different bus lines in two different countries. As such, only recourse was to wait an extra day to follow our same itinerary. Lesson #2: stop booking things online.

We really wanted to get on our way, so we paid the 16 euros each to get to Seville that night. The bus wasn't bad, but it was a 4-hour trip and there was no bathroom on board. Once we got to Seville, we reserved an early morning bus for the next day and even managed to have them credit the original ticket. Luckily, we found a nice, inexpensive hotel and had a lovely dinner of Spanish tapas and red wine. Despite our newfound love of Portuguese wines...the Spanish ones may still be better.

The bus ride the next morning was relatively uneventful (but, again, a 3-1/2 hour ride without a bathroom...I'm not sure how older people survive! We were prepared this time and barely drank any liquids before we left) and we were dropped off right at the port in Algeciras. Ferries to Tangier ran about every half hour through four or five different operators, so we reserved two spots and grabbed a quick breakfast. 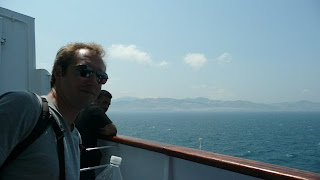 The ferry ride was also uneventful, but symbolically pretty exciting. We saw the rock of Gibraltar off in the distance and just the act of crossing through the Strait of Gibraltar felt pretty cool. There were two firsts for both of us: first trip to Africa and first trip to an Islamic country. When we arrived in Tangier, there was a *ton* of security. Since we had no expectations, we just figured that's how it was. We already knew our ferry operator was going to shuttle us into town, so we went to find our bus. After waiting outside for a few minutes, we were shooed inside: our bus was delayed and they weren't sure when it was coming. Um...okay?

At this point, we realized that, in addition to all of the security inside, there were *swarms* of people outside, waiting for something. I finally summoned the courage to use my terrible French to ask one of the official looking guys what was going on. Turned out the king was on his way in. Random! In retrospect, security seemed a little light! 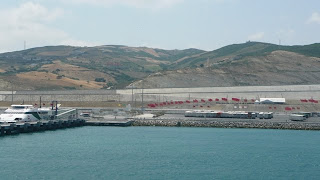 Mohammed VI walked through the ferry terminal with a pretty big entourage and did a bit of waving. Within about three minutes, he was gone. Afterwards, a guy standing near us asked if we'd expected such a thing and we said no. We were informed that *everyone* in Morocco loves him. I looked him up in the trusty Lonely Planet and it looks like he has been in power since 1999 and has made a lot of positive changes for the country.

A young Spanish couple was nice enough to tell us when the bus arrived about ten minutes later. [Note: if you ever decide to take the ferry from Spain to Morocco, take the line from Tarifa to Tangier and not from Algeciras to Tangier Med. The latter, which was the line we took, is actually about 50+ km from Tangier.] 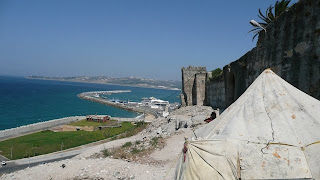 We'd read that the sleeper cars on the overnight train from Tangier to Marrakesh sometimes get fully booked and it's best to book a day ahead of time. However, you can't book them until you get to Morocco. So our plan was to go to the train station, get our tickets for the next night, and spend the night in Tangier. 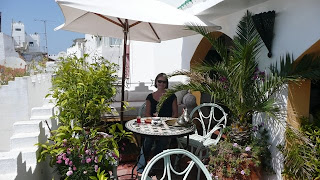 As soon as we arrived in downtown Tangier, relative chaos ensued. This isn't actually true, but I've never been to Morocco and it was very different for me. We finally got into a taxi with a French- and English-speaking sidekick, Nourddine. I booked our sleeper car for the next night and we had them drop us off at a hotel. We also agreed to have Nourddine meet us in an hour to show us around the medina.

[Thank you to all of my French teachers in the past...even though my French is god-awful, I do not know what we would do without it here.] 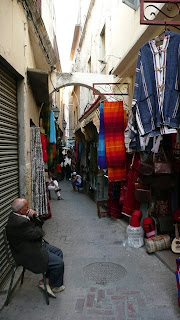 Unfortunately, that hotel was booked as was the next one on our list. I'm sure I'll get used to it, but I *hate* being hustled. The streets in the medina wind around and aren't necessarily marked. Some local guys saw us wandering around obviously lost and confused and led us to another hotel. It turned out to be completely legit, but we were definitely wary. And definitely overpaid....oh well...live and learn. 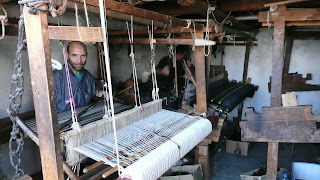 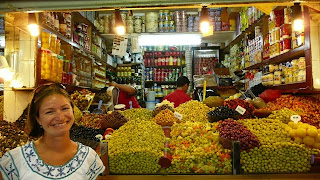 We met Nourddine back at the other hotel and he turned out to be a great resource. His tour lasted about three hours and he led us all over the medina, through the markets (produce, clothing, meat entrails....we saw it all), and around the outskirts. If nothing else, it was a fantastic ten dollars spent on an orientation to the area. Plus, he was nice and funny and cool. He also pointed out some things to visit the next day before our train left. 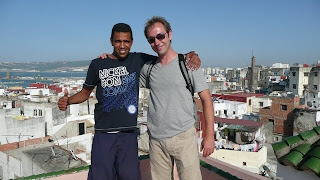 The next morning, we checked out of our hotel (which was actually very nice and had a wonderful breakfast--Dar Sultan) and spent the day wandering around the city. We checked out the Kasbah Museum and the American Legation Museum (who knew that Morocco was the first country to recognize the fledgling United States and let us build an embassy?) Finally, it was about time to head to the train station. 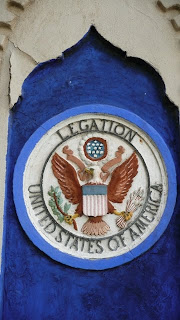 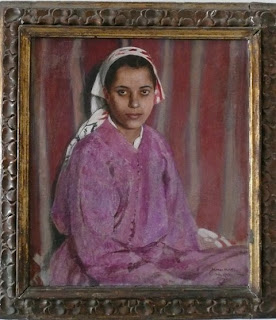 Our train left at 9:00 PM and arrived in Marrakesh at 8:00 AM. In each sleeper compartment, there were four bunks. As our train pulled away, we were still the only ones in our compartment. As we were celebrating our good luck, a 50ish-year-old woman and her daughter opened the door. Oh well, no big deal. We all settled in to go to sleep for the long ride ahead of us. Aside from the daughter's post-midnight cell phone call and her mother's horrible flatulence that lasted through the night, our first overnight train trip was a success! 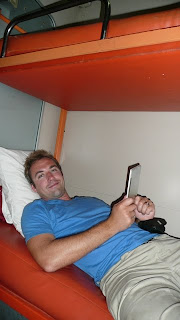 Posted by Catherine at 3:39 AM