We started our trip to Cappadocia with an overnight bus ride from Fethiye after our boat cruise. We’d tried to figure out an affordable way to fly, but it just wasn’t possible. Plus, we’ve been pretty spoiled on this trip—aside from two five-hour bus rides, all of our travel has been by train, plane, and either rental or *chauffeured* car. We figured we could deal with one overnight bus ride. And hopefully we’d start getting used to it. Anyway, we arrived in Avanos on Monday morning after 12-1/2 hours with little incident, but we were extremely tired. We spent the day listlessly exploring the small town known for its pottery, napping, and catching up on some internet stuff.

While we were in Dahab, Yann found a tour consisting of five days of hiking around Cappadocia, spending each night in a different inn. The travel agency was affiliated with our inn in Avanos and everyone was extremely nice and hospitable. When we showed up at 8:30 AM, they immediately sat us down to a lovely Turkish breakfast and our room was ready as soon as we were done eating. We got some laundry done on the fly and they made sure that we knew about their family-style dinner that night. We got most of our stuff taken care of in English, but, yet again, French came in very handy…I think we were the only non-French-speaking tourists there.

The inn itself was really cool and, we came to realize over the next few days, very similar to others in the area. It was made up of fourteen different buildings that were all remnants of ancient cave dwellings. The bathrooms had all been remodeled in March, however, so there were plenty of modern conveniences as well. Our room, Cec, had a huge vaulted ceiling…and tiny pieces crumbled off regularly. Every time we brushed off the bedspread, it would be covered again in crumbled stone within a few hours. 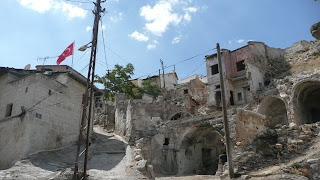 Dinner was fantastic and, similar to the food on the boat, had a very home-cooked feel to it. Spending so much time in restaurants, we’ve really come to appreciate the more homey meals we’ve come across. There was also live traditional Turkish music performed during and after dinner. Yann especially enjoyed the lap-harp-esque instrument, the kanun. Apparently, they have music every night at dinner. I’m sure it would get a little old if you heard it all the time, but it was a special treat for us.

Still pretty exhausted from the night before, we retired pretty early, just as the dancing started to pick up--yikes! Besides, our hike started the next morning.
Posted by Catherine at 8:32 AM