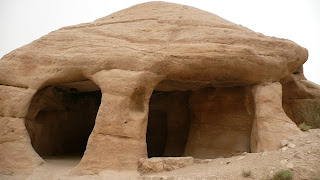 We'd initially planned to leave Dahab last Saturday to fly to Turkey. However, since we've been in Morocco and Egypt during the low season, we didn't account for the fact that the first two weeks of August are the peak of Turkey's high season. Anyway, the bottom line was that we couldn't reserve anything. And rather than sit in Istanbul (burning mega-bucks) for an extra week trying to figure things out, we decided to spend that extra time in Dahab.

Dahab is really beautiful and extremely chill, but we needed to have some additional activities to keep us entertained. On Saturday, we decided to take a day trip to Petra, Jordan. In retrospect, we probably should have extended the trip an extra day or two, but we were being cheapskates. However, we did get the highlights. 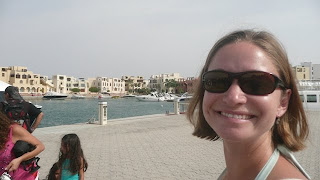 It was a long day of travel. We left Dahab at 5:00 AM in the hands of the world's most insane cab driver. We arrived at the port at Taba around 6:45 AM to catch the 7:30 AM ferry over to Aqaba, Jordan. There, we joined a group of about 20 American and Russian tourists to drive to Petra.

On our way out there, we passed Wadi Rum, where Lawrence of Arabia (and part of Star Wars and Transformers) was filmed. My main regret in only doing a day trip to Petra was that we didn't get to hike around Wadi Rum. It looked absolutely incredible from the road. We've also now added Lawrence of Arabia to the list of movies we need to see. After this trip, I think we're going to have to spend about two months in front of the television seeing all of these movies filmed at/inspired by places we've visited. Y'know, because the places themselves aren't cool enough. :) 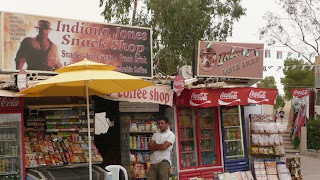 During the bus ride, we got the historical highlights. Aside from being the film site for Indiana Jones and the Last Crusade (again with the important part), it was the ancient capital city established by the Nabataeans around the 6th century BC. The two really cool parts about it were 1) they were able to control their water supply through dams, cisterns, etc. (so they could sustain long periods of drought and stick around for a long time) and 2) that's it's incredibly beautiful. 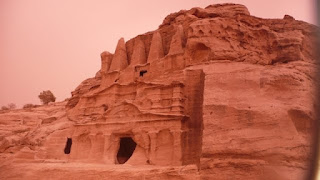 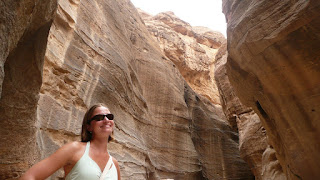 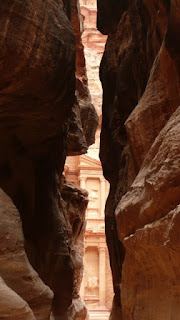 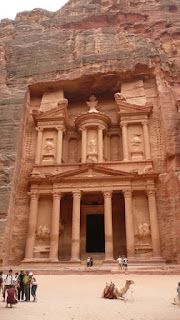 We only spent about three hours there, so we barely saw a fraction of the ruins. We entered through the narrow gorge leading into the valley and walked down about 2 or 3 km to the most elaborate ruin, the Treasury. Legend had it that a fortune is stored in the top (but it's only legend). We also walked a little further to the theater and climbed around a bit. 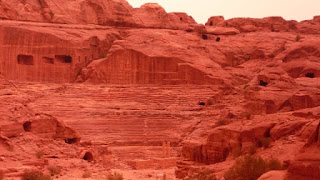 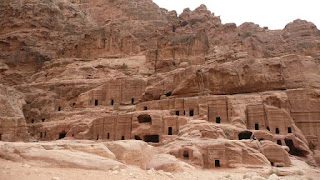 The ruins and simply the sandstone formations themselves were really beautiful. It was like all of the beautiful desert and rock formations I've seen in the American SW, but about 1000-fold. There were different colors in the different layers of the rock and tons of caves and windows dug out for ancient tombs. In modern times, until about 25 years ago, Jordanian Bedouins lived in this area, staking out caves and/or pitching tents. In the mid-80s, they were moved into housing with electricity, running water, etc. in an effort to "improve lifestyle", but also to preserve the ruins.

While we were climbing around the theater area, I saw someone in a Rice Football t-shirt who I'd seen earlier near the entrance. Like a good dorky Rice alum, I approached him. We exchanged the important stats, year and college (but not names until much later). John, it turned out, was about to start his senior year at Weiss and was a sociology major. He'd spent the summer studying in Israel and Syria and was now in Jordan for a few days' exploration. I wish I'd been as motivated as he was when I was an undergrad. He'd gotten Rice to pay for a lot of international travel for him over the last three years. Rhett, can you please be as motivated as he has been, so Yann and I can live vicariously through you? 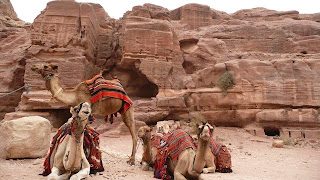 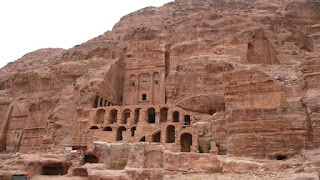 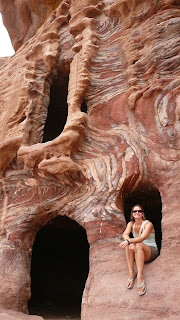 Around 3:30 PM, we stopped for a late lunch and then headed back to catch the 7:00 PM ferry from Aqaba. When we arrived in Taba, we met up with our same *insane* cab driver from the morning, who deposited us back in Dahab around 10:30 PM. Long day, but totally worth it.

** By the way, I picked up a really interesting book in one of the gift shops where we stopped: Married to a Bedouin. It is the memoir of a nurse from New Zealand who spent six months traveling around the Middle East with a friend. She met a Bedouin man in Petra, moved into his cave, and married him in 1978. She learned Arabic, converted to Islam, and had three children. She lived with him and their children in Petra until she was widowed in 2002. She now divides her time between Petra and Sydney. Alan, I'm sending this to you at some point when we send a box to MS. I'm sure I'll read it a few more times before then--it was a very good read, although I was bummed that it didn't talk much about the time after they left the cave in 1985. 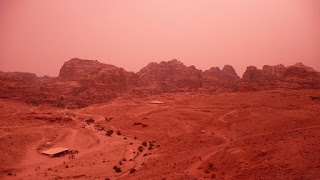 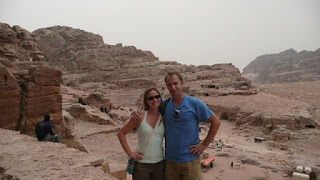 Posted by Catherine at 5:03 AM