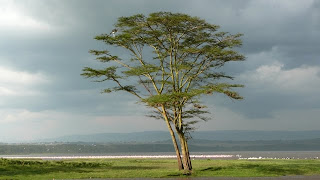 Early yesterday, Dickson picked us up from Noru Maro River Lodge so we could move on to Lake Nakuru, the site of the first half of our safari. Woohoo—wildlife, here we come!

After about two hours of driving on the world’s bumpiest unpaved road, we stopped at a coffee shop/souvenir stand that happened also to be on the equator. We watched a young guy pour water into a bowl with a hole cut out in the bottom. He demonstrated how ten meters north of the equator, water swirls out clockwise and ten meters south of the equator, water swirls out counter-clockwise. On the equator, it doesn’t swirl at all. (Neither Yann nor I can remember what this effect is called, but I remember learning about it in sixth grade…) Yann proceeded to buy a piece of paper “certifying” that we’d crossed the equator for about four bucks….I’m sure the cost to frame it will be a multiple of that. 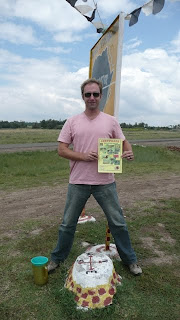 After another two hours, we arrived at Flamingo Hill Camp. I’ll immediately object to the use of the word “camp” to describe this place—it’s definitely not like any camp *we’d* ever been to! Upon arrival, we were served chilled, fresh-squeezed passion fruit juice in a glass with a flavored sugar rim. We were then shown to our “tent”. I think each tent is about the same: a heavy duty canvas tent on a concrete platform (with electricity), a large full (and fully plumbed) bathroom separated by a canvas door, and a stone veranda overlooking the plains. Each evening, they turned down our king size, canopied bed, put hot water bottles under the comforter, and let down the mosquito net. These may be our nicest accommodations yet! [Michele and Virgil, you can use this as inspiration to upgrade your already super swanky crawfish boil set-up.] 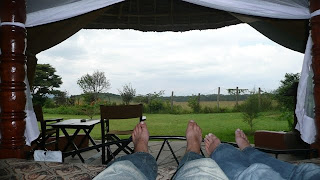 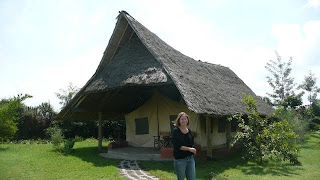 We settled in to enjoy a delicious lunch and chill out for an hour or so before Dickson retrieved us for our first game drive at 4:30. Around that time, the sky looked pretty menacing, so we grabbed our rain jackets. We entered Lake Nakuru National Park and immediately saw a big bunch of baboons. Dickson stopped so we could gawk and take pictures, but little did we know it was only the beginning!

Dickson had told us ahead of time that the main point of all safaris is to see the “big five”: water buffalo, rhinoceroses, lions, elephants, and leopards. This is leftover from the original big-game hunting safaris from back in the day—hunting safaris are now, of course, illegal. The main draw of Lake Nakuru was supposed to be flamingos, rhinos, and leopards, *if* you could find them. He said that in seven years of guiding safaris, he’d probably only seen ten leopards.

We drove over to the lake full of flamingos and pelicans and it started absolutely pouring. Great, we figured all of the animals would seek shelter and we wouldn’t see anything. That couldn’t have been further from the truth though—we saw a ton. After we left the flamingos, we saw herds of water buffalo. Then we saw a rhino! It was all alone, sort of far away, and not very visible in the grass. Yann took several photos, thinking it may be our only chance to see a rhino. It turned out to be a black rhino—they are very aggressive and travel solo. However, we caught back up to him later and managed to get some really great shots. And then after that, we saw a group of white rhinos—they are not very aggressive and travel together. 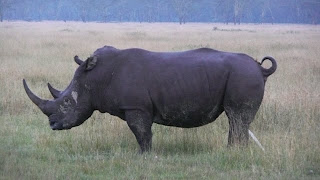 Otherwise, last night, we also saw zebras, impalas, Thompson’s gazelles, and birds: sacred ibis, marabou stork (*nasty* looking scavenger), crowned cranes (also the national bird of Uganda), egrets (they like to ride on the buffalo—I’m not sure how water buffalo made it into the big five. I don’t care how big you are; if you look like a big dumb cow and have birds perched on your back and head, you do *not* look menacing), superb starling, drongo, herons, crowned plover, seagulls, bee-eaters, and probably some others I’m forgetting.

Back at “camp”, Yann and I decided to have a cocktail before showering. I had a dawa and Yann had a Tusker beer. Dawas are something that I’d completely forgotten about since Tiffany made us drink them at Rice after a trip back home to Nairobi. Swahili for medicine, they are pretty delicious—vodka, honey, lime, and ice! Afterwards, we cleaned up in the world’s most awesome shower and headed back to a lovely dinner. We were done around 9:00 and, I’m not kidding, pretty much fell into bed. Not sure if our malaria drugs will take some getting used to or if Dickson is right and going on safari is more tiring than you’d expect.

I’ll let Yann’s pictures speak for themselves, but there were some highlights.

* We got to see the start of a fight between two black rhinos, seemingly refereed by an egret. Unfortunately, one seemed to lose interest in his opponent (instead getting more excited about trying to charge one of the vans), so there was no real violence. I’ve never understood the lure of boxing, but seeing two multiple-ton animals getting ready to duke it out was pretty cool. 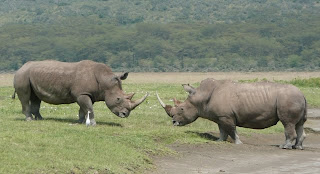 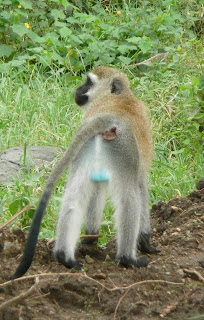 * A giant grasshopper fell into our van and crawled up my leg—very surprising and ticklish! It was very prehistoric-looking in its size. I could have sworn it was a foot long, but I guess it was only about three inches. 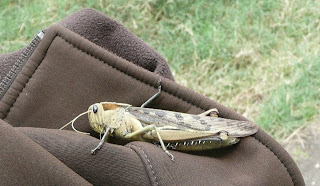 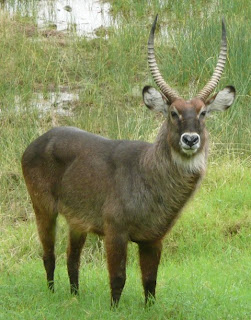 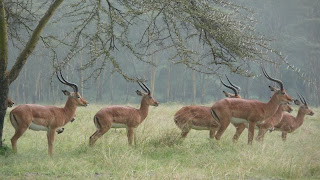 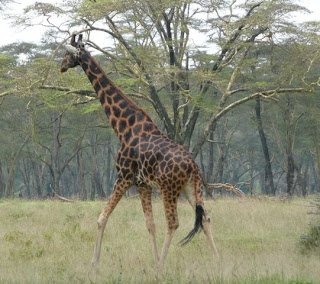 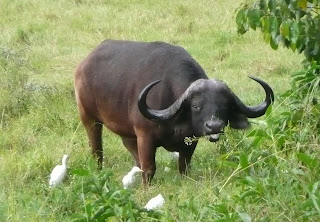 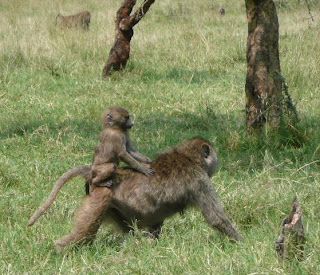