Three things you would never guess about Kenya 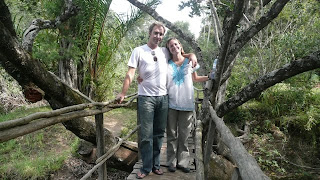 1) It's cold and wet even though it lies on the equator.
2) So far, it is the most expensive country we have visited.
3) Old American country tunes seem to be a favorite here. That's right, first country music we have heard on the trip!

The original plan for our east Africa adventure included hiking Mt. Kilimanjaro and Mt. Kenya. While planning the itinerary we received a long list of equipment required for both of the hikes: down jackets, sleeping bags, ice picks, cramp-ons, etc... We tried to find out if these were real requirements or just a standard equipment list provided to tourist. With no concrete answer available we canceled both climbs and accepted the next best solution presented to us. Destination number one after leaving Nairobi was at the Norumaro River Lodge located at the base of Mt. Kenya where we could arrange a day hike around the mountain.

We arrived just after lunch wrapping up a four hour drive from Nairobi. The receptionist got us checked into our room and told us that she would let the climbing outfit (company) located next door that we would drop by after we finished eating. Lunch was decadent (three courses--didn't we request budget hotels?) and we were excited to go settle the next days hiking arrangements. We walked into the office and introduced ourselves asking for some information about a day hike. The gentleman explained to us how we could take a 10km ride to the park entrance, then hike an additional 10km up to Met. Station (10,000ft) where we would break for lunch. Afterward we would hike back down and be back at the main gate mid-afternoon.
Everything sounded perfect and we asked how much it would be cost to go on the hike. He referenced a handy price list sitting on his desk and pointed to a number--$320 USD. Whoa, are you kidding? He smiled and said no, that was the price per person! I don't think I've ever had sticker shock quite like I experienced that moment. I looked at Catherine who was also staring bug eyed and jaw dropped in utter confusion. As politely as we could we confirmed that he really did want $640 to take us on a day hike and asked if there were any other options. Apparently a guide would only be $20 but we would have to arrange for our own transportation and bring our own lunch. WTF?

I'll skip a large part of this story and just tell you that we worked out an arrangement with Dickson and the lodge. It was a very expensive jagged pill to swallow but in the end we would get to hike a portion of the trail leading to Mt. Kenya's peak. We had an early dinner then retired to our room and lit the fireplace that sat a few short feet from the foot of our bed. The fire was complimented by a glass of wine and a beautiful woman by my side--life was good. 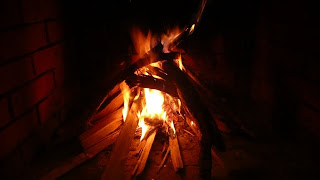 We awoke the next morning at 6:30am, prepared our bags, and marched off to the mess hall to gorge ourselves on a big "pre-mountain climb" breakfast. It was raining, really cold, and we began discussing whether or not we wanted to cancel the climb. Ultimately we agreed that we would leave that decision to the guide and otherwise proceed as planned. I spoke with the guide and asked if he had read the forecast. He replied saying that it may or may not rain but one group had already headed up earlier. Ok then, we're going hiking.

Dickson was early, we loaded up, and all headed for the gates of Mt. Kenya National Park. Park entrance fees were outrageous but we had already committed ourselves to this adventure. We left Dickson and made our way up the jeep trail our guide Richard. Things were looking up, even though it was a jeep trail it was relatively steep and the altitude made it feel like a decent work out. In addition, it wasn't too long before we spotted a group of monkeys (first of three species we would see that day) hanging out on the trail edge. The rain had stopped and we were taking in as much of the scenery as possible. 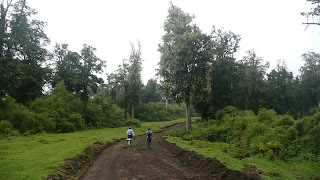 About an hour into our hike Richard pointed out some large tracks on the path. "Do you know what this is?" Hmmm, ah yes, an elephant? Correct! How neat, elephant tracks--only in Africa huh? We kept marching towards higher altitude and the prints became more frequent as well as the rather fresh looking piles of dung. The whole time I'm thinking to myself, "this is so cool, I'm hiking in Africa and hopping over elephant poo--adventure!" It wasn't long before Catherine yelled back to me and told me I needed to catch up. Apparently Richard thought there might be some baby elephants around and we should stay together in a group. Elephant tracks became more regular and then we saw the little dung piles left by the baby. As my head was in overdrive processing the environment a tree cracked in the not-so-far distance and Richard stopped dead still. He immediately motioned for us to not speak, slowly turn around, and start walking back down the road. Richard actually looked very on edge and I felt the hairs on my own neck increase their angle of inclination. All of a sudden we heard branches breaking in every direction and Richard was picking up his pace. 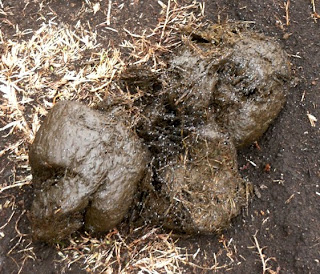 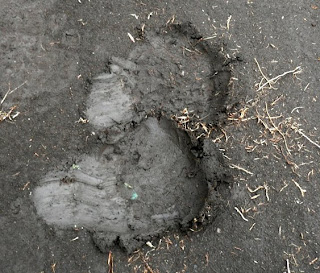 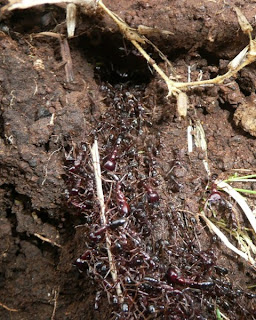 A hundred yards back down the trail we pulled off to the side and Richard made a sweep of the area. "I think we should stay here for about a half hour, elephants like this are very dangerous." We all waited and looked to the forest. Eventually Richard seemed convinced that we were in a safe position and insisted we wait where until the truck full of workers came by and we could catch a safe ride past the elephants. I asked whether or not elephants were really that dangerous to which he quickly responded with descriptions of a woman killed two weeks ago and a couple with infant trampled to death only two months ago--fair enough, let's wait for the ride. 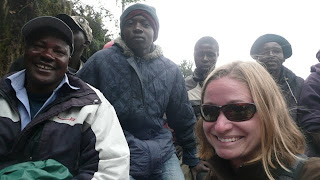 Eventually a large military green showed up filled with a bed full of at least 20 Kenyan men going up to Met Station for work. Richard hailed the truck and we climbed in the back with everyone else perched upon bags of grain tied close with natural vines. Everyone seemed very excited that 1) there were two Americans riding in the back of the truck with them and 2) we had narrowly escaped death by elephant trampling. It wasn't long after we had secured ourselves in the truck that everyone started standing and pointing to the forest. Apparently they all had caught a glimpse of at least one of the elephants--Catherine and I were buried deep in the middle of the crowd. The truck got stuck at least three times and it took most of the group throwing dry dirt and branches under the tires to get the vehicle moving. 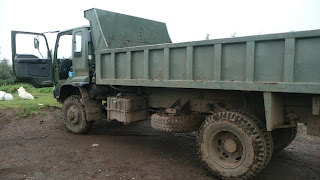 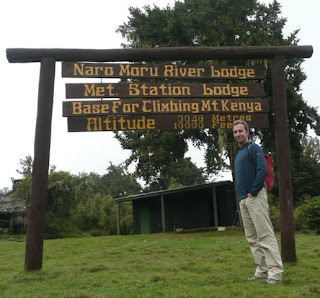 We made it safely to the top where Richard informed us that he had made arrangements with the driver to take us back down past the elephants so we could make it safely to the gate. It was 12:30pm and we took our lunch at Met Station feeling a little overwhelmed by our morning's experience. It didn't take long before we headed back down in the truck--4 deep in the front seat getting beat to death by the road. Eventually we made it passed the elephant "signs" and were dropped off perhaps 2-3km from the gate entrance. We did see another two species of monkeys which was cool and saw dozens of different birds.

Back at Dickson's van, Catherine and I glanced at one another: "That was the most expensive two hour hike we have ever taken!" Back in town we stopped at the ATM to pay our debt and headed back to the hotel. 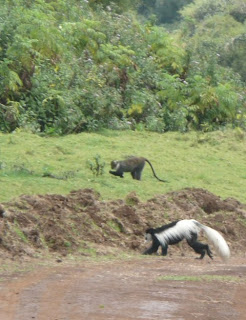 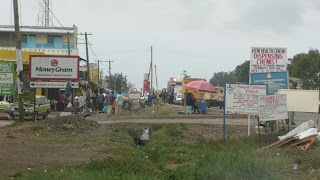