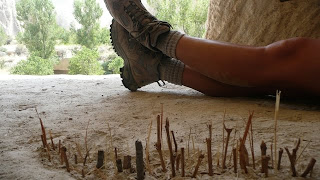 The next day was a bit light on the walking, but still interesting. We started in the tiny little village called Cat and hiked a different valley that had even more pigeon houses. When we got to Mali’s preferred lunch spot, it was only 11:15, so we walked another or hour or so and Yann found a nice cave for us to climb up to that overlooked the valley. 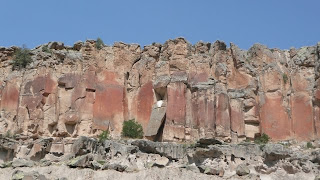 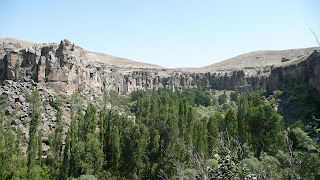 Then our driver picked us up and we drove about 45 minutes to the Derinkuyu underground city--the deepest in the area. Mali had asked us beforehand if we were claustrophobic, so we didn’t quite know what to expect. I’m not sure either of us would exactly define ourselves that way, but neither of us loves tightly enclosed spaces.

All of the tight spots eventually opened up into reasonable sized rooms and there were ventilation shafts, so it wasn’t so bad. It was really quite amazing. This population of Hittites lived up to eight stories underground to hide themselves from invasion. I know people were shorter back then, but a lot of these tunnels had us bent almost in half to walk through. 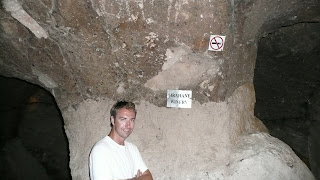 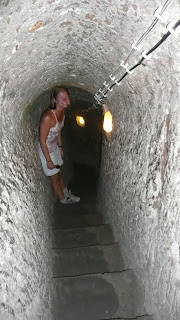 The inn where we stayed that evening is affiliated with the inn and travel agency in Avanos. Upon arrival, we met Tovi, who had arranged our trip. What an interesting woman and she has four passports--born in Israel, grew up in Australian, married a Turk, and educated in France! She invited us (and Mali) for a beer and told us a bit about the area, including how she and her husband are attempting to restore a church nearby--we would see it on the last day of our tour. Afterwards, we set out to check out some more primitive churches and a mosque.

The next morning, we were off to Ihlara Valley to see about a bazillion more primitive churches. It was a beautiful 14 km hike, despite the fact that it was relatively flat, but I think I’ve seen enough graffiti-ed, carved, and damaged frescoes to last a lifetime. We were back by about 3:00 PM, so Yann and I decided on a dip in the pool. Since Guzelyurt has a water shortage, the local supply is often shut off between 2:00 and 8:00 PM, making the post-hike shower a bit difficult. But, oh my, was the pool refreshing…I’d be shocked if the temperature were over 60 degrees! 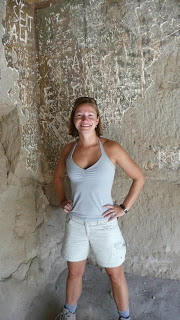 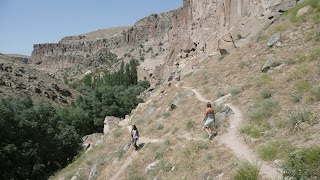 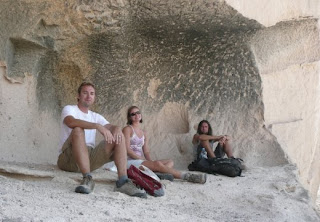 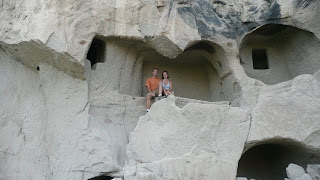 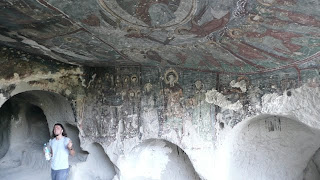 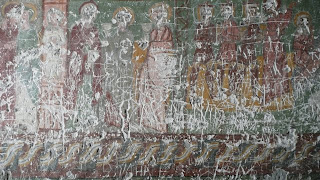 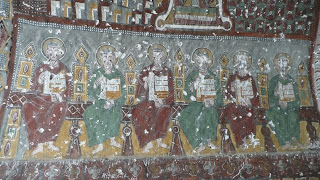 Posted by Catherine at 8:37 AM