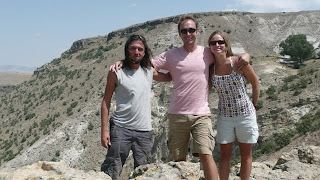 This morning, after leaving Guzelyurt, we drove about 6 km north to check out Tovi's Red Church. She told us about how she finally had it registered as a historical site and is trying to raise money to have it restored--it seems the arch especially is in bad shape and about to collapse. It was pretty amazing--built in the 6th Century, it is the last standing constructed church in Cappadocia, unlike the churches we'd seen the previous day that had been carved into the rocks. 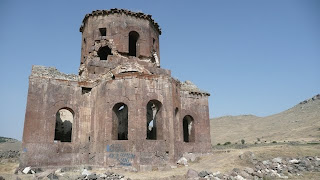 After that, we hiked through green pastures to the Meydan plateau, where you could see volcanic peaks nearby. There was also a crater lake (Acigol) with about a bazillion tiny little frogs. At first, I thought they were grasshoppers since there were so many and they were so small.

We descended down the plateau into a small village and back up to another peak overlooking the large crater lake, Nar. We had one last enormous sack lunch on a little outcropping of rock. Then we walked down to look at the lake. Evidently, there were all sorts of hot and cold sources in and around the lake, leading to a variety of temperatures. Also, supposedly, this was a "great opportunity to swim"...we looked at the garbage strewn around the murky lake--no thanks! 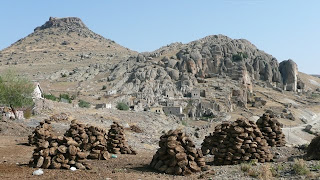 About an hour later, we were back in Avanos at the same inn we stayed the night before our tour started. We exchanged contact info with Mali, who is headed to Ankara in a few hours to pick up his next group of French tourists. Hopefully, he'll be in touch if he ever comes to the States (he sounds doubtful) and we wouldn't hesitate to look him up next time we (hopefully) make it back to Turkey.

For now, however, we will enjoy one last Turkish dinner tonight and tomorrow we are off to Nairobi!
Posted by Catherine at 8:52 AM