On our way to Masai Mara, Dickson had mentioned we could visit a Masai village after the safari the next day if we’d like. Especially since we’d passed so many herders and families in small dwellings in brightly colored clothing, we were definitely interested. It also sounded like an excellent opportunity to get out of the car. Even though the safari had been awesome and we understood the safety issues with getting out and walking around, it’s definitely a little hard to be in the car all day long.

On our way there, Dickson told us that it would be thirty bucks apiece. I’d like to say we were shocked, but, at this point, we were so used to Kenya being *so* expensive, we barely batted an eye. He told us that we should not pay the men, but allow him to give the money to the women. In his words, “Masai men are very selfish” and the money is supposed to go to the local school that supports all of the surrounding villages. The women would make sure the money went to the school. The men would “drink beer by themselves”. 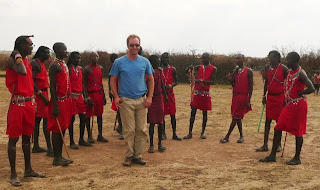 When we arrived, a group of young men outfitted in the same red clothing we’d seen along the way (and back at Rangers in Nairobi) greeted us cheerfully. After a short introduction, they told us it would be thirty bucks apiece, payable to them. We looked searchingly at Dickson, who quickly took care of it in Swahili. 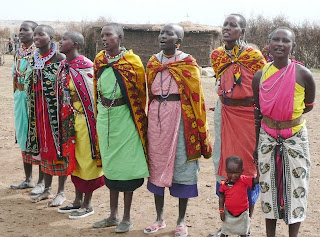 Then we were each handed a dancing club and treated to a welcome dance by the men, involving jumping competitions—they each tried to jump higher than the other. They dragged Yann in to join them and it appeared that practice does make perfect. I tried my best, but I couldn’t manage to snap a picture of him mid air. They also put a hat made of male lion mane on each of our heads which was a trophy from one of their lion hunts. Even though hunting lions is illegal, the Masai are still able to hunt one lion every four years as a means of preserving their culture. Then the women and one little girl came out to sing to us. 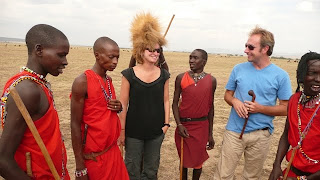 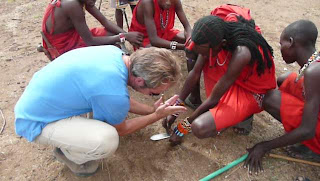 Afterwards, they told us a bit more about Masai culture. The village of about fifty people was surrounded by a fence with two doors, one on each end. Individual houses stood within the fence where each woman lived with her children. At night, the herded animals were kept in the enclosure as well. Each house was divided into four areas: an open area for baby sheep, goats, and cows, a kitchen, and two bedrooms. Polygamy is a part of the culture and our guide’s father, the chief, had five wives. When the man came to stay with each wife, he would take one room and the woman and the small children would take the other. The older children would go to one of his other wives’ houses. Each woman built her own house of sticks, grass, and cow dung over a period of about three months before the clan moved to the new village site. They also cooked and cared for the children. The diet consisted of meat, milk, and blood (of the herded animals). The older children herded the animals. 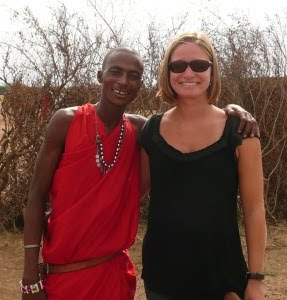 So what did the men do? They built the fence around the village and were responsible for security. Okay… Our guide quickly cut in, “that’s why you need so many wives…there’s a lot of work to be done!”

Afterwards, we went over to the market where every woman had a table of handmade jewelry and crafts. Most of it was made of beads and bones. Very pretty, but not really my style, I bought a long necklace, figuring it was still a cool souvenir and that the proceeds would go to the school. 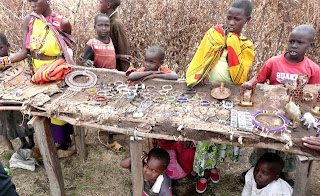 Dickson was extra-talkative when we got back to the car, probably figuring we were a little weirded out and probably a little right. We recounted our guide’s description and he agreed—the women do *everything* and he explained that that was why he didn’t want to pay the men.

WARNING—PG-13 RATING BEYOND THIS POINT!!

Dickson has a Masai friend who asked him once—when you make love to a woman, do you kiss her? Dickson replied, well of course you kiss her! His friend was dumbfounded and Dickson asked, why, do you not? His friend said, no, I don’t kiss her! When I visit each of my wives, I just go in directly and [in Swahili] let the poison out. And I don’t need to do anything else! Dickson sort of shook his head and chuckled, “that’s what they do, they just go in and [let the poison out] and then they are done.” But he also said that if you question any of the women on the Masai culture, they will “kill you”. That’s culture, but I’m still glad I’m not Masai! 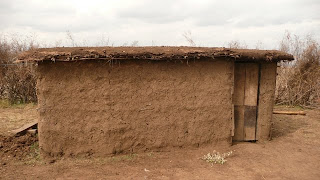 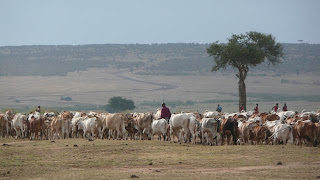 Posted by Catherine at 9:50 PM