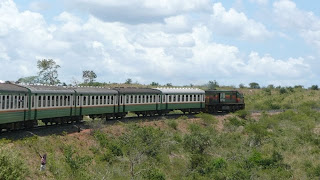 After our safari was over, we got an early start on Monday morning. We stopped for tea for a few minutes, but otherwise wound up back in Nairobi around 1:30 for lunch at the crocodile and ostrich farm. We had a mediocre lunch and decided not to pay the extra ten bucks apiece to check out the farm where the animals are raised and then sold to a popular restaurant when they are old enough.

Instead, we each had Tusker and headed to the train station for our overnight train to Mombasa on the Kenyan coast. We didn’t know the exact details, but it turned out that the train left at 7:00 PM and was scheduled to arrive about fifteen hours later. Long trip, but we had a sleeping car and the train had a dining car, so it was definitely more luxurious than our overnight trips in Morocco and Egypt. 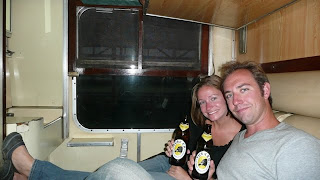 Yann had the foresight to grab a few Tuskers before we left and we enjoyed one in our compartment before we went to dinner. Dinner was surprisingly good and we even had a not terrible bottle of wine. We were pretty beat after our many days of activity, so we read for a little while, but then went to bed shortly thereafter. I woke up on and off as we stopped at various stations, but at some point, I got the feeling that we’d been stopped for several hours. I even woke Yann up on the top bunk, thinking something might be wrong, but he told me I was crazy. 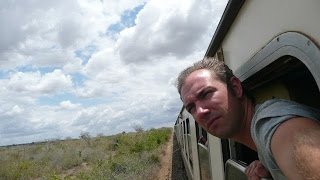 Our driver didn’t show having been told our train would arrive around 3:00 PM, but we eventually grabbed a cab to our hotel and enjoyed a much needed shower and a light late lunch. And now we’re at the beach until Sunday! 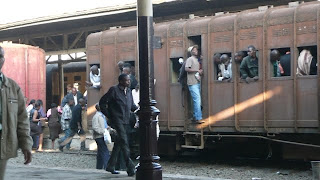 Posted by Catherine at 9:49 PM