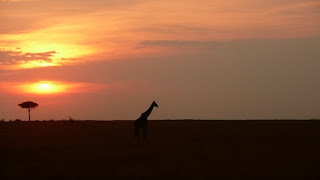 When we were in Noru Maro, I asked Yann what the big five were. He had no idea either, but my first guess was a hippo to which he immediately snorted. No way did he think we’d see a hippo—one of the largest land mammals (second only to the African elephant), they are really aggressive and have no natural predators aside from man. His thought was that if we saw a hippo we’d really be in trouble.

The next morning we asked Dickson about it and first of all he said, oh yes, you usually see hippos and no they are not really dangerous, since they are used to seeing humans anywhere where we’d find them. (Sneaking up and surprising them, however, was a different story.) He also said that if we wanted to guarantee seeing them, we could stop at Lake Naivasha on our way from Lake Nakuru to Masai Mara.

We left Lake Nakuru pretty early. We had a *long* day of driving ahead of us—at the best of times, the drive to Masai Mara was at least six hours and we were going to stop to see the hippos. After about an hour, we arrived at Lake Naivasha and checked out some kingfishers (really cool), ducks, and great white pelicans while we waited for our guide, Paul. He escorted us over to his little skiff and we were off.

Within about 50 meters, we saw some eyes and ears poking out of the water. Yann immediately started snapping away, but Paul laughed and said, don’t worry, you’ll see many more that aren’t so shy. He moved us along and then we saw a whole huge school of hippos! We watched them for a while—there were about ten of them: some large, a baby with its mother, some well submerged, and one sunning himself on a rock. They were really neat. 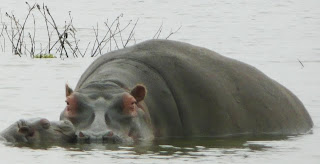 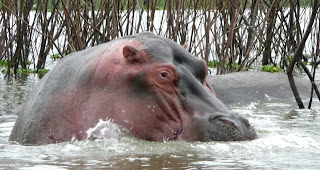 After that, we headed over to the deeper part of the lake so we could find some African Fish Eagles. Along the way, we got a couple of tilapia from a fisherman. Paul scanned the tree tops, whistled a bit, and finally chucked one of the little fish into the water. The only birds that seemed hungry were some seagulls that he shooed off expertly. He picked up the fish and set off to a different part of the lake. This time it worked and we saw the big pretty eagle swoop down within only about ten feet of us. Awesome!

On our way back, we stopped by Crescent Island, were we could see a hippo walking slowly on land. There were all kinds of other cool things: zebras, gazelles, impalas, waterbuck, and our first sighting of two wildebeests. Crescent Island is where the movie Out of Africa was filmed (one more to add to our list) and evidently a lot of the animals were moved in for the filming and then stayed. 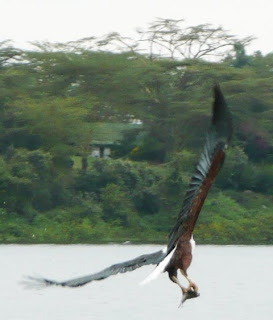 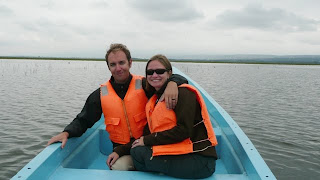 We then returned to shore, met back up with Dickson, and were back on our way to Masai Mara. I’ll admit that I’m really bad about falling asleep in the car. I was even worse about it on this trip because Yann usually sat up front with Dickson, so I would just sit in the back and doze. As we drove through each small village, I’d wake up for the speed bumps and then conk right back out. After we’d been on the road about an hour, I woke up for the speed bumps, but then kept waking back up. Dickson pulled into a gas station on the side of the road—he thought it was the fuel injectors.

Back at home, I feel like every time you have car trouble, it means taking your car to the shop and leaving it for a few days. On this trip, it seemed like Dickson either fixed himself or took the car to be fixed daily. I have no idea how sound the work was, but there’s a lot to be said about an hour versus several days. Anyway, he and another guy had the car operating again within about an hour. And that was good, because Yann and I took a walk around town, and, despite my guilt over saying so, neither of the two hotels there really appealed to us.

Dickson spent the next four hours, *flying* over dirt roads. I am absolutely shocked that we didn’t get a single flat. Although he’d have been well-prepared for that, he had three full-sized spares in the back.

We arrived at Fig Tree Camp around 3:30, which was a record, considering our two stops. Fig Tree Camp seemed like the Marriott of tented camps to me. Still in no way a “camp”, it was very nice, clean, and certainly luxurious. Unlike Flamingo Hill at Lake Nakuru, it was a bit larger and more sterile. I can’t complain, though—it seems like safari accommodations are very nice (as Tiffany had told us they would be).

We all checked into our rooms and ate a small late lunch before heading out for a quick game drive. We saw some antelopes and zebras….pretty unexciting at this point. But then we drove up to three sleeping female lions. They looked pretty much like our cats at home—lazy! One of them rolled over and stretched, but that was about the extent of the excitement.

Then we saw a male lion. He was a bit more awake and it was really amazing to be so close to him. It seemed like he was starting to get a bit sick of the gawking , though, because he stretched, looked around, and sauntered off.

We were pretty psyched since were now 60% of our way through the big five with our rhino, water buffalo, and lion sightings. I was starting to give up on seeing a leopard as Dickson reiterated how rare they were and that they are more common in the trees at Lake Nakuru. If we saw elephants the next day, I’d be happy!

That evening, we also saw a bunch of stuff that we’d seen at Lake Nakuru like zebras, gazelles, and baboons. New ones to add to the list were topi (another type of antelope), eland (the largest antelope), Masai giraffes (these are the common giraffes, unlike the endangered Rothschild’s giraffe at Lake Nakuru), mongoose, and warthogs (we’d seen warthogs before, but these were much closer). 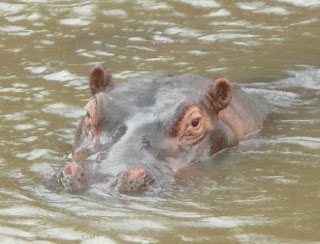 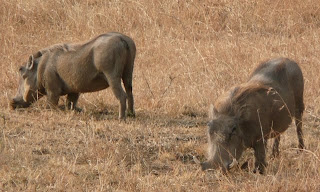 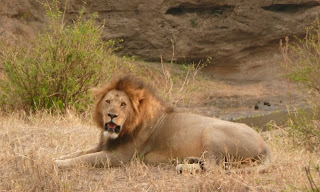 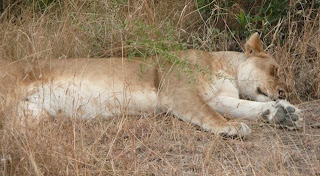 Posted by Catherine at 9:52 AM