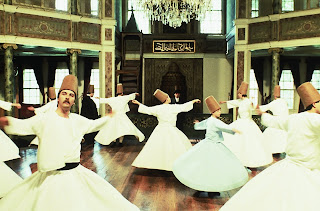 [Yup, Lindsay, it's a stock photo, but no photos were allowed during the ceremony!]

The highlight of our four days in Istanbul was definitely the sema ceremony that we got to see on Monday night. As we were wrapping up in Dahab, I told Yann it was the one thing that I *really* wanted to do on our next stop and I think he was pretty skeptical. I'd been a little intrigued by the idea since my freshman year at Rice when I saw a dance performance at Miller Outdoor Theater that was supposed to be inspired by these "whirling dervishes". I didn't know what they were, but it seemed pretty cool and like it would be a welcome break from schlepping around to all of the tourist sites.

Since neither of us knew about Sufism, dervishes, or sema ceremonies, I'll assume you guys don't either. Here's the short version as I understand it, but you should definitely consider your source and not go around repeating this as fact. :) Sufism is a mystical off-shoot of Islam. The Mevlevi order (the monastery that we visited) was founded by Mevlana Rumi in the 13th Century. This sect emphasizes service to the community and each prospective member must perform some sort of service for 1,001 days before acceptance. There are also requirements for ongoing service, but I'm not sure what these are. The sema ceremony represents the whirling dervishes' mystical union with God and how the heart is strengthened through this direct connection to the divine. The ceremony that we saw consisted of eleven men and chanting, saluting, eventually whirling in a circle. They whirled individually on their own axis, but also slowly turned in a circle around the room with the entire group.

According to the LP, most of the whirling dervish performances that you can see in Istanbul are just that, "performances". Judging from the photos and the advertisements around town, it still looked it would be pretty cool and give you a general idea of what it was all about. However, on Monday and Thursday nights, at a real monastery about 4 km outside of the city center, real sema ceremonies were held, but they recommended that you go with a local. Alternatively, there was an organization in the city, Les Arts Turcs, that organized bi-weekly talks on Sufism beforehand and would then take a small group to the ceremony. Since it seemed unlikely that we'd have a local best friend in time, we went to talk to Les Arts Turcs during our first walk around the city on Saturday night.

We walked into the gallery/cultural institution office and asked about the lecture and ceremony. Since Wednesday was the start of Ramadan, he wasn't sure if there would still be a ceremony on Monday. I was bummed, but he told us to check back on Monday afternoon. We arrived back around 5:00 PM two days later and still no one knew. They told us to check back at 6:00 PM, which incidentally was the same time that the lecture started. Since we were sweaty from traipsing around the city all day and I was not even remotely appropriately dressed for a religious ceremony, we went back to shower and called them. Still no answer at 6:00, but at 6:15, they told us to come back immediately for the lecture. It seemed flaky and weird, but we figured we'd go anyway.

When we arrived, there was a family of four (parents and a girl of about fourteen and a boy of about twelve) sitting outside of the gallery/institute with two of the guys who worked there: "Mr. Dervish" and his translator. We spent the next two hours listening to the random babbling of Mr. Dervish's views on Sufism. I wanted to poke my eyes out with something sharp. This was not a lecture and it wasn't even remotely impartial or rooted in fact (and this is definitely why you should not take any of my explanation of this night as fact). We were paying thirty bucks apiece for this--I felt like an idiot and that I'd ruined our night. I really felt for the two kids though. Considering the circumstances, they kept their sighing, staring into space, and eye-rolling to a minimum.

After the "lecture", two others showed up: a couple around our age from Colorado on their honeymoon. At this breaking point, the teenage girl told her parents that she'd die if she had to sit through the ceremony. I didn't blame her--I wanted to bail, too. Finally, I guess the parents figured they'd abused their children enough for one day and took off. Within the next thirty minutes, eight others arrived and eventually the twelve of us piled into a shuttle bus to go to the Silivrikapi Monastery.

I was glad that I'd remembered my head scarf. Upon arrival, the women were told to cover our heads and were whisked away to a waiting room in the basement with two teenage girls. After about twenty minutes, we were allowed into the...prayer hall? Not sure what you'd call it. The men (Yann and the other tourists we came with) were already sitting on the floor of one side of the seated area and we sat on the other, separated by a short wooden divider. Over the next twenty minutes or so, all of the "real" people filtered in. The men went into a separate room with windows, so we could still see them. Upstairs was a lofted area with a carved wooden balcony railing, so I couldn't quite see people, but I think it was small children and their mothers. Younger and older women came to sit with us, the tourists.

About five or six men in the separate room began playing traditional music on percussion and guitar-esque instruments and, after about ten minutes, the rest of the men started chanting. [At some point, I realized the words were being projected onto the wall with one of those old transparency machines that they used during our college lectures.] It was completely surreal and mesmerizing. Honestly, I was starting to space out a bit.

Then entered eleven men in conical-shaped felt hats and long white robes covered by shorter black robes. For a while, they just stood in a line facing the room with the chanting. Eventually, they started slowly moving in a circle, bowing to one another. They did about four rotations of this around the room, for probably about ten minutes or so. It was getting a little boring, but I tried to remember that this was a religious ceremony and that I should be respectful.

But then they removed their black outer robes and started whirling. It was the coolest thing ever! They started one at a time until they had all moved out into a circle, whirling independently in their own circles and then also moving in the larger circle around the room. Their arms were out and their heads were cocked to the side and many of them looked entranced.

[Removing the robes has something to do with letting go of the ego in order to directly connect to God. The conical hats are also symbolic of the "ego's tombstone".]

They repeated this about four times. As they whirled, two men who had retained their black robes walked around slowly, observing them. One of them was the master and I'm guessing the other was some sort of assistant. Their role was to critique and/or support them. I noticed that some of them put the black robes back on and sat out at times, presumably when they got tired.

I think the most interesting part of the whirling itself was that it was not a performance and it wasn't choreographed. One of the older men looked completely entranced and like he'd been doing this for ages. But I noticed that as the ceremony wore on, his arms started to drop--probably he was tired? Some of the younger guys, and they barely looked even eighteen, looked like they were trying so hard, but were just clunky and awkward. I'm guessing they'll get better. By far, the one who looked "the best" to me, was one of the younger ones who seemed like his turns were a perfect 360 degrees each time and his arm and head placement exactly as the "professional" dervishes from the posters around Istanbul. He was graceful and absolutely beautiful. But it's not a corps de ballet, it's a religious ceremony, so what do I even know about it? I have no idea how they are judged and how they are understood to have connected their hearts to God. I'm guessing it's an ongoing development.

After the whirling dervishes exited, the chanting resumed for a bit and then the ceremony was over. We, the tourists, piled back into the shuttle and headed back downtown. I think everyone was really impressed and taken aback--I know we were. It is definitely a bummer that we couldn't take pictures, but I think that's part of what made it so amazing and special.

I feel really lucky that we were able to do something so "legit" in Istanbul. I felt a little bit like a voyeur, but also like I got to see something that was truly a cultural experience, so I guess that's the trade-off. If you're in the city, I'd highly recommend it. Even if you can only do one of the "performance" ones, I think it would still be really worthwhile.