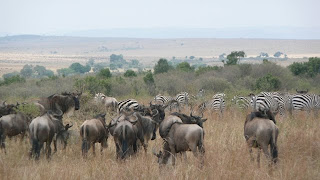 Our fourth day of safari started out kind of slowly with some antelopes. Despite the fact that I think Thompson’s gazelles are the sweetest-looking and prettiest animals alive, we’d seen a *lot* of them. Dickson told us that our plan was to buddy up with another driver friend of his and head to the river to see if we’d see the wildebeests crossing. The herds are constantly migrating in a circular pattern around East Africa. At times, the herds can stretch out for up to 40 km and getting to see them cross the river would be pretty impressive. Along the way, we saw some resident wildebeests—Dickson said they’re the lazy ones that don’t join the herd for the migration. We also saw some Cokes Hartebeest, another type of antelope. 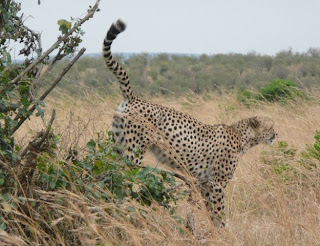 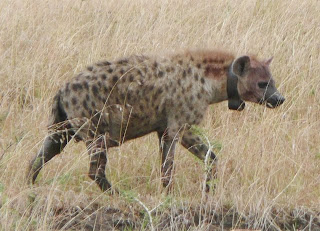 Anyway, it was supposed to be a long drive, so we settled into looking out the windows. Yann still hadn’t given up on a leopard spotting, so he continued to scan the trees. Soon we saw some hyenas. Pretty icky looking creatures if you ask me….but we saw quite a few spotted ones (there are also striped ones, but we didn’t see any) and some of them were tagged with enormous collars.

Then we took off in a different direction. Dickson said all the drivers had been talking about a cheetah sighting over the radio. Within a few minutes, we’d found it. This was really really cool—the highlight of our four days of safari so far for us (even though it wasn’t one of the big five). After about ten minutes, *everyone* had found the cheetah. I certainly didn’t begrudge anyone’s opportunity to see this beautiful cat, I know how psyched we were, but the poor animal started to look a little trapped by all of the vans and Land Rovers. He started to chase a bird, but then stopped and laid down. I whispered to Yann, “a much as I love those cute little gazelles, I’d love to see him take one of them out.” It appeared unlikely anytime soon, so we continued on our way.

We saw something *really* amazing after that: five female lions tearing apart a wildebeest carcass! It was kind of funny in that it reminded me of Safi and Simba at home the way they play with their toys. Just a much larger and much more real scale! 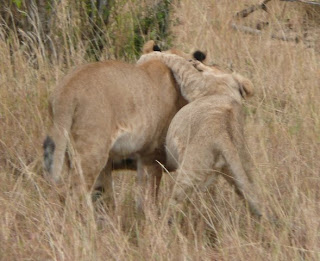 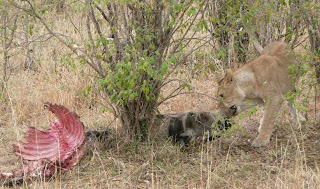 Moving on from the carnage, after about ten minutes, Dickson asked us if we saw it. Lo and behold, the elusive leopard, lounging in a tree *right* by the side of the road! How incredibly pretty and close to us, especially knowing the relative rareness…


[The people in the Land Rover in front of us had some *ridiculous* looking telescoping lenses…some in camo! Actually we saw a lot of people *dressed* in camo as well—almost as funny.]

We also saw some vultures tearing apart a wildebeest carcass—nasty birds! [I know, I know, food chain, all that….] 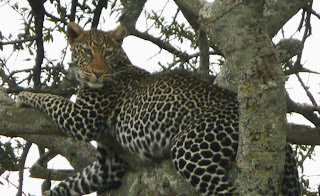 When we finally got to the river, we found out that there would probably not be a wildebeest crossing that day. Bummer, but we did get some lunch in (with the ground squirrels and the vervet monkeys). The river was actually kind of sad; there were a lot of dead wildebeests. Apparently a lot of them trip and drown in the crossing. Dickson told us they are pretty stupid…not like the zebras that rarely do so when they cross. However, we also saw an enormous hippo basking in the sun, which was neat.

After lunch, Dickson took us briefly over the Tanzanian border. Even though we’d both been bummed to cancel our Mt. Kenya and Mt. Kilimanjaro climbs, it was kind of cool to *technically* set foot in Tanzania, even if we didn’t get to stamp our passports or, y’know, climb a mountain. : ) If, after this trip, we ever get the opportunity to return to Africa, the two mountains are first on our list! 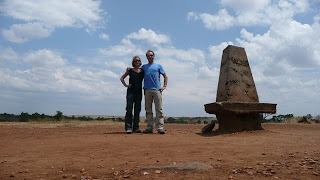 On our way back, we finally saw some elephants! Evidently the males travel solo, so this was a group of females with two babies. As we moved closer to them, this was more obvious. They started out eating on one side of the road and eventually crossed. After our experience at Mt. Kenya, we were worried that they were going to try to run us off, but they just kept an eye on us, turning to look at us occasionally (excellent photo ops), and kept the smallest baby on their other side away from the vehicle. Really really really cool! And at this point we’d seen the big five, so mission accomplished—we thanked Dickson. 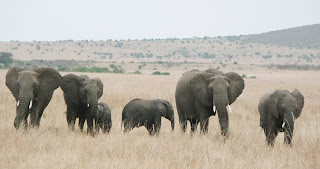 Otherwise, that day, we saw a lot of birds, but not nearly as many as at Lake Nakuru. I’m not sure if that was because we were seeing so much other cool stuff or if there were so much less brush, trees, and other stuff for them to perch on that we just weren’t seeing them. We did see the blue-naped mousebird, Madagascar bee-eater, and some enormous ostriches! 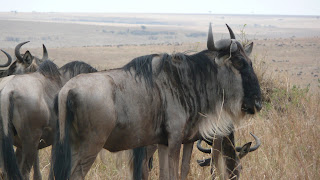 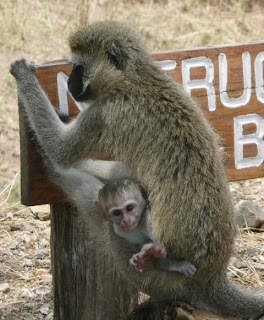 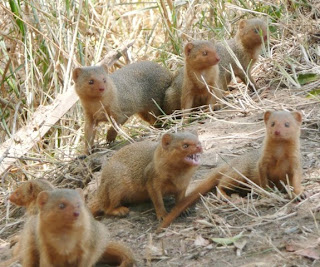 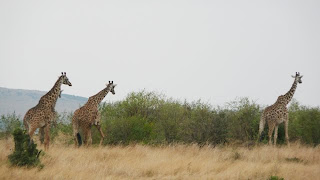 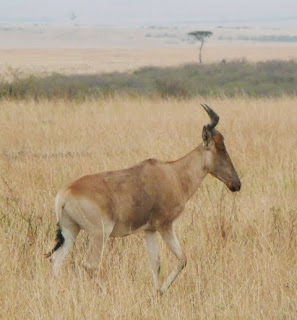 Posted by Catherine at 9:51 AM