The Sights in Istanbul 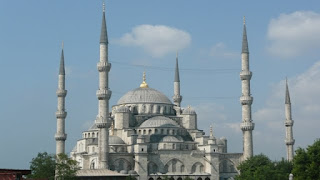 I'll start this off by saying we *loved* Istanbul. Not that we didn't like Morocco and Egypt, but it was such a huge change--everything was green, clean, orderly, and extremely pretty.

We got into town in the late afternoon, made it through customs easily, and were picked up by our hotel--what service! Since we were in town during the height of the tourist season, we'd had a hard time finding a reasonable hotel. It was a little more than we'd hoped to pay, but once we got checked in and saw the view of our little street in Sultanahmet (the old section--also the touristy section), we were quite content. We took off for a little walk around town, taking in the greenery and order after almost six weeks in the desert and less western cities. We quickly found the place that I wanted to contact about the whirling dervish ceremony, some of the major sights, and the water. We had a very nice dinner overlooking the town and formulated our plan of attack. We'd already realized that three days in Istanbul was not nearly long enough.

The next morning, we enjoyed a lovely breakfast at our hotel. I'm not sure why I thought I was going to be so cheese-less on this trip...Turkish cheese is fantastic and plentiful, especially at breakfast. I also *love* the tea. Yann drinks it sometimes, but he's still more of a coffee person. Then we were off to the Blue Mosque. 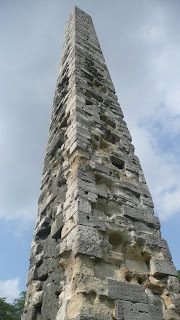 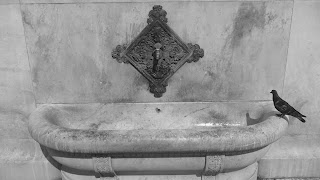 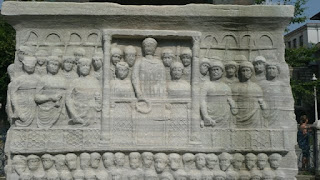 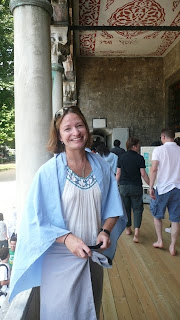 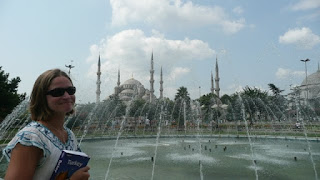 One of the cool things about Istanbul is that the main tourist sights are all in easy walking distance. The Blue Mosque was closest to our hotel, but that wasn't really a real to have to start there. Anyway, I quickly realized that I may have relaxed my dress too quickly--I needed to have my knees and shoulders covered to enter the mosque. We scoped out the crowd and realized there were a ton of women in miniskirts and shorts--what was the deal? Well, it turned out that they had plenty of wraps and skirts to lend the disrespectful among us. I felt really guilty and like big, brazen oaf, but quickly got over it once we got in. Absolutely beautiful!

After that, it was on to the Aya Sofia. Apparently, that is the English spelling, but I remember studying it in art history and it was Hagia Sofia. So however you've heard of it, it definitely lives up to it's reputation of magnificence in Byzantine architecture and Christian mosaics. In the 15th century, it was converted to a mosque, as it remained for 500 years until declared a museum by Ataturk in 1935. It's really interesting to see both the Christian and Islamic aspects to the structure and, all religion aside, it's just beautiful structurally and artistically. 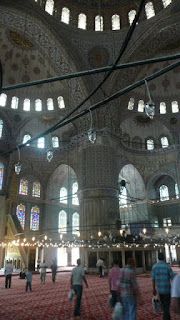 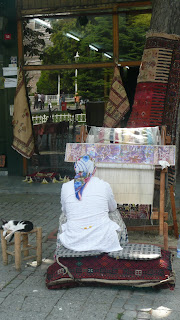 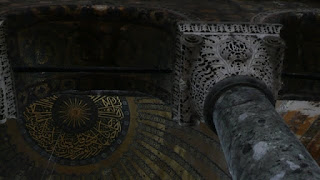 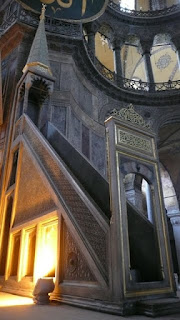 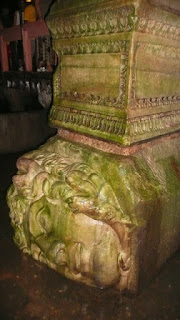 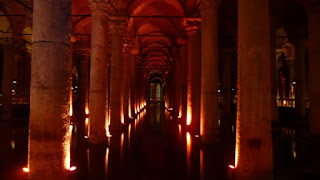 The next day, we spent most of the day at Topkapi Palace. Y'know, I hate to complain, but what I remember most is that it was really hot and really crowded! But now that I'm done whining, it was a really cool structure and had been added on for for many changes in regime. It started in 1459 when Mehmed II brought down Constantinople. One of the coolest parts was the art gallery that housed portraits of the sultans throughout the ages. And then the Treasury had all kinds of amazing jewel-encrusted stuff--thrones, jewelry, weapons--unbelievable how much there was in terms of gold and precious gems. 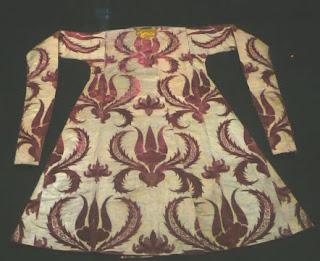 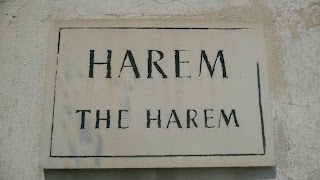 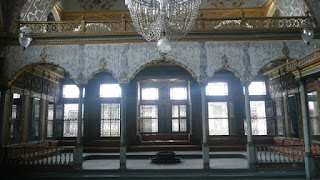 Hands down the coolest part of the palace was the harem. Contrary to what we'd believed, it wasn't just housing for the concubines, but also for the royal family. There was amazing tile-work and really neat rooms. They also made a really big point of emphasizing how the concubines were involved in the palace life. They gave birth to the heirs to the thrones and took care of a lot of the daily administrative duties.

After spending the day at the palace, we were off to figure out how we were going to see the whirling dervishes that night. We got back way later than expected (almost midnight) and wound up having dinner in Sultanahmet close to the hotel. The better restaurants were supposed to be in the new area of town across the Galata Bridge, but we were always so busy during the day that we just never made it that far at night. Next time, I guess. 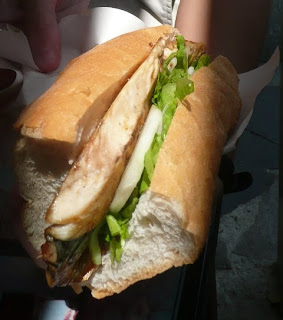 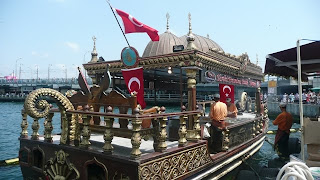 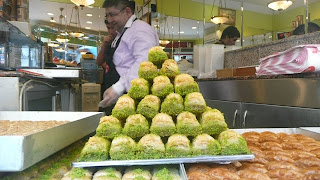 And then the next day was full of shopping and eating. I'm not even a dessert person, but I have a newfound love of baklava and Turkish pastries--YUM!

Our trip to Fethiye by way of Dalaman on Wednesday was early, so that was about it in terms of Istanbul. I think you need at least a week to really take the city in. It is so interesting and pretty and it just seems like there is a ton to do. But I think we did a good job of packing our three days full of culture and excess!
Posted by Catherine at 10:46 AM