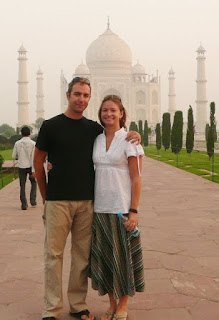 It was a long trip from Ranthambore to Agra. We left the hotel around 8am and Surat told us it would take between 7 and 8 hours to make it to Agra. After two weeks of traveling in the back of this little car we were now relative experts at maximizing comfort in the back of our Tata Indigo. We put the iPod on over the FM transmitter and settled into our books. One quick side note here, neither Catherine or I have ever been able to read in moving cars and somehow we have developed an immunity on this trip. It is strange enough to both of us that we don't really talk about it, almost like we would jinx this new found skill that we have learned.

Between reading and rocking out I entertained myself photographing trucks along the side of the road. One thing I have absolutely loved on our trip is how people in other countries decorate their trucks--we are talking pride that goes well beyond my fellow southerners twinkling eye as he looks over his F-150. Ownership of a hauling truck in these places is a sign of success and the fierce pride is on display across every inch of the machine. What was particularly interesting to me was how the graphics in India encompassed the use of the horn. EVERY truck has big letters on the back asking nearby traffic to blow their horn. That's just the way it works here, no turn signals, no abiding by lane markings, just blare your horn and haul ass if there is an opening.

It was a long haul, but we finally pulled into our hotel as the sun was setting. We quickly got settled and ran back out to make a run for the ATM and mail out box of goodies back home. Over dinner I told Catherine that I thought it would be a good idea to take the locals advice and head to the Taj Mahal at 5:30am to see the sunrise. After she shook off the surprise of my suggesting an early wake-up call she happily agreed and our plans were made. 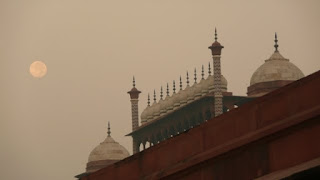 Dawn was far away from cracking as we piled into the car and met our guide for the day. Within a half hour we had tickets and were standing in a line that was already at least 100 people deep waiting for the gates to open. By the time we made it through security the sky was grey blue and the sun was just peaking its head above the horizon. We made our way through the main gate and enjoyed a pretty view of the moon falling to daybreak. This was it, the big event, what everybody comes to India to see. The Taj Mahal and all of its legend stood before us along with at least a couple hundred tourists (better than the thousands that would arrive in a few short hours). It really is a beautiful building and pretty awesome to finally see it in person. Neither of us were brought to tears or anything like that but both agreed that is was one of the more beautiful buildings we had seen. I took about 500 pictures, but don't worry you only have to look at a couple. The surface did change color as the sun climbed into the sky and I tried to capture as much as I could. Posted in this entry are photos of: 1) Sunrise, 2) Mid-morning, 3) Mid-day from Fort Agra, and 4) late afternoon from the backside across the Yamuna River. 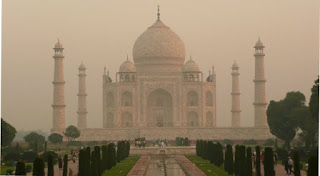 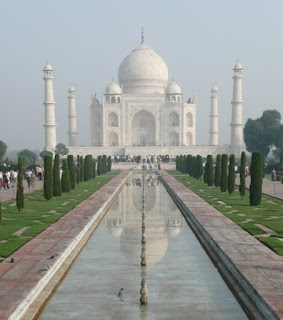 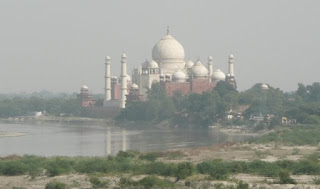 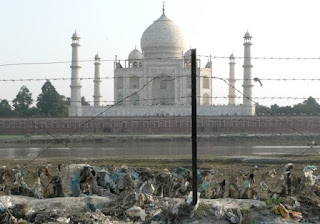 After two hours I had enough photos to keep me busy editing for at least a couple of days and we headed back to the hotel.

Breakfast and a quick nap served us both well and we met back up with our guide who seemed to be more focused on recovering from his birthday celebrations the night before than guiding. Fine with us, we prefer the quiet. It was mid-day and hot so the guide told us he'd take us to the "obligatory" marble factory where we would see how the intricate designs decorating the Taj Mahal are crafted and placed in marble. We are very familiar with this game, but went along with a friendly smile and resigned ourselves to enjoying a free glass of tea--what on earth would we want that was made of marble. We were enjoying our tea and making snarky remarks about the sales pitch until we went into the show room and saw some really amazing stuff. They had table tops with thousands of pieces of semi-precious stones inlaid into marble with jeweler like precision. Only one problem--expensive! 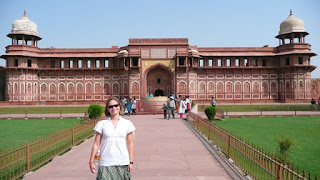 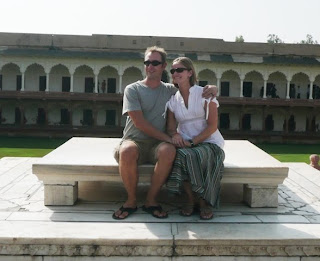 After our education in jeweled marble slabs we grabbed lunch and prepared for the afternoon heat. Agra Fort was a fairly uneventful tour. Most of the property is still used by the military, however the older sections overlooking the river are still open to the public and you can glimpse out at the view of the Taj Mahal just like its creator Emperor Shah Jahan did after his son imprisoned him. 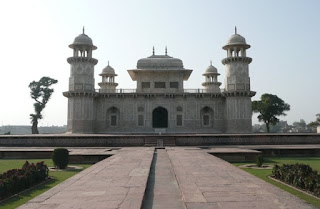 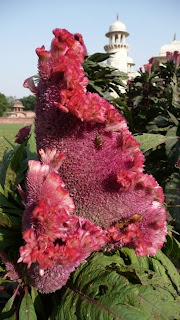 It was still early in the afternoon and we had several hours to kill before our train left for Varanasi. We parted ways with our guide and asked Surat to take us over to see the "baby" Taj Mahal. With similar architectural features this building was allegedly the template upon which the Taj was designed. We strolled through enjoyed the monkeys and headed back to Surat in search of additional activities. A garden sits across the river and directly behind the Taj Mahal and we decided to spend our last hour in Agra taking in another view of its legendary monument. It was quite a different view with the trash and barbed wire fence creating an odd frame for the exquisite Taj. We met some kids, took some pictures, and called it a day. It was time to say good bye and get pumped about our first overnight train trip in India. 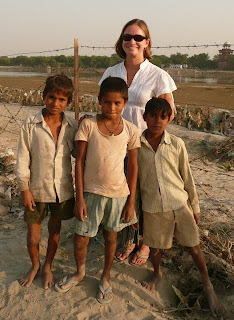