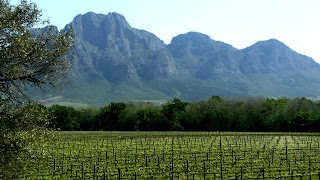 I probably reiterated ad nauseum how completely *wretched*, *ghastly*, *putrid*, and *abominable* the wine was in Madagascar. Yann and I wound up seated separately on our flight from Tana to Johannesburg and when we met up after the flight, his first words were "wasn't the wine awesome? I had three [airplane] bottles!" I said, "no, it's barely even five o'clock!" (y'know, because I'm virtuous like that) We had a few hours' layover in Jo-burg and then the actual flight to Cape Town and, he was right, even airport/airplane wine was fantastic!

We'd already decided we didn't want to rent a car, so the first order of business on Friday morning was to to find a great white dive for Yann and a tour through the winelands for both of us. The hostel down the street had a small travel agency inside and they gave us the brochure for African Story Tours and said that the owner was "the best in the business". We booked their all-day tour that included visiting four wineries in Stellenbosch, Franschhoek, and Paarl, lunch, and a *cheese* tasting.

Our driver, James, picked us up at about 8:45 AM and told us we had seven more to pick up. Over the next thirty minutes, we gathered three Italian women, an Australian couple, a French man, and a German man. It seemed like a pretty good group. 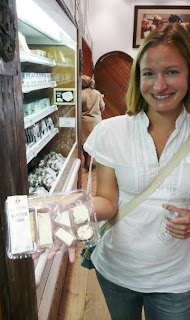 Before 10:00, we arrived at the first winery in Stellenbosch, Villiera. One cool thing was that they were very into sustainability and tried to implement green aspects into their grape production and power consumption. There, we tried three sparkling wines (methode cap classique) and James gave us a cellar tour while explaining methods for making sparkling, white, and red wines. Then we tasted *five* more wines: chenin blanc, gewurztraminer, merlot, syrah (from the sister winery in France), and a port-style fortified wine. Whoa, we still had three more wineries to go? South Africans know how to taste wine!

Back in the van, James asked if we'd like to go to a rustic farm-style winery with a wine that tasted like chicken poo (surely he was joking) or a super-fancy upmarket place. It was unanimous--we wanted to drink the chicken poo! The winery was Bellevue and wound up being our favorite. It was surrounded by eucalyptus trees and all of the wines had a very faint mint taste. We tried two pinotages, a claret, a petit verdot, and a pinotage/merlot blend. I can't remember which was the chicken poo wine, but it was very earthy!

At this point, we were all loosening up and the folks with us were very cool. The Australian couple was five days into a year's worth of travel they planned to do through Africa, Paris, and South America, the French man was spending some time in South Africa before volunteering with kids in Mozambique for two months, and the German man was in his first stop of about six months of travel. He had quit his job in insurance and wanted to be a commercial pilot when he returned home. The Italian women were all on vacation from working for an Italian corporation in Mozambique. They were very nice, but kept to themselves.

The drive to lunch at Le Pommier was a bit rowdier. We'd pre-ordered with most people getting bobotie pie, a South African sort of shepherd's pie including apricot chutney. I stuck with the chicken curry and Yann had tried bobotie pie the day before on his dive trip and opted for the burger. :) It was a very nice meal and once we were refueled, we were on our way towards Franschhoek and the Solms Delta winery.

Solms Delta was an absolutely beautiful property and we did our tasting outside on the lawn overlooking the vineyards. Also, one of their wines had been featured in the book 1,001 Wines to Try Before You Die. We tried a chenin blanc, another white, a rose, a pinotage, a shiraz, and a sparkling lambrusco-style red. It was a nice way to spend the gorgeous afternoon, but we didn't enjoy the wine very much. 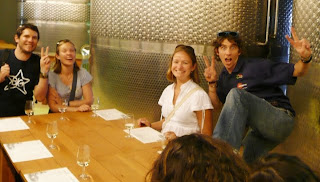 Our last stop was in Paarl at the Fairview winery where they also made their own cheese! We started the tour off saying hello to a couple of the goats. Then we did a tasting of sauvignon blanc, chenin blanc, viognier, pinotage/viognier, carignan, and shiraz. Too bad they told us that we could have unlimited cheese-tasting because I tasted each one at least once (and sometimes three times). All of them were house-made and shockingly inexpensive...I talked Yann into buying three. At this point we were feeling pretty hospitable, so we also purchased some wine to share with our new buddies on the way back to the city.

The number one reason wine-tasting in South Africa is cooler than wine-tasting in California: instead of spending more than you'd normally spend on wine, you spend *less*! How cool is that?!

All-in, it was a wonderful day (even if it was a *very* early night and we ordered bad pizza for dinner): met some cool people (including James, who was a riot), drank some wonderful wine, took in some beautiful scenery, and ate some delicious cheese! 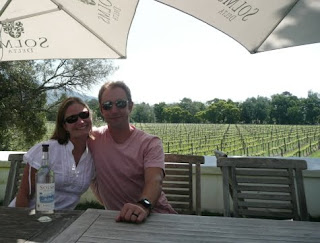 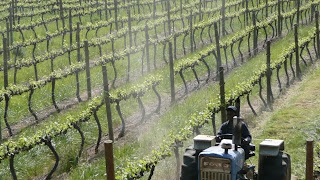 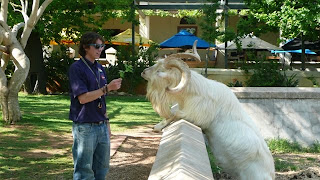