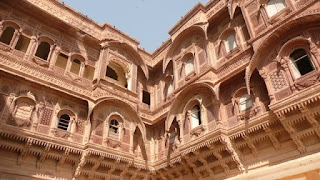 Our first morning in Jodhpur, we woke up in pretty good spirits—maybe it was the Dussehra festival the night before, maybe we were over our jetlag, or maybe we were just getting used to India.

The first stop of the day was Mehrangarh, the huge fort overlooking the blue city. Many of the cubic buildings of the old part of the city really are painted powder blue—it made for a really cool sight from the fort walls. It sounds lame, but we got the audio tour of the fort and palaces, which was actually really interesting. [I talked Yann out of the zip line tour of the city afterwards.] 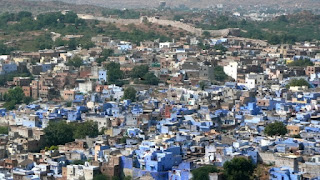 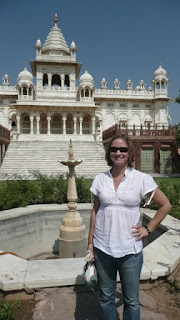 Next, we stopped at Jaswant Thada, a white marble memorial to Jaswant Singh II. After the completely packed fort, it was nice and peaceful and there was a pretty view of the fort. Outside, there was a guy playing a handmade violin-esque instrument that we’d seen and heard quite a bit around Rajasthan. 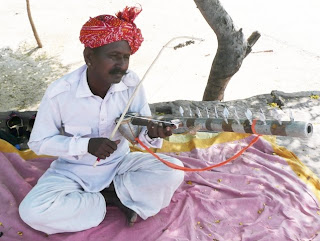 Surat gave us an excellent (and cheap!) lunch recommendation in the old city. Since leaving Delhi, we’d been eating mostly vegetarian for two reasons—first, meat usually comes hacked up and still on the bone, which is just kind of a pain when it’s in sauce and you’re dodging bone splinters and, second, the food is so flavorful that meat isn’t very necessary. Of anywhere else we’ve been, India has definitely had the most consistently delicious (and inexpensive) food. At any rate, Surat usually had great vegetarian recommendations for us.

After lunch, I dragged Yann to the Umaid Bhawan Palace…okay, despite the change in mood, maybe he wasn’t *entirely* excited about seeing every palace possible!

That evening, we had dinner on the rooftop restaurant of an old haveli converted into a hotel near the clock tower. Awesome day! 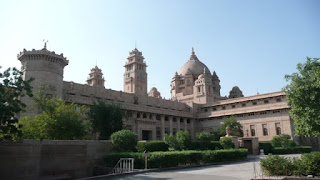 Posted by Catherine at 2:37 AM