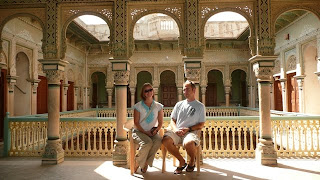 Now we were off to Mandawa. We were still in pissy moods and trying to figure out how we were going to endure the next twelve days of our drive around Rajasthan.

Mandawa is in the middle of Shekhawati, a region that flourished in the 18th century. It’s full of havelis, traditional and elaborately decorated private residences, in small rundown villages.

Along the way, we stopped in Nawalgarh at the 108-year-old Ramnath Poder Haveli Museum. Mr. Poder had been a successful businessman and they had converted his former residence into a museum. The mansion itself was very beautiful—full of colorful frescoes and carved wooden doors. Most of the rooms had some sort of Rajasthani exhibit. One had miniature models of the major palaces, another had model transportation, etc.

Once we arrived in Mandawa, we took a walking tour with a local guide around a few of the old havelis. They were very pretty, but we were more interested in getting back to our hotel to study the map and figure out how to cut our tour short. But before we could escape it was time to play dress up the tourist! 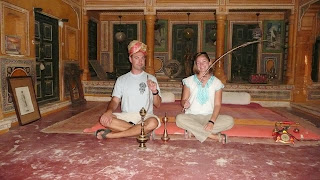 We decided the main thing that we wanted to cut out was the camel safari trip to spend the night in the desert. We’d done something similar in Morocco and the desert in Jaisalmer was supposed to be much less impressive than the dunes of the Sahara. Back in our room, we looked at the map and thought it looked reasonable to cut out the desert trip and the one night in Pushkar. I figured, since we’d already paid for it, any changes we made would be a sunk cost. Yann, however, thought we could get Mr. Sharma to reimburse us, at least partially. I let him make the phone call.

The next morning, he proposed that we cut out the four days we’d suggested, but add a four day trip to Varanasi. If we wanted to cut the tour short, he would only reimburse us about $130--I know, what a deal. Since Varanasi should be a change of pace from Rajasthan, we decided to do it. 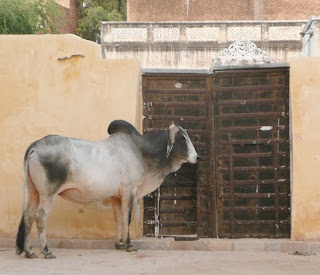 Posted by Catherine at 5:27 AM