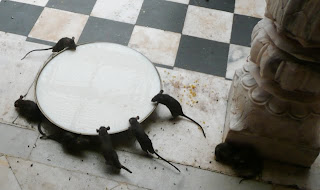 The next morning, we were off to Jodhpur. Apparently, it would be a pretty long drive, but first we’d stop at a temple outside of Bikaner in Deshnok.

The Karni Mata Temple was definitely an experience. Evidently, it’s usually fairly empty, but with the Navaratri festival (the nine days leading up to Dussehra where good prevails over evil) underway, it was packed—it’s an important pilgrimage site. 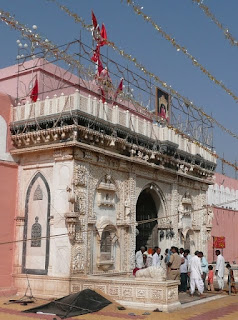 According to Hindi legend, Karni Mata asked Yama, the god of death, to bring the son of a grieving storyteller back to life. Yama refused, so Karni Mata retaliated and reincarnated all dead storytellers as rats so that Yama would have fewer human souls.

Since the temple is completely infested with the holy rodents, I’m sure there is usually an ample supply of food crumbs and milk saucers scattered about. However, I’m not sure if the temple is usually quite as “stocked” as when we were there with so many people bringing their sweet and grain based offerings. As with all temples, we were required to remove our shoes and walked barefoot among the crumbs and rat droppings. There were rats *everywhere* (it’s considered good luck if they run over your feet—we were not so “lucky”) and we lasted a good ten minutes before I told Yann I was ready to leave whenever he was… 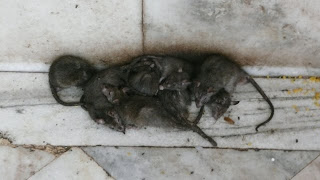 Outside, we brushed our feet off as well as we could on the concrete before putting our shoes back on. Once we were in Jodhpur, we’d give our feet a good scrub. Neat place, but definitely the filthiest place I’d ever walked barefoot—including the zebu dung infested streams off of the Tsiribihina River in Madagascar! 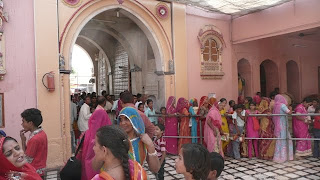 Posted by Catherine at 2:35 PM