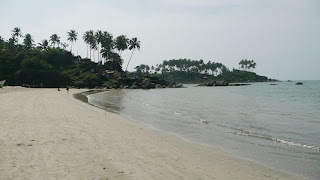 We’d probably hyped Goa up a bit too much in our minds. Between the fact that it was supposed to be one of the more laidback parts of India and the fact that we’d be on our own schedule, we were *so* excited to get down there.

Even though it’s a fairly small state, we had a hard time picking where we wanted to go. We were looking for somewhere to stay (potentially) for up to three weeks. I basically wanted to find somewhere really quiet that offered yoga twice a day. And after our hotel in Varanasi, I really wanted a hotel with clean sheets. Yann wanted somewhere that he could run every day. If he wanted to go diving for the day (India’s best diving is supposed to be in the Andaman and Lakshadweep Islands and getting there sounded very expensive), everything seemed close enough. Otherwise, we didn’t care a whole lot as long as we could chill out and not have anyone telling us what to do.

With the help of the trusty LP, we narrowed it down to three places. Mandrem was way up in the north and supposed to be very quiet with beautiful beaches. We wondered if it would be too quiet. Palolem was way down in the south and also supposed to be quiet, but maybe not as much so. The LP said it was the place to be if you wanted to yoga, tai chi, reiki, or massage the days away… And in the middle were the fancy resorts. That sounded pretty nice for a couple of days. However, since we didn’t want to pay those prices for three weeks, we wondered if we ought to go ahead and get settled elsewhere. In the end, we decided on Palolem.

Like a lot of Goa, most of Palolem’s accommodation was supposed to be beach huts. Every year, these huts are torn down at the end of the season and then rebuilt at the beginning of the next after the monsoons have subsided. We decided to book a solid hotel for a couple of nights and then we’d find somewhere else to move over the following couple of days. 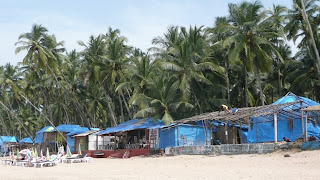 We arrived pretty late on Thursday night—-it was almost 10:00 PM. We were greeted by the security guy who handed us a bottle of water and told us the restaurant only did breakfast. We’d eaten a little on the plane and didn’t really know what our options were or if anything was open. So we decided to head to bed. Our room was huge and seemed pretty clean, but it was really simple and sterile…maybe we’d needed a couple of days at the fancy resort after all. Neither of us were that excited, but figured there was nothing to be done at that point anyway.

In the morning, everything looked better without the glow of fluorescent bulbs. We had some breakfast and took off towards the beach in search of the one hotel we knew of with yoga. We finally found it, confirmed that they had classes every morning and evening and even looked at some of the rooms. They seemed expensive for what they were. 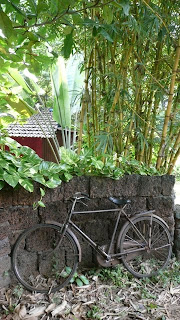 Then we found the beach. It wasn’t bad exactly. It just wasn’t what we were all excited about. And to be honest, we’ve probably gotten a bit spoiled with spending so much time in the Bahamas and the gorgeous clear water and white sands. But we walked all the way up the beach, checking out a few huts along the way. A lot of them were still under construction since it was still right before the season officially started. As much as the Palolem was supposed to be sleepy, it seemed pretty crowded to us.

However, the LP told us that if even Palolem seemed too happening, we could head further south to Patnem. In the Palolem, the beach had been fairly clean, despite the numerous cows that wandered it and the odd bit of garbage here and there. Patnem was certainly quieter—-and with reason! The beach was absolutely filthy. There was no way that would be relaxing for a couple of weeks!

We decided we’d leave the next day and try Mandrem. If that didn’t work out, we’d check into a fancy place in the middle for about five to seven days to relax, finalize our plans for Nepal, and just accept that it was time to move on from India. 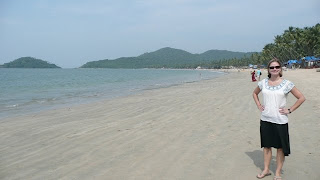 Posted by Catherine at 8:59 AM