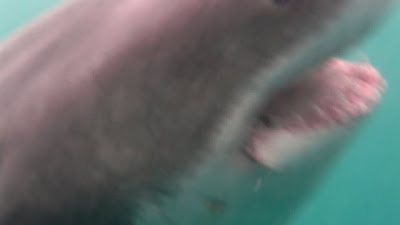 My mom will attest to the fact that I have wanted to go cage diving with great white sharks since I was a teenager and long before I had ever put a regulator in my mouth. An unbelievable amount of fuel was thrown on this fire when we met a pack of Aussie dudes in the middle of the Sahara desert and they showed me pictures from their recent white shark dive in South Africa. It was this passion that became the primary criteria (in my book at least) for visiting Cape Town. We decided before we got there that we had two objectives: 1) I would dive with white sharks and 2) we would drink some of the region’s finest wines. After those items were completed we could do whatever we wanted even if it was as simple as sitting still for a few days. 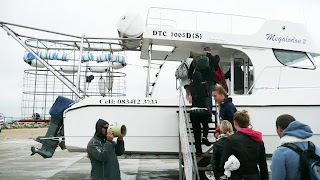 After wrapping up breakfast on our first day in CT we dropped our very dirty laundry off at a local wash and hit the streets in search of a guide book. As luck would have it we stumbled into a “Backpackers” hostel and asked for some help. The lady working the desk couldn’t have been more helpful and we left with a handful of great material as well as a recommendation for an eco-friendly cage dive operator. By 6:00pm that day, I had booked my slot on the boat that would be heading out Monday morning. Sunday afternoon, I received a text message instructing me to be ready for pick-up at 5:00am. 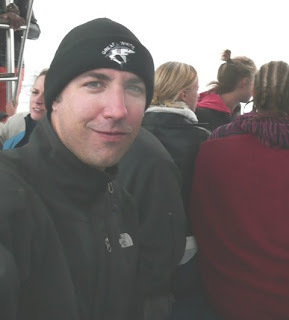 It was early but I didn’t care, I was about to go on the hunt for white sharks. Sightings are not guaranteed but luckily it was still the high season so my odds were pretty good. I packed up some swim trunks, my dive logbook, some Dramamine, my fleece and jumped on the bus bright and early. We arrived in Gansbaai at 7:30am where we were fed a light breakfast and given a briefing about white sharks and what to expect on our trip. At 8:30am we were at the harbor and it was windy and freezing. Our dive master/tour guide, Veon, had informed us it would be windy (blowing 40 knots) but once we got to the islands it would be fairly protected—good thing I decided to take Dramamine. The wind was utterly brutal and my fleece just couldn’t hold up considering I was in shorts and flip flops. I broke down and went into a harbor shop where I managed to find a “GREAT WHITES” fleece hat which became my unintentional souvenir.

Fifteen of us loaded in the boat and huddled together on the lower deck as we screamed through 8’ swells and 40 knot winds for 20 minutes before reaching our destination. Most folks were looking pretty cold at this point and several people were getting green behind the gills. Veon led us all to the top level observation deck and gave us the lowdown. Divers were to go down and get suited up, observers were to sit back at the top deck , and pukers should find a rail below. Before our briefing ended Veon quickly pointed to the sea and we all witnessed a white shark take down a seal about 200meters off our starboard beam. There was blood everywhere and this shark was going to town--this is gonna be AWESOME! 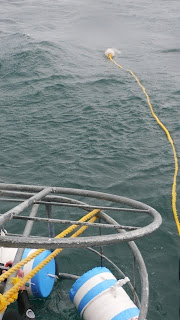 I wasn’t horribly excited pulling the damp 7mm full body wet-suit up over my torso but I would appreciate it soon. There were about 8 of us going in the cage and I managed to be the fourth in the first group that went in. The 12°C water hit me like some sort of otherworldly stimulant and it took several seconds to get my breathing back to a consistent rhythm. Veon threw a weight belt over my shoulders and passed down my trusty Lumix in its clumsy bag. Within a few short minutes I heard “NOW, NOW, NOW,” took a deep breath and submerged my head where I would then lock my feet at the bottom of the cage. Sure enough a 10’ adolescent male was coming straight towards us and checking out the tuna head teaser which crew members were rapidly pulling back towards the cage and boat. It was unbelievable I could have literally stuck my arm out of the cage and “pet?” this shark. I’ve watched shark week for a long time but I cannot start to tell you how much cooler it is to be in close proximity of these animals. They are so prehistoric looking and intimidating—no wonder they are kings of the sea. [Actually I found out recently that killer whales are, they have been documenting attacking great whites.] 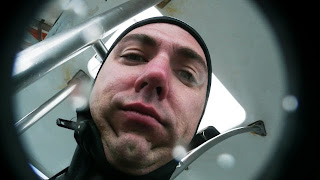 Between being pounded by the waves, dealing with the cold water, adrenaline, and being VERY careful to keep your limbs inside the cage my hopes at taking some spectacular photos were quickly dashed. I was down for about 15-20 minutes before we were taken back on board and the next group of four went down. I stood directly behind the crew member who tossed the teaser line in front of the cage and watched for another 15 minutes or so as we got another 2-3 sightings in. The second group unloaded from the cage and Veon asked who wanted more. I was shaking but who cared—how often do I get to do this? The second plunge into the water was significantly more shocking than the first. I fumbled with the camera for a few short minutes before I said screw it and handed it back up to Veon. It was time to focus on watching sharks. Another 15-20minutes in the cage and another handful of eye-to-eye encounters and I couldn’t get over the shivering. Just before I threw in the towel Veon announced 5 more minutes tops and I’m pulling you guys out. My hands were purple when I climbed back on board and there was no way I was taking off that suit until I was back on dry land. Of the fifteen people on our little adventure at least half were either blue and shivering or had spent the last hour puking their brains out.

Back on land and in dry clothes we went back to have lunch and take a look at the videographers work from our morning’s outing. Veon explained to us that we had seen four sharks in total: two 8 foot, one 10 foot, and one 12 foot adolescent male. They are extremely solitary creatures and would only approach the boat if nothing else was around. We saw all adolescent males because they are the curious ones willing to come check out the smell of chum and a couple of tuna heads. Older white sharks are apparently extremely skittish and are rarely seen on these type of tours.

After lunch we loaded back in our van for Cape Town. On the way back the driver stopped in Hermanus at a viewing site for the Wright Whales which were currently inhabiting the bay as part of their breeding cycle. I have seen a couple of whales at a distance but nothing ever like what I witnessed in Hermanus. A mere 50 meters from shore we saw at least five different whales all frolicking in the surf. They would push their massive heads into the water and then splash back down giving the occasional “high five” with their tales. It was very cool and I was sorry Catherine had missed this part of the trip.

I was home at 4:00pm that afternoon and pretty tired after a long day of observing marine wildlife. We had a fantastic sushi dinner and nestled in to bed ready for sleep and ready for our next big day of wine tasting! 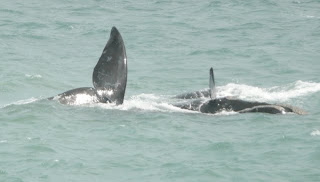 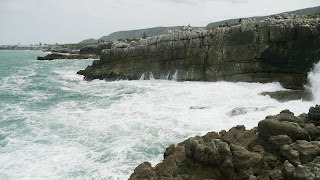