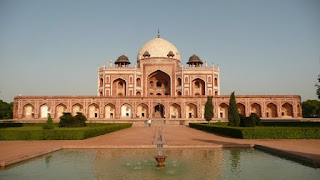 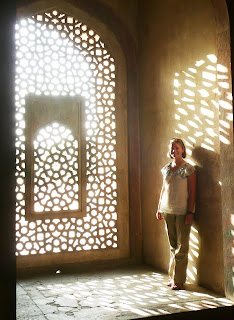 When we booked our tour through Rajasthan the company director had thrown in a day and a half of car use while we were in Delhi. Considering there would be no way we were driving in city we gladly accepted the offer and left directly from the agency office in search of some lunch and a small bit of sight seeing. After a quick bite we were off to see Humayun’s Tomb. After quickly referencing the LP we learned that grounds contained several Mughal tombs dating to the 16th century and were an excellent representation of Persian influenced Mughal architecture. We saw our first glimpses of red sandstone and white marble which would soon become the dominant theme in the great forts and palaces of Rajasthan. After our leisurely stroll through the grounds our driver, Surat, swept us away to see the President’s home and offices. On our way back to the hotel I asked if Surat could help me find a SIM card for our iPhone. We dropped Catherine off at the hotel to begin preparing for her birthday dinner celebration while I grabbed passports and ran back out to get a local phone number and sign the final paperwork for our upcoming tour. 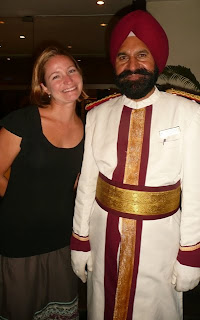 Ignoring our tour operators advice for a restaurant we followed the LP’s advice to Delhi’s most romantic table for Catherine’s birthday at Sevilla. Dinner was Italian/Spanish influenced tapas in a beautiful garden wrapped in gauze curtains and splashed with clever lighting techniques. The food was amazing and we scored a remarkable bottle of wine. Happy Birthday my love! 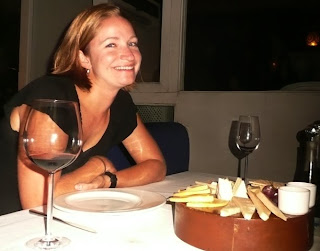 Knowing we would have a late night we asked to be picked up the following day at a leisurely 11:00am to wrap up our tour of Delhi. Our outing began in Old Delhi which was self describing as we passed over the bridge from New Delhi and landed in almost medieval streets of Delhi’s original origin. Rickshaws, bikes, scooters, and delivery trucks swarmed over every inch of road as Surat informed us that we would park the car and take a rickshaw towards the sights. Due to the ongoing 2010 Commonwealth Games it turned out that Surat would have to escort us (with his official tourist driver documentation) and so we loaded up in two bicycle-rickshaws. Catherine and I clenched our hands and teeth as we entered the maddening traffic of Old Delhi with no protection other than a seat powered by two pedals. We quickly determined that the best strategy was to stay completely focused forward and try to ignore everything happening elsewhere around our small cart. 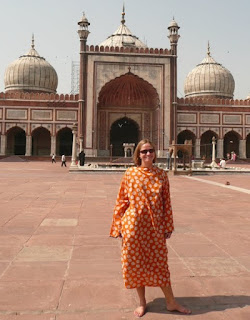 Ten minutes later we pulled into a turn off leading to the Jama Masjid mosque. Surat told us to walk into the mosque and that the only fee would be R50 to take the camera with us. We made our way down the path leading to the mosque’s entrance past vendors, beggars, and a ton of trash. Passing through a basic security checkpoint we marched up the large set of stairs where we were quickly approached by a guy with yellow and orange moomoo looking garment which we quickly draped over Catherine (who was really bitter considering she’d had the foresight to dress covering her knees and shoulders). I was next and found a sarong being wrapped around my waist to cover my knees. We have visited several mosques on our trip and weren’t horribly surprised to learn that we needed to cover ourselves more thoroughly so it seemed reasonable when another guy at the gate asked us for R200 each for the clothing and entrance fee. We decided to just “go with it,” ditched our shoes, and headed into the mosque. After a good bit of laughing at our new outfits we snapped a few pictures and headed back to rendezvous with our rickshaw. Surat asked us if we liked the mosque, we nodded, and mentioned the R200 fee so that he could inform his future clients. He rolled his eyes and said “no” there is not a fee—oh well, we had been duped for our first time in India. 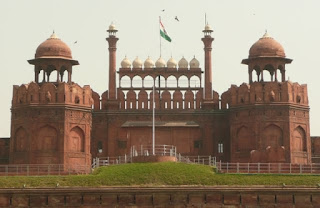 A quick ride down the street we arrived at the Red Fort which to this day remains a prominent location for political speeches and state events. The grounds were vast and included a really neat covered bazaar which was apparently pretty state of the art in the 1600’s. Inside the fortified walls we saw the Mughal leaders living quarters, mosque, hammam, and hall of public audiences alongside several British built military buildings that followed several hundred years later. We found the most interesting part of this visit to be the fort’s museum which told the long story of India’s struggle through hundreds of years of invasion and ultimate independence in 1947. The quick history lesson turned out to be the perfect introduction to our next stop at the Gandhi Smriti. 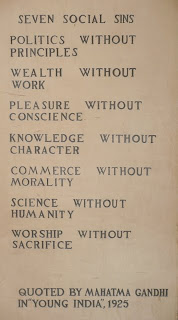 It is not until you find yourself climbing up the slope overlooking the memorial to Mahatma Gandhi where he took his final steps that you are struck with the overwhelming respect and dignity the entire country holds for the man. The mood is a reverence similar to what many Americans feel when walking into the Lincoln or Jefferson memorials in Washington, DC; however, it feels much closer and more real. Perhaps this is because Gandhi walked this planet not so long ago and his story is captured so crisply in history. We made our way around the unpretentious Martyr’s Column and reflected upon the plaque outlining Gandhi’s seven social sins.

Just down the road was a small museum dedicated to remembering the life and works of Ghandi. Catherine and I had actually just seen the movie “Gandhi” this past year and new a little bit about his history. We were enthralled with the museum and took time to read the majority of the exhibits which included the somber memorial housing the blood stained cloth he wore during his assassination. While I may not agree with every aspect of Gandhi’s philosophy I still find him to be one of the most influential people in modern times and cannot help but admire his life. It is amazing that someone was able to sacrifice so much in the name of legitimate advancement of society without having it shrouded in religious dogma.

Toured out for the day we grabbed a very late snack and made our way back to the hotel to catch up on email. We found a restaurant where we could eat what we figured would be our last non-Indian meal for a long time and retired for a good night’s rest. 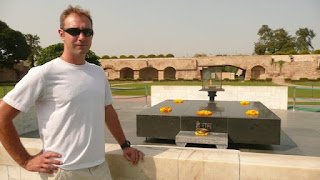