Arrival in Delhi: Rough Start to the Sub-Continent 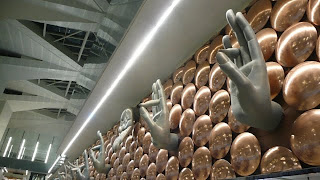 The first week or so in India was kind of rough. There were all of the usual getting-to-a-new-place-and-adjusting-to-the-culture issues, but we were also more than a little travel-weary.

I know I know, no one wants to hear about how we get tired and fed up and want to go home sometimes, but I'm writing a blog entry about it anyway. This one was definitely the worst since Morocco where we seriously considered aborting mission. However, in retrospect, I think all of our issues in Morocco were just severe culture shock for me: first time to an Islamic country, first time to Africa, first time being somewhere where it's really not always very pleasant to be a woman, first time wearing long pants in 100+ temperatures, first time being hustled/hassled 90% of every day, blah blah blah.

Anyway, I got over it; we settled into our travel groove and decided to keep going. We didn't love everything, but we figured out how to handle things on a daily basis and how to make our plans going forward.

I think the week in Cape Town caused our setback. We'd gotten used to developing countries and Madagascar was definitely some of our most rugged travel so far. But in Cape Town, we basically got a taste of "home". I don't mean that it was more western, although that was definitely a big part of it. We had an apartment in a nice little part of town. There was a kitchen, a tea kettle, everything we could possibly need within walking distance: grocery stores (yes, more than one even!), video rental, restaurants, the waterfront, hair salons... Everything else was either cheap and easy public transportation or a reasonable cab ride away. And it was always relatively safe (even that night that we came home to the transvestite waiting outside the entrance to our apartment building). It was just really easy and nice to be on our own schedule at all times.

Then we arrived in Delhi and nothing seemed easy or on our terms anymore. We'd decided before we got here that we were definitely not going to plan anything and just take each day as it came. We did have a rough plan that we wanted to see a bit of Rajasthan and the Taj Mahal, take the overnight train to Mumbai, and then gradually work our way south by train.

However, as we ran all over town trying just to figure out how to get a freaking train schedule, our nerves started unraveling a bit. Were we going to be able to figure all of this out on our own? There are a million train stations in Delhi, first of all. And much as we like to consider ourselves low-maintenance, we really are not 22-year-old backpackers who are content to stay in hostels sharing bathrooms and partying all night. And I like to feel like there is a good chance that our bed is *not* infested with bedbugs.

After being pointed in the direction of and led inside more than one private travel agency, we finally tracked down the government travel information center. The woman helping us said basically what Mr. Travel Agent had said: Rajasthan was impossible to cover entirely by train, we should consider hiring a car and driver. Then we could travel the coast by ourselves. She sent us on our way with the name of a government-approved travel agency.

We sat in Sharma's office for over two hours while he planned out our entire remaining 5+ weeks in India. Within about 20 minutes, we'd explained to him that we only wanted his help in hiring a car to cover Rajasthan. No problem, he'd keep that part at about 2-1/2 weeks. Completely gone from our minds was the fact that we did *not* need to see every palace in "India's Most Colorful State", we could just take the train where we pleased and get on to Mumbai when we were done. His proposal seemed so reasonable and, honestly, reasonably priced. We wound up signing up for fifteen nights of driving around Rajasthan--we'd leave in two days. In the meantime, we could have his driver for the afternoon to grab some lunch (it was now after 2 PM) and see Humayun's tomb. After that, we could finalize all of the arrangements.

I didn't mention that this was my birthday. By the time we were done with all of this, we had about enough time to clean up and go to dinner. Over dinner, we talked about how it totally made sense from an efficiency point of view to do this tour of Rajasthan. This would be the sightseeing part of trip and then we'd head south and do our own thing at our own pace until our visas expired. Hell, if we didn't want to leave Goa, we wouldn't!

We spent the next day with a "free" sight-seeing tour of Delhi--a complementary day with our driver for the longer trip. By the end of the day we were exhausted and dreading the next two weeks. I know that no one wants to hear it, but constantly traveling like a tourist is exhausting. Unless you have the "woohoo vacation!" adrenaline associated with most trips, jet lag takes a while to get over and schlepping around to tourist sights gets really old. I'm not saying we don't enjoy it, because we do, but it needs to be spaced out and interspersed with "normal" things like reading, being online (especially to plan next steps), watching movies, exercising, etc. Being on vacation 24/7 is impossible and we'd figured that out in our first couple of weeks on the road. I think a lot of what makes that hard is being on someone else's schedule. Even if you are doing things completely on your own, you still have to deal with things like business hours--just stuff you wouldn't think about if you were in your own house with a stocked fridge and drinkable tap water.

Anyway, we spent the first week in India totally miserable. I'd like to blame at least some of it on jet lag, but I think most of it was just readjusting to "traveling" again. But something happened yesterday when we got to Jodhpur and now we're really enjoying the trip. The palaces and temples are amazingly beautiful and I'm starting to see that the reason people call India "magical" is not *just* because somehow there are not traffic accidents every seven minutes.

However, we're still *really* looking forward to arriving in Goa on 10/28 and doing our own thing again. And we may skip the palace and temple tours in Udaipur on Wednesday to take yoga and cooking classes. :)
Posted by Catherine at 7:55 AM